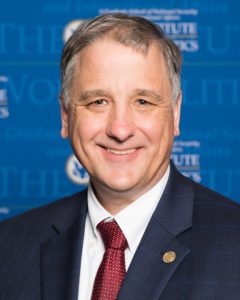 In January 1998, Curt Klun began his federal service at the U.S. Department of Justice as a program analyst in the Drug Enforcement Administration’s (DEA) Congressional and Public Affairs Section.  A year later, he volunteered to move to DEA’s Special Operations Division (SOD), where he served for fifteen years.  The mission of SOD is to exploit drug trafficking communication structures and then coordinate counter-drug operations among twenty-seven foreign and federal law enforcement and intelligence agencies.  While serving at SOD, Mr. Klun received four Exceptional Service Awards for direct operational support and business processes analyses.  In August 2012, Mr. Klun was identified as a future senior leader and was selected as one of three DEA employees to participate in the prestigious Department of Justice’s Leadership Excellence and Achievement Program (LEAP).  Following graduation, he established the LEAP Alumni Council and served as its first chairman in 2016.

In August 2014, Mr. Klun received a promotional transfer to DOJ’s Organized Crime Drug Enforcement Task Forces (OCDETF) Executive Office, where he serves as a senior policy analyst.  His duties include formulating, and facilitating, evaluating national-level strategic policies, guidelines, initiatives, and plans, related to transnational organized crime.  From April 2019 to September 2021, Mr. Klun was detailed as a Strategic Planner to the U.S. Council on Transnational Organized Crime to spearhead the establishment of whole-of-government strategic intelligence and planning capabilities against transnational organized crime as a national security threat in support of the 2019 National Security Strategy and the Presidential Executive Order 13773 on Enforcing Federal Law with Respect to Transnational Criminal Organizations and Preventing International Trafficking.  In September 2020, Mr. Klun transitioned to a second White House detail to the Office of National Drug Control Policy (ONDCP) and on the ONDCP’s United States Interdiction Coordinator’s staff.  Mr. Klun’s year-long detail was extended, and he is strengthening OCDETF’s programmatic and Strike/Task Force ties with ONDCP, its National Drug Control Strategy and National Interdiction Command and Control Plan as well as High Intensity Drug Trafficking Areas Program and The Interdiction Committee.  Concurrently, Mr. Klun is a tier-one writer of the Joint Concept for Competing, which is an interagency team working with the Department of Defense’s Joint Staff for Irregular Warfare to craft doctrine and implementation framework for competitive statecraft.

In addition to operational activity, Mr. Klun has been very active in efforts to analyze and improve the Federal interagency national security process.  Between 2008 and 2010, Mr. Klun wrote a case study for the nonpartisan Project on National Security Reform, entitled War on Drugs: Lessons Learned from 35 Years of Fighting Asymmetric Threats.  This case study concerns the challenges in fighting asymmetric threats, such as drug trafficking and terrorist networks, which require agencies to form better lines of communication and coordination.  Mr. Klun has briefed his research and findings to audiences at the Congressional Research Service, Central Intelligence Agency, Marine Corps Command and Staff College, and the University Club of Washington.  In addition, Mr. Klun served as Secretary and a Board of Directors member for the Loudoun Crime Commission between 2010 and 2012.

Mr. Klun received his Bachelor of Arts in Humanistic Studies from McGill University in 1995. He earned in 2002 a Master of Public Administration degree with honors from George Mason University, and Mr. Klun is a 2006 Distinguished Graduate of the Marine Corps Command and Staff College, where he received a Master of Military Studies degree with honors.  Mr. Klun is pursuing a Doctor of Statecraft and National Security degree at The Institute of World Politics and plans to complete his degree requirements by December 2022.  His area of study focuses on strategic integration of the instruments of national power and state use of and defense against human networks.

Mr. Klun resides in Herndon, Virginia with his bride, Amy, and their two children, Julia and William.

Read an IWP interview with Curt

Learn more about the Doctor of Statecraft and National Security program