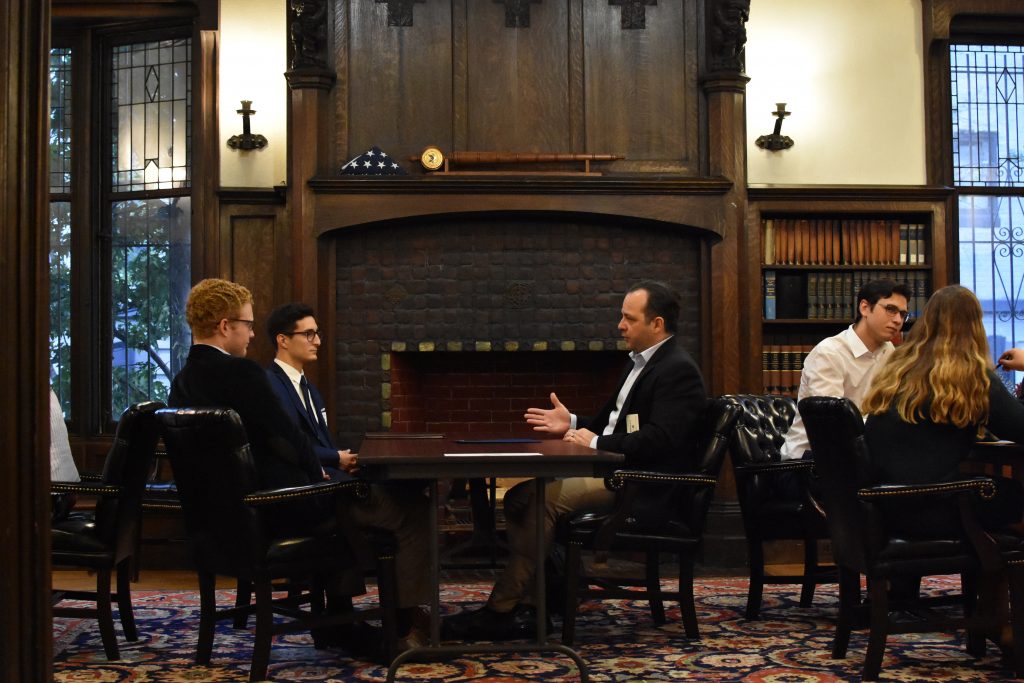 The Institute of World Politics (IWP) is unique among graduate schools, filling several educational needs with a curriculum offered by no other academic institution in America, and perhaps the world.

This curriculum is designed to prepare students to be effective leaders in statecraft, national security, and foreign policy. It includes the study of all the instruments of power and how these instruments are integrated at the level of grand strategy. These include: diplomacy; military strategy; opinion formation and public diplomacy; intelligence and counterintelligence; psychological strategy; political action and po­litical warfare; economic strategy; moral suasion and other forms of “soft power;” and effective leadership.

The Institute’s curriculum exposes students to the full spec­trum of international realities, including history, political culture, the practices of foreign powers (including those that exceed traditional dip­lomatic norms, such as aggression, espionage, propaganda, deception, treaty violations, weapons proliferation, etc.), current and potential threats, and the strategic role of ideas, values, and belief systems in world politics. In doing so, the Insti­tute’s courses examine subjects that the academy, the official foreign policy and national security culture, and its training centers, rarely do on a systematic basis.

The quality of instruction at IWP is enhanced by the fact that almost all its faculty members are scholar-practitioners with both academic credentials and high-level experience in the subjects they teach. These include ambassadors, senior intelligence officials, military officers, presidential advisers, and senior congressional staff members.  Many courses have occasional guest lecturers, many of whom are prominent figures in government and the broader policy community. Several of the faculty occupy senior positions in government, but continue to teach at the Institute as well.

The Institute’s student body includes recent graduates of col­leges and universities from the United States and around the world and a mix of mid-career professionals from government, the armed forces, industry, and foreign embassies and governments, whose various per­spectives enrich the classroom experience.  IWP has special relationships with several U.S. government agencies and the U.S. Armed Forces, which send their personnel to the Institute for study in degree programs, certificate programs, fellowships, and internships.  The U.S. Naval War College has approved 92 percent of the Institute’s courses as eligible electives for its students.  IWP is the only academic institution outside the U.S. Army War College that has been authorized to teach strategy to the Army’s corps of strategists.  The U.S. Army has also qualified IWP as one of only a few academic institutions eligible to host colonel-ranked officers as Senior War College Fellows, where a tour at IWP substitutes for attending the Army War College.

The Institute offers more hours of contact between students and professors than most other schools in related fields.  Its relatively small size enables professors and students to get to know each other better and to have more in-depth discussions, enhancing the learning experience and permitting students a greater opportunity to inspire their professors to write them more credible recommendations and make enthusiastic efforts to help them find professional opportunities.

Finally, the educational philosophy of the Institute, based on a recognition of the need to cultivate civic virtue and responsibility in the exercise of power, distinguishes itself from the widespread utilitarian­ism, relativism, and moral neutrality present in contemporary culture. All these factors unite to create the unique purpose, curriculum, philosophy, and method of instruction that are to be found at The Institute of World Politics.