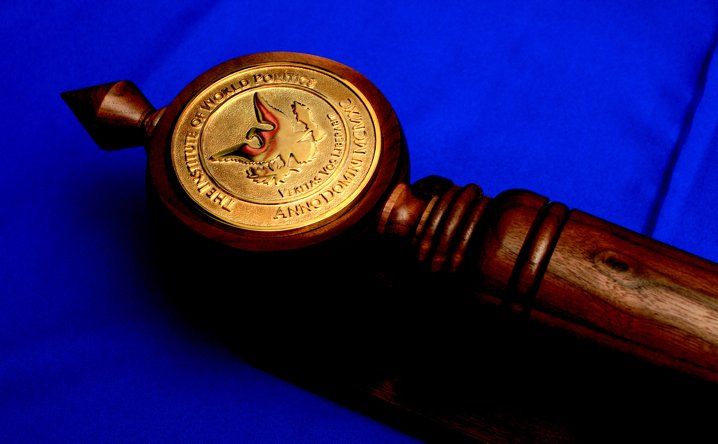 The Institute was founded to fill a major national need for professional education in statecraft and national security affairs that in our estimation has not been filled satisfactorily by any other institution of higher learning.

The logic underlying the Institute’s curriculum proceeds first from a concern that many instruments of power are rarely studied before people conduct professional work in the various fields. This is very much a function of the regnant foreign policy and national security cultures, with their established career patterns and incentives focusing excessively on arms, money, and the diplomacy concerning them, while neglecting many other instruments of statecraft that are decisive in the successful pursuit of a secure peace. It also derives from patterns of education and research in the academic and public policy research worlds that, for various reasons, exclude the study of certain instruments of power.

These other instruments, which must be strategically integrated with military and economic capabilities, principally involve the non-material dimensions of power and politics, such as: intelligence and counterintelligence; information, strategic communications, ideas, and belief systems; various forms of foreign public engagement, including maintaining human relationships and respecting the dignity of foreign peoples; keeping faith with allied peoples and countries; and the exercise of leadership, including the cultivation of patriotism, civic virtue, moral and strategic clarity, the exhibition of the will to defend national interests, and standing for certain first principles. Knowledge and mastery of these dimensions enable leaders at various levels to prevent war successfully and secure vital national interests while minimizing the need to use force.

Certain specific instruments of statecraft have particularly suffered from neglect, underutilization, or distortion due to lack of study or the influence of bureaucratic-political culture within government agencies:

• One is public diplomacy and its many components. The recent practice of diplomacy focuses disproportionately on relations with foreign governments. Meanwhile, high-level strategic attention and academic study are almost never devoted to relations with foreign publics through such vehicles as international broadcasting, information programs, exchanges, visitors programs, cultural diplomacy, certain forms of foreign assistance, and political action. Yet, it can be argued that today, in an information-based age of mass communications and mass movements, the dynamics of international politics – especially from a long-term perspective – rest as much on public diplomacy as on relations with governments.

• Perhaps the most important element of U.S. public diplomacy over the years has been the American message of freedom, hope, opportunity, and concern about the welfare of others, with the attendant policy of not seeking conquest or domination. When this message is accompanied by a policy of treating foreign peoples with dignity, respect, and justice, it is arguably one of the most powerful political messages that can be transmitted on the world stage. But when this message is either not sent, obscured by failure to transmit any of its components, or compromised by policy actions that undermine natural sympathy for these ideas, relations with foreign publics can severely deteriorate. The systematic failure to include a significant public diplomacy component into national-level integrated strategy is all the more deplorable in light of the spectacular strategic successes of this form of diplomacy in the past.

• Defense against foreign propaganda and disinformation, is a related neglected field. Perceptions management of these types is a major preoccupation of the statecraft of many foreign countries and movements. In contrast to normal public diplomacy, it often involves dishonest manipulation of the truth. Despite the remarkable effectiveness of these activities, the United States and other Western countries have systematically failed to study the entire subject of propaganda and to develop defenses against them. The result has been a greater vulnerability to foreign attempts to distort accurate perceptions of reality and to influence policies that result from those perceptions.

There is the related problem of defending against strategic deception as well as overt and covert political influence operations.  It was 2,500 years ago when Sun Tzu counseled that an effective way to defeat a foreign enemy is to place lies on the desk of the enemy king.  If the king can be persuaded by them, he will act against his own kingdom’s interests.  This is a dimension of counterintelligence which has long been neglected by the national security community.

• As diplomacy has been frequently bereft of a public diplomacy dimension, so too has defense strategy been missing a strong integration with the political and psychological dimensions of military art. While the U.S. Army does conduct certain information operations, military information support operations (formerly called psychological operations), and “hearts and minds” operations in counterinsurgency warfare, these capabilities have historically been a tertiary consideration in overall defense planning. Until recently, the same could be said of various types of civil-military and stability operations involving such things as: reconstruction; medical, education, and agricultural assistance; inter-religious dialogue; and other forms of community relations. Similarly, political warfare and the capacity to conduct “wars of ideas” are orphans in the defense and foreign policy establishments in the United States (and other Western democracies), with no agency or policy leadership specifically charged with a continuing responsibility for such activities, especially in their strategic dimensions.

• Another neglected element of statecraft is the proper incorporation into national strategy of the lessons of history. American universities have presided over a significant decline in the study of history, particularly intellectual, political, religious, dip­lomatic, military, and economic history. Insofar as any aspect of history has been promoted in recent years, it has been social history, but all too often bereft of the larger political context. Particularly severe has been the lack of focus on military history. The consequences of this trend can only be damaging to our nation’s ability to conduct its national security policy. The study of military history reveals not simply the lessons of the actual conduct of wars, but those concerning the causes and politi­cal-diplomatic circumstances of wars. Ignorance of military history has affected not only military performance but also the decision making of civilian authorities who have been involved in launching military en­gagements. Given that errors in matters of war and peace are the most costly errors that can be made by our national leaders, prudence should dictate greater professional knowledge of one of the most important relevant fields of study.

• While diplomatic history is a longstanding field of study – albeit precipitously less so in recent decades – the art of diplomacy is rarely studied. Cultivation of this art is usually done through on-the-job training. It is thus very much a function of the bureaucratic cultures of the U.S. Department of State and other foreign ministries, which rarely integrate it with other instruments of statecraft. For example, while diplomats are frequently involved in decisions to use force, they rarely study military strategy and its proper integration with diplomacy and political action.

• In the field of economics, foreign policy practice has historically focused principally on trade, aid, and finance, while neglecting other elements of economic strategy such as: financial and technological security policy; strategic materials policy (including energy policy); defense industrial infrastructure policy; sanctions, boycotts, and embargoes; the use of monetary policy as a weapon; other offensive and defensive elements of economic warfare; and the integration of economic statecraft with public diplomacy.

• In the specific field of foreign aid and development, assistance to foreign governments to secure political support of foreign policy – while often a worthy strategy – usually serves as a substitute for aid that truly ameliorates the condition of impoverished peoples. When the U.S. grants anti-poverty aid, it has historically given financing to state-directed (rather than private) development projects. While this practice has undergone some change, the continuing logic of aid strategy may have the effect of encouraging the recipient state to make investment decisions accord­ing to political rather than economic criteria, thus fueling cronyism and corruption, and the continued or even increased impoverishment of the population. Creative strategies for humane, market-oriented solutions that result in permanent job creation and the elimination of misery are difficult to implement. This is partly explained by the tendency to ig­nore the public diplomacy elements of foreign economic policy.

• Until recent years, few intelligence officers studied intelligence before embarking on a career in this field. While this has changed slightly with the rise of intelligence studies in various universities, it still remains the general rule. Elements of this subject that are rarely studied are the history of intelligence, the relationship between intelligence and policy, intelligence epistemology, deception, the role of cultural bias in analysis, and “opportunities intelligence”-i.e., that which concentrates not so much on threats but on information that can assist the exploitation of political, diplomatic, military, or economic opportunities.

• Few study protective security policy – the setting of national priorities of valued assets that must be protected, as well as cost-benefit analysis of alternative policies – before going into professional work in this increasingly important field.  Insofar as it is increasingly studied – particularly in the area of cyber security and the protection of national security secrets and intellectual property – it rarely incorporates a meaningful counterintelligence dimension, which is especially needed in the cyber realm.

• While lip-service is given to solving foreign policy problems with a “whole of government” approach that uses “all the instruments of national power,” in fact, this approach is scarcely used in practice and few people in the field actually study how to develop and implement a genuinely integrated strategy.  In teaching the instruments of statecraft, the Institute believes that it is essential to cultivate integrated strategic thinking. For most practitioners of statecraft who are involved principally in the implementation of tactical components of a larger strategic policy, this means being able to understand the strategic context. When properly understood, the making and implementation of policy can be done in concert, rather than at odds, with overall national strategic objectives.