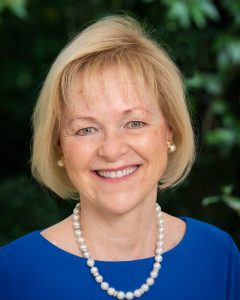 Ambassador Aldona Z. Woś was born in Warsaw, Poland. Her father survived Flossenburg Concentration Camp, and her mother survived Nazi Germany’s child slave labor. Her father, Paul Zenon Woś, was a member of the Polish Home Army and recipient of many distinguished awards, including the “Righteous Among the Nations” medal from Yad Vashem.

In 2002 and 2004, President George W. Bush appointed Ambassador Woś to the U.S. Holocaust Memorial Council. In 2004, she was appointed as the U.S. Ambassador to the Republic of Estonia. During her tour, she focused on winning the hearts and minds of the next generation of Estonian leaders, Russian integration, HIV and AIDS prevention, and the preservation of Estonian culture. For her service, Ambassador Woś was awarded the Order of the Cross of Terra Mariana 1st Class by the President of the Republic of Estonia, the Distinguished Service Cross of the Estonian Defense Forces, and the Cross of Merit of the Estonian National Police Board. In 2007, she received the Commander’s Cross of the Order of Merit of the Republic of Poland. In 2008, she was presented the Ellis Island Medal of Honor. She was invested in the Sovereign Order of Malta in 2010.

Ambassador Woś earned her M.D. at the Warsaw Medical Academy and completed her internship and residency in Internal Medicine, including a fellowship in Pulmonary Medicine, in New York City. Her career as a doctor included private practice, corporate medicine, clinical care, teaching, and consulting for both hospitals and private industry. She holds an Honorary Doctorate of Laws from The Institute of World Politics and an Honorary Doctorate of Humanities from Greensboro College.