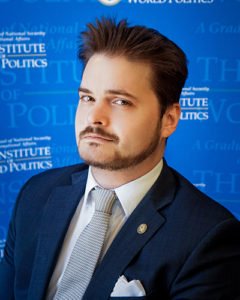 Tim Stebbins is a 2011 graduate of IWP. After several years working on public diplomacy and political warfare strategies for the Afghanistan/Pakistan theater, he returned to IWP in 2013 to take on the role of Director of Graduate Recruitment and eventually Vice President in 2018 and Senior Vice President in 2022. During his tenure, he crafted a strategy focused on developing personal relationships with prospective students that mirrored IWP’s classroom environment. From there, he turned IWP’s sights towards the creation of strategic partnerships with universities around the country, a program that has grown to nearly 30 university and private sector partnerships.

In his current role, Tim works with all doctoral program candidates, focuses on the growth of the OGR team, and drives the expansion and IWP’s institutional outreach to achieve our strategic enrollment targets.