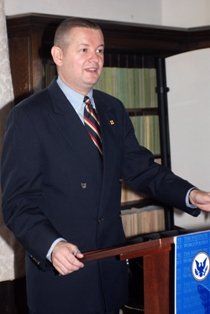 On November 14, 2009, IWP students, friends, and supporters gathered to hear the Second Annual Kosciuszko Chair Lectures in celebration of the one year anniversary of the Kosciuszko Chair of Polish Studies at the Institute. Speakers — including Dr. John Lenczowski and Dr. Marek Chodakiewicz — conveyed to attendees a vivid account of recent Polish history, current challenges in the area, and the implications of these issues for the U.S.

IWP President John Lenczowski delivered opening remarks, and explained why IWP is an appropriate home for the Kosciuszko Chair. IWP seeks to incorporate into its curriculum those parts of history that are “particularly relevant to national security affairs.” This robust research program studying the Polish-Lithuanian commonwealth and its history and culture is relevant to the studies at IWP in general because the story of this area is really a story of the defense of civilization. Poland has a tradition of morally ordered liberty that is rivaled by few nations other than the United States.

The next talk was given by Dr. Marek Jan Chodakiewicz, the current holder of the Kosciuszko Chair. He discussed “Transformation, 1988-1992: The Case of Poland.” He explained that, in the area of the Polish-Lithuanian commonwealth and the Intermarium region, the old Soviet structures were not entirely dissolved, but instead, merely transformed. He described the events that led to and immediately followed the demise of Soviet power in those regions.