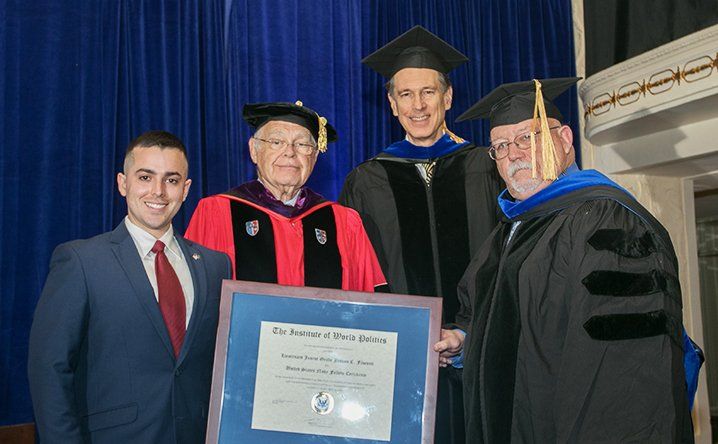 LTJG Joshua Fiveson, who served as a Navy Fellow at IWP during 2015-16, was recently selected as a John Marshall Fellow at the Claremont Institute’s Center for Constitutional Jurisprudence.

The fellowship involves “intensive seminars in American political thought and jurisprudence … with a specific focus on the origins and development of American constitutional jurisprudence.” When asked about his selection, Mr. Fiveson had this to say: “I’m absolutely humbled and cannot wait to join this year’s cohort. Most of my life has been dedicated to the pursuit of truth and knowledge — concepts that our founders believed in and valued. Personally, I view this fellowship as another stone in the path towards statesmanship as it once existed, and I’m certain that my time at IWP helped make the opportunity a reality.”

Mr. Fiveson is currently an officer in the United States Navy Judge Advocate General’s Corps and is stationed at Naval Base San Diego. There, he serves as a legal advisor to the commands within Navy Region Southwest and represents the Government at hearings pertaining to officer and enlisted misconduct. Prior to this, Mr. Fiveson served as an attorney advisor for Judge Kevin Ohlson at the U.S. Court of Appeals for the Armed Forces, a judicial law clerk for Chief Justice Nathan Hecht at the Supreme Court of Texas, and a law clerk for the Counter-Terrorism Section of the U.S. Department of Justice’s National Security Division. Mr. Fiveson holds a B.S. in Criminology, Law, and Society from George Mason University, a J.D. from Harvard Law School, and he is a graduate of the National Security Law Institute at the University of Virginia Law School.

While at IWP, Mr. Fiveson focused his research on constitutional and international law and the junction of the two as they weigh on U.S. foreign policy and counter-terrorism strategy.