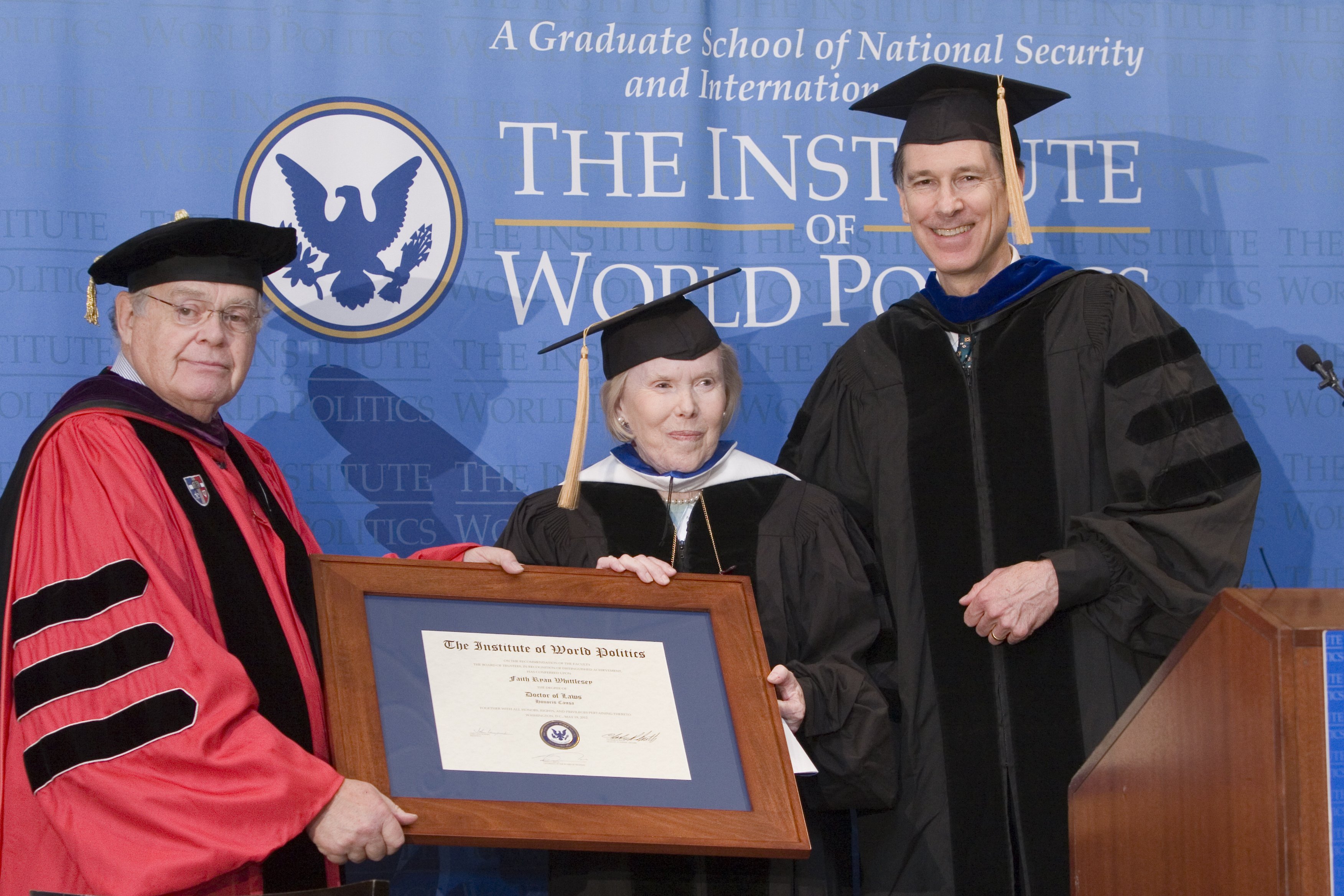 Above: Amb. Faith Whittlesey received a Doctorate of Laws Honoris Causa from IWP in 2012.

Poise. Charm. Tenacity. Grace—all of these words represent adjectives frequently used to describe former U.S. ambassador and The Institute of World Politics’ first Chairman of the Board, Faith Ryan Whittlesey, who passed away at her home on May 21, 2018, surrounded by family and loved ones, after a long battle with cancer.

Amb. Whittlesey leaves behind a formidable legacy of political success—before finding her way into the IWP family, she served as an Assistant U.S. Attorney, became a two-time member of the Pennsylvania Legislature and Delaware County (PA) Council Chairman, served as U.S. Ambassador to Switzerland twice: from 1981-1893, and again from 1985-1988.

In the two-year period between her ambassadorial positions in Switzerland, Amb. Whittlesey served as the Assistant to the President and Director of the Public Office Liaison on the Senior White House Staff.  There, she became the highest-ranking woman to serve in Ronald Reagan’s White House.  In this position, she was personally responsible for maintaining relations with all of the different constituent groups across the United States, ranging from ethnic groups, religious groups, business and labor groups, and beyond.

It was in this position where her close relationship formed with IWP Founder and President John Lenczowski, whom she invited to brief these groups. As a result, Dr. Lenczowski gave over 65 speeches annually from the White House platform in order to help advance the President’s policies to address U.S.-Soviet relations.

“She bore more crosses in her personal life than almost anyone I knew, but she was indomitable,” Dr. Lenczowski remembers, referring to personal events including the loss of her husband, leaving her to raise three children by herself. “She was a patriot who loved America, and strongly believed in a foreign policy of peace through strength and in winning without war.”

Amb. Whittlesey channeled this passion into her advocacy of human rights and the pursuit of freedom while simultaneously working tirelessly to run the Administration’s principal information effort in support of the anti-communist resistance in Central America—particularly in Nicaragua and El Salvador.

After leaving government service, Amb. Whittlesey maintained her close relationship with Switzerland and entered the private sector of diplomacy by becoming the Chairman of the American Swiss Foundation, an organization dedicated to promoting strong relations and mutual understanding between the United States and Switzerland.  Here, she helped create the Young Leaders Annual Conference, which was a model of successful public diplomacy.

As Dr. Lenczowski was planning the establishment of IWP, he discovered that a new institution cannot even apply for accreditation until it has in place both a degree program and a student body ready to graduate from an unaccredited school.  To navigate around this barrier to market entry, he needed to establish an academic partnership whereby IWP students would receive academic credit and a transcript from an accredited institution.  It was Amb. Whittlesey who introduced him to Dr. John Silber, the legendary President of Boston University, who eventually agreed to a partnership with the fledgling school.  This partnership ultimately is what allowed IWP to have enough students to apply for independent accreditation. The University saw benefit from this partnership, insofar as IWP would bring prominent scholar-practitioners into association with the University.

Soon afterwards, Dr. Lenczowski extended Amb. Whittlesey an invitation to join The Institute of World Politics as one of its first four trustees—as well as its first ever Chairman of the Board – an offer she readily accepted.  She used her vast network to help IWP find supporters for the school, and was instrumental in helping IWP get off the ground.

During her decade of service to IWP, Amb. Whittlesey continued to use her close relationship to the American Swiss Foundation to give IWP students the opportunity to participate in the annual conference and experience other educational opportunities within Switzerland. An IWP alumna, after returning from the Conference of 2012, said she learned an enormous amount about Switzerland and its role as a close friend of the United States.

Ambassador Faith Ryan Whittlesey left an indelible imprint on IWP, and her legacy will live on through the school.  She was one of the most successful U.S. ambassadors in recent history, having become one of the most beloved Americans in Switzerland.  In the last years of her life, she was a staunch opponent of military interventions where the vital national security interests of the U.S. are not at stake.

As Dr. Lenczowski recalls, “She was one of the greatest women in America.  Many of us considered her to be our country’s Joan of Arc.  She was tireless and creative, amazingly effective in both her diplomacy and her public diplomacy, as well as in her domestic political acumen. We were incredibly blessed to have her friendship, support, loyalty, and commitment for so long.  Faith, Rest in Peace.”

To learn about her extraordinary life, see her biography by Dr. Thomas Carty, Backwards, in High Heels: Faith Whittlesey, Ronald Reagan’s “Madam Ambassador” in Switzerland and the West Wing.