Above: Kindergarteners in the Philippines with new classroom materials donated by Asia America Initiative, a nonprofit run by Prof. Al Santoli.

Receiving a modern education in Southeast Asia has been historically difficult for decades. Many barriers often stand in the way: poverty limits supplies and the number of teachers available, drug gangs and kidnappers easily cause havoc, conflict exists between Muslims and Christians, and opportunities for young women are limited.

Albert Santoli, an Institute of World Politics professor and founder of Asia America Initiative (AAI), is working to change all this by prioritizing the idea about “winning against terror without fighting.” Serving as a practicum real world model for theories in the classes he teaches at IWP, Professor Santoli has been working to promote education and provide humanitarian assistance in high poverty areas across the Philippines. A collaborative effort between his work in the field and the academic center he runs at IWP – the Center for Culture and Freedom – offers students access to a rare combination of this field experience and accompanying research.

Since his return to the U.S. from a working visit to the Philippines in August 2018, Professor Santoli has moved forward with his new “transformative classroom” program. This is part of the cultural engagement strategy for encircling vulnerable population centers with “fortress or peace zone” schools that deny radical recruiters a receptive population for their subversion campaigns.

The program is working to bring to life creative learning environments, starting with kindergartens plus one additional classroom, library or playground in more than two dozen elementary schools in high poverty areas of Muslim Mindanao and Christian Visayas in the Philippines. AAI is partnering with local school teachers, local village officials, and corporate foundations to maximize its resources.

In some of the communities where AAI works, police, soldiers, and local guerillas protect the schools and teachers from harm by radical kidnappers and drug gangs. Parents come to schools to cook for their children, and some of these schools teach children to garden, with AAI providing seeds and garden tools. A few AAI schools have received national honors and designation as “model schools” for their gardens and creative education programs where everyone helps each other. “This is defeating terror without weapons,” comments Prof. Santoli. 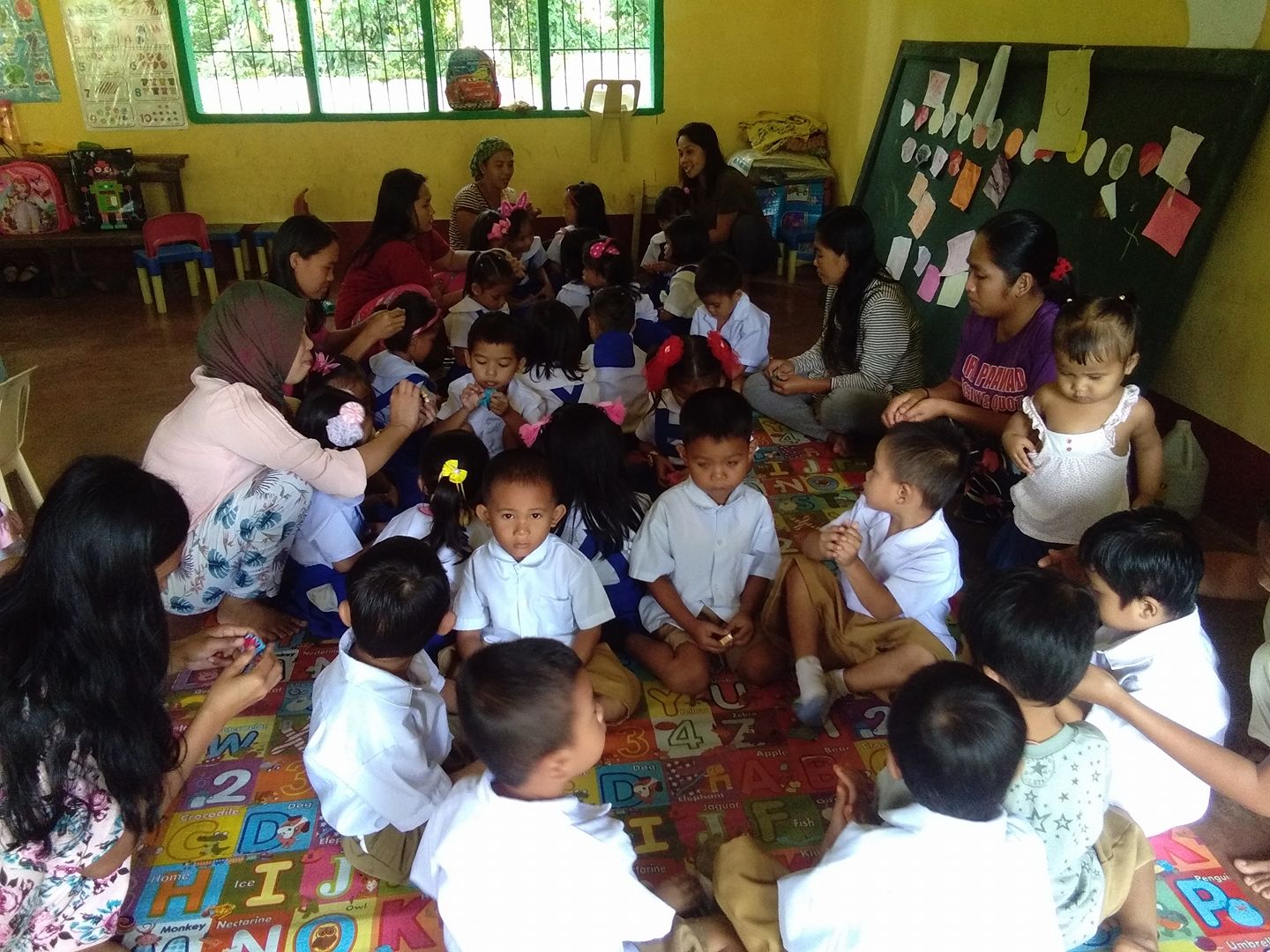 Above: Kindergarten pupils at Timbangan Elementary School using play dough donated by AAI. They are assisted by their teacher, Jalain Nurunnihar Jaohare, and parents.

On the academic front, the Center’s programs emphasize the pursuit of peace and security with an awareness of the varied cultures and historical forces that shape global events. It focuses on people-to-people interaction, mutual understanding, and humanitarian assistance as pillars for alliances against tyranny and to counter anti-American and anti-Western radicalization.

Since AAI was created in 2002 during the early stages of the wars in Afghanistan and Iraq as well as the Oakwood Mutiny in the Philippines, the organization has been dedicated to empowering communities with a focus on girls’ equality, entrepreneurship, and transforming a “charity mentality” with a minimum of private grant funds used to inspire and empower at least 30,000 direct beneficiaries and at least 2 million community members. 75 percent of participants in AAI programs are female teachers, mothers, etc., and girls in schools that partner with AAI make up at least 60 percent of the total student population. This generates an environment with equal inspiration and empowerment for boys and girls. AAI receives no government funds, working only within the means of private donors, grant funds, and corporate giving.

In 2013, Professor Santoli was awarded the Order of the Golden Heart from Philippine President Benigno Aquino for creating “peace zones” in the most dangerous area of Southeast Asia.

Prof. Santoli (towards the center in the front) with school heads and teachers at Kasambuhan Elementary during an AAI-ISD planning workshop.