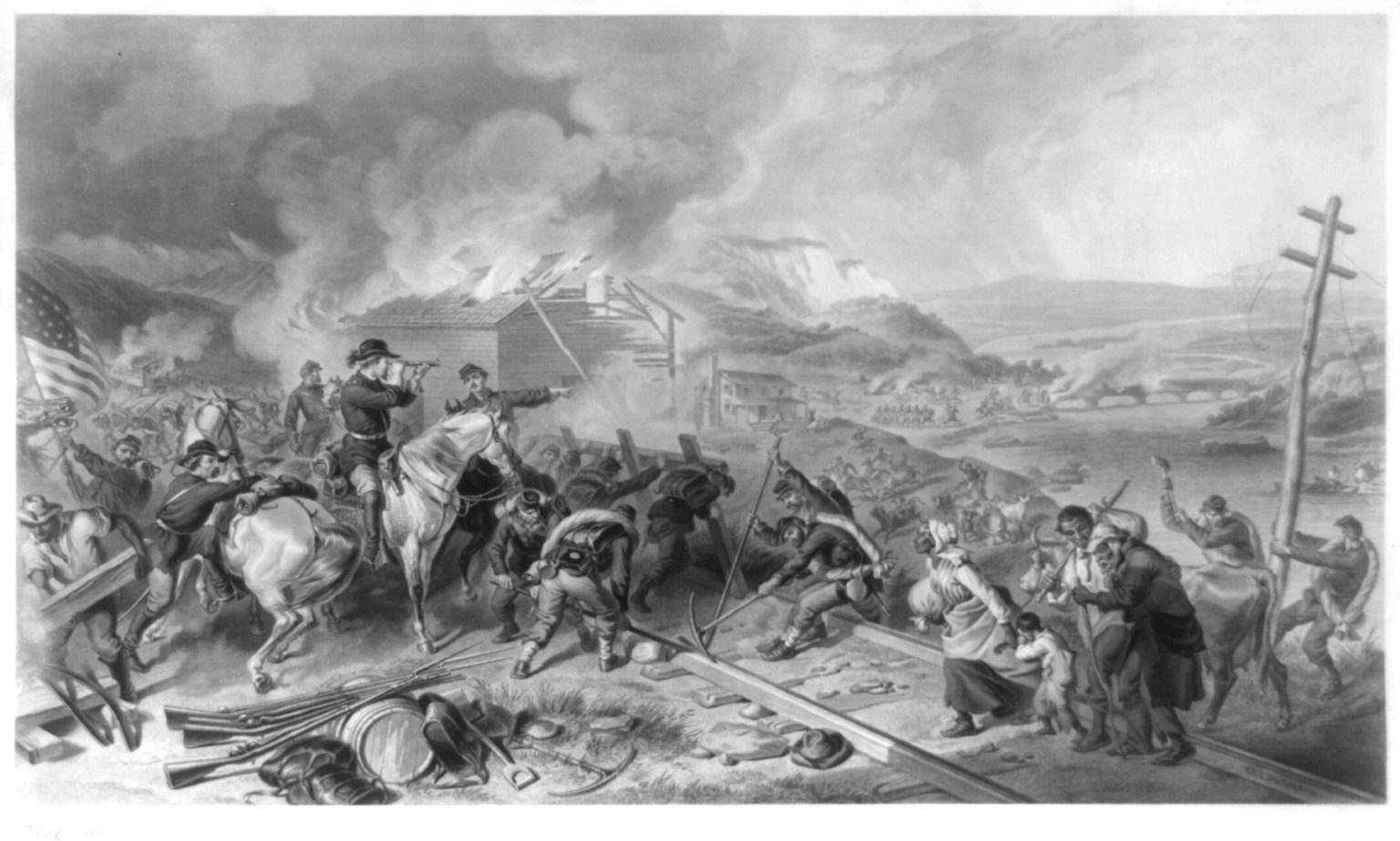 Above: Sherman’s March to the Sea, by F.O.C. Darley

Thus far, the bulk of attention in the twenty-first century on U.S. foreign policy has been the so-called “War on Terror” that began with the opening strike in 2001. Although few believe that American existence is at stake, the violence, death-toll, and societal disruption have made a lasting impression. Like Pearl Harbor, the 9/11 attacks still resonate in the body politic as symbolic of a “new age” in global politics.

There is a saying, “there is nothing new under the sun,” and it applies to war as well, including terrorist warfare. As the new century began with a terrorism “bang,” so too did the United States of America. Nor was it confined to the origins, as applied terrorism went to stamp aspects of the American “experiment” well past its national beginnings.

If this is surprising, and perhaps even shocking, one should repeat the slogan, above. The reality of guerrilla war, “unconventional,” “irregular,” and otherwise “asymmetrical” conflict has been with the world since time began. Movements and causes that lack tanks, infantry, and airplanes use what they have. That means stealth, deceit, mass-murder, torture, secrecy, and all the paraphernalia that we have come to identify with today’s terrorist thugs.

That “partisan” war, including systematic terror, was once employed by patriotic Americans against each other may come as a shock. If so, the reason is the definition of warfare that Americans have come to accept as universal.

In his massive history, The American Way of War, Russell Weigley has identified the conception of war that has arisen in the U.S. since at least the Union victory in the Civil War. Based upon the strategies employed by General Ulysses S. Grant, Americans have since come to define the nature of war as essentially the massed annihilation of the enemy’s armed forces and population. “The strategy of annihilation,” Weigley wrote, “became characteristically the American way in war.”

Grant’s approach against civilians aiding the Confederacy reflects the mindset that Americans have developed against terrorists. In his instructions to General Philip Sheridan in rural Virginia, Grant defined war as total and final: “… Give the enemy no rest. Do all the damage to railroads and crops you can. Carry off stock of all descriptions, and negroes, so as to prevent further planting. If the war is to last another year, we want the Shenandoah Valley to remain a barren waste.” Sheridan told his men, “I want you to be bold, enterprising, and at all times full of energy, when you begin, let it be a campaign of annihilation, obliteration and complete destruction.”

General William T. Sherman and his “march to the sea” perhaps expresses this strategy best. “I will make the march and make Georgia Howl,” he wrote Grant. Soon afterward, he promised to “smash South Carolina all to pieces.” He did both and remains a legend.

Ironically, the original American campaigns for independence involved exactly that aspect of conflict that Grant and the Union Army destroyed when the army had the resources. It must be emphasized that the first Americans were revolutionaries, with all the attributes that term connotes. They were fighting the world’s superpower at the time and used the weapons that they had, which included systematic terror.

The Revolution was not only a war against the British; it was also a civil war. Only about one-fifth of the total population (about 3 million) favored war; the rest favored the British (Loyalists) or were neutral. From the beginning, the Revolutionaries (Patriots) fought the British Redcoats simultaneously with the Loyalists in an internecine series of battles for control of the population. By definition, these battles were terror attacks, particularly for the civilians that got caught in the middle.

The South became the principal terrorist battleground in the war between Patriots and Loyalists (also called Tories). The southern campaigns were nearly all guerrilla in type where terrorism reached a gruesome peak. Lynchings, ambushes, and murders became a common feature of daily life. Between 1780 and 1781 in South Carolina alone, terrorist attacks claimed over 4,000 casualties. The names of guerrilla captains, Daniel Morgan, Andrew Pickens, and, most famously, Francis Marion, the “Swamp Fox,” became notorious for both the British Army and the Loyalists. Marion’s fame has since resulted in over 70 formal places — towns, schools, landmarks — named in his honor, second only to George Washington.

Historian John Shy wrote that “… neither side had the capacity of fully protecting its supporters among the civilian population, and a ferocious guerrilla war spread throughout South Carolina and into Georgia and North Carolina.”

Professor North Callahan quoted the diary of a British chaplain in revealing his shock at early American warfare:

“These Americans, so soft, pacific and benevolent by nature, are here transformed into monsters, implacably bloody and ravenous; party rage has kindled the spirit of hatred between them, they attack and rob each other by turns, destroy dwelling houses, or establish themselves by driving out those who had before dispossessed others.”

But terrorism was not confined to the South. In New Jersey, historian Robert Calhoon described Bergen County as ” … a grim twilight zone of random violence and increasing insecurity.” Patriot vigilantes, “Sons of Liberty,” rounded up and deported suspected Tories in New York City, prompting historian Claude van Tyne to write that the times were “… months of terror for the Loyalists.” He also described Pennsylvania as a place where “… Tories were cowed by a reign of terror.” Historian Howard Swiggett described warfare in the Susquehanna Valley:

“The sinister terror and suspicion which so cruelly attends civil wars enveloped the valley.  …There was something fearful in every footfall. The lone valley, pictured by so many as an Arcadia, was in reality a cauldron in the hills, boiling with greed and violence and fear.”

“Much of the fighting done by the Jersey Tories was not orthodox, to say the least. They became so desperate, and often depraved, …that they plundered friends as well as foes, warred upon aged persons and defenseless youths, …butchered the wounded while they were begging for mercy, allowed prisoners to starve, and destroyed churches as well as public buildings.”

History cannot absolve the present. But perspective helps understanding. War is war, whether it is a pistol shot that ended an empire or an atomic bomb that killed 100,000 civilians in about 30 seconds.

What’s in a name?