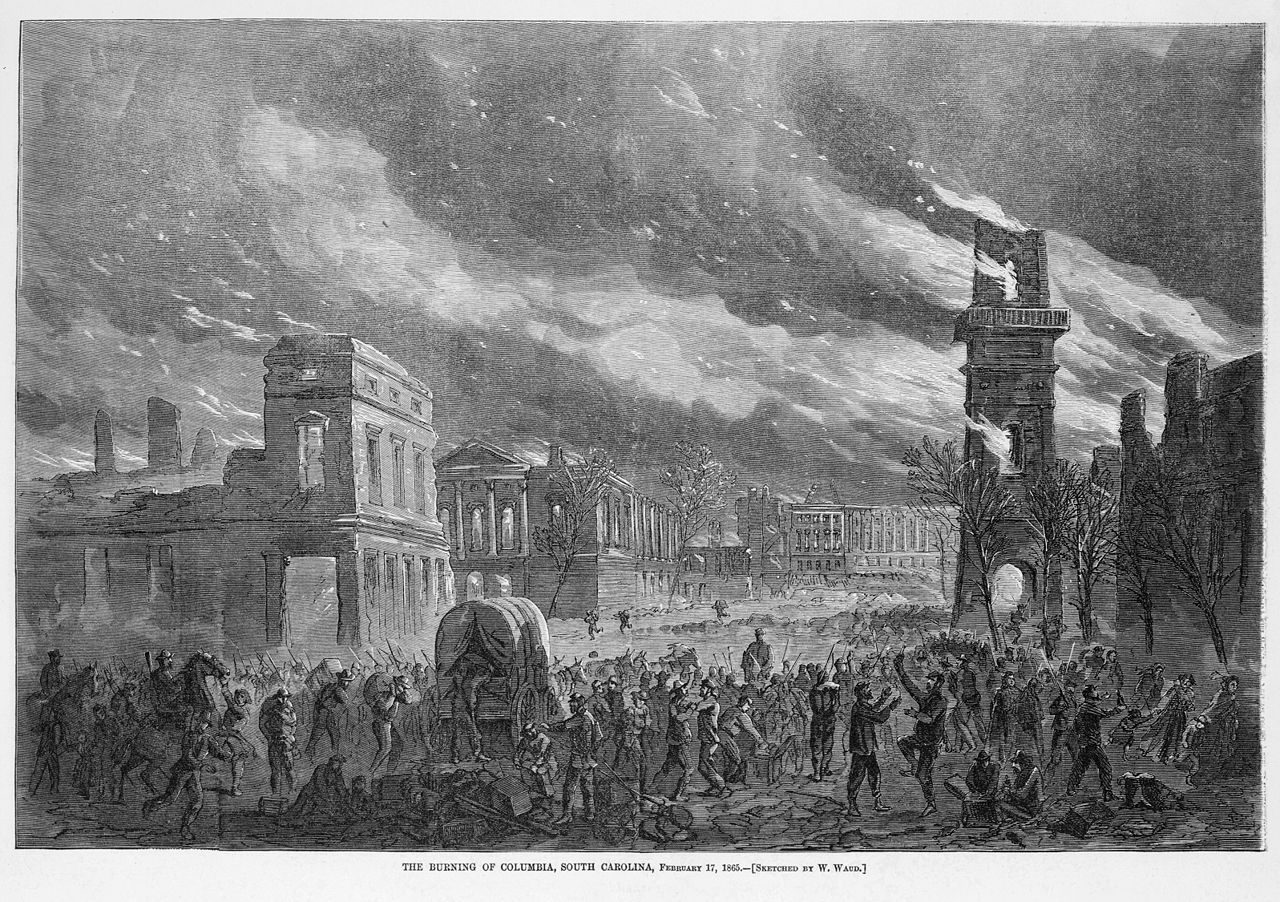 Above: The burning of Columbia, South Carolina, February 17, 1865, by General Sherman’s troops. Sketch by William Waud (d. 1878) for Harper’s Weekly.

One of the best evidences of the horrors of war, especially to the innocent, are the photos of bombed out cities after the Second World War. The destruction of once-magnificent architectural marvels such as Berlin, Tokyo, Coventry, plus the atomic bombings of Hiroshima and Nagasaki, gives testimony to mankind’s lasting capacity for horror on scales formerly unknown to rational minds.

Yet rational minds conducted such devastation, against civilians, in causes that were seen as fully justified and appropriate for the time. Years later, history has not in the least reversed that verdict. Bombing continues as a weapon of war, coming from all angles, the skies, trucks, cars, “suicide bombers,” against crowded school buildings, malls or skyscrapers.  It doesn’t matter: war is war, and terror is terror. The two cannot be divorced and, indeed, are integral, whether as tactic or strategy.

Americans have not been spared the scars of such terror, but the reality is, nevertheless, considered new and novel. The 9/11 attacks are seen by most Americans as evidence of a new and totally horrific brand of warfare, suddenly invented by Islamic radicals from distant and unknown lands with reasons unfathomable. That’s understandable. The total number of Americans killed by bombs in World War II was six: a family that happened upon a Japanese balloon-bomb grounded in an Oregon picnic forest.

By contrast: in the air “blitz” of 1940, residents of London endured 76 consecutive days of German air attacks, at times with over 1,000 planes in the sky at a cost of over 50,000 dead. In American terms, that’s 76 straight 9/11’s, non-stop! That would have made a Churchill out of anybody, even including “W” Bush.

But has America really been spared? There have been four wars inside the country since independence: two against the British, one, long war against Indians (now termed “Natives”) and one among ourselves. By far, extremely far, the only one that cost the country any serious destruction was the last one, called “Civil.” In terms of a war between two parts of the same country, it was civil (i.e.”within”). In terms of its impact upon the land and its people, it was anything but.

For casualties alone, the Civil War stands by itself. There were more combat deaths in the Civil War than all other foreign wars combined. In 1861, the population was 32 million; by 1865, an estimated 720,000 men from both sides were killed (more from disease than bullets). That’s 2.3% of the population. In today’s population of 330 million, the same percentage would yield 7.2 million dead. All within four years! The War on Terror began in 2001, eighteen years ago. By Civil War standards, that would result in approximately 30 million dead Americans fighting Islamic terror. How would the country react to that stat? How would Russian “collusion” equate?

Today, the two parties are waging political “war” against each other. Mostly, each accuses the other of always lying or being “unfit” for anything. Accusing a Supreme Court nominee of misbehaving at 17. Condemning a Vice-President for acting giddy with women. When he was Vice-President, Aaron Burr shot and killed Alexander Hamilton, a Founding Father. Now, that’s serious! Today’s political culture seems theatrical, as if a Director is on set. In historical perspective, they also seem silly. Childlike. But perspective has rarely been a political virtue.

In history, the South, alone, is the only region to have memories of the horrors of war firsthand. The memory still lingers, but time is passing quickly. The last Civil War soldier died in 1958, the last Gettysburg reunion was in 1938, and Vicksburg refused to celebrate July 4 until 1932.

The past is prologue, but experience shapes behavior. It is no coincidence that South Carolina revolted first and still remains the most “militaristic” American state.

In her penetrating book, War Upon the Land, (2012) Professor Lisa Brady (Boise State) has reminded Americans how “a foreign troop” can wreak havoc upon the people and land they have invaded. Her study has relevance today.

For one thing, it explains the American “way” of war. Total and final. The devastation of the Confederacy in the mid-nineteenth century compares equally with the complete obliteration of European and Japanese cities that modern airpower of the twentieth century would produce. Like the missions of advanced B-17 “Flying Fortresses,” it was also deliberate and systematic. Dr. Brady described in chilling detail the devastation of the land wrought by the Civil War:

“Across the South, and in a few places in the North, massive armies collided, leaving trenches and rifle pits gaping like open sores; pits from the explosions of underground mines pock marked the ground, and where thick woods once stood, little but broken trunks and shattered limbs remained. In the most heavily contested areas, the effects of the Civil War were akin to a natural disaster, a comparison often made by those who witnessed its destructive power.”

General Grant, famous for “unconditional surrender,” provided his top Generals, Sherman and Sheridan, carte blanche to wage what we now call “total” war. To Sheridan in western Virginia, he ordered: ” … eat out Virginia clear and clean as far as they go, so that the crows flying over it will have to carry their own provisions with them.” An eyewitness later recorded the result:

“I try to restrain my bitterness at the recollection of the dreadful scenes I witnessed. I rode down the Valley with the advance after Sheridan’s retreating cavalry beneath great columns of smoke which almost shut out the sun by day, and in the red glare of bonfires, which all across that Valley poured out flames and sparks heavenward and cracked mockingly in the night air.”

During his “march” through Georgia, Sherman cabled Grant, ” …when the rich planters of the Oconee and Savanna [rivers] see their fences and corn and hogs and sheep vanish before their eyes they will have something more than a mean opinion of the Yanks.”

William T. Sherman famously later called war as “all hell,” a metaphor he helped create. But the description lasted. Today, it is commonplace to call the country “divided,” often compared to the Civil War itself.

Where’s the hell, in the Mueller Report?