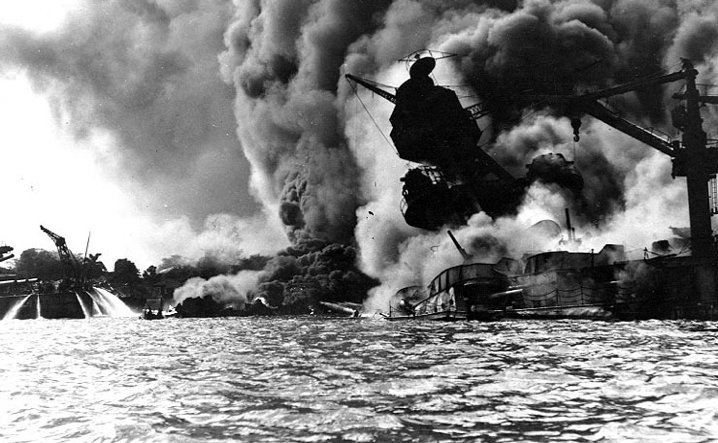 One of the most lasting mysteries in American history remains the Pearl Harbor case, not who did it but who was responsible. The planes were, to be sure, Japanese, but this is not the issue. Who made it possible, or how complicit was President Roosevelt? In a larger context, how complicit was the United States itself?

If this question was raised on December 8, 1941, it would probably be cause for treason. At no other time in U.S. history — before or since — was there so much national unity — a unity that carried throughout the war (only one Member of Congress voted against the declaration of war).

After the war, Congress held hearings to uncover any possibility that Roosevelt deliberately withheld advance intelligence of Japan’s intentions. After years of testimony, the case remains controversial, but FDR is still “innocent until proven guilty.” That case, for sure, is closed.

Beyond that, the larger question remains: what, if any, responsibility does American diplomacy have in the event? During the war, the answer, at least in the public’s eye, was, none. That is perfectly understandable. The vast machinery of the American propaganda arm could not possibly raise even a scintilla of doubt as to who was guilty. National morale is hardly lifted by academic queries.

Undoubtedly, the shock of the sudden attack, seemingly out of the blue, contributed to much of the anger. That, too, is understandable. In his declaration of war, Roosevelt labeled the attack as “unprovoked and dastardly.” The word “dastardly” is uncommon but means “treacherous” or “underhanded.” Fair enough, that’s what an unwelcomed surprise is meant to be. “Unprovoked” is much more difficult, i.e. Japan acted without reason. Do countries attack each other without motive?

Japan wanted to attack the United States in 1941. How is one question, why another. Both are within reason.

How? It was a “surprise.” What on earth else might it be?  Has there ever been an “announced” attack? Would Admiral Yamamoto cable Hawaii, “We’ll be there on the 7th around 8 am, have a nice day”?

Did Jefferson Davis warn Lincoln that Ft. Sumter was about to be attacked on April 12, 1861? Did Hitler tell Stalin that 2 million soldiers were heading his way on June 22, 1941? Did North Korea warn the South that they were crossing the 38th parallel on June 25, 1950? Did the hijackers try to evacuate the World Trade Center before 9/11?

Surprises in war are common and deemed necessary, but never appreciated. Nor are they meant to be.

So Japan did what others have done since time began: they kept their intentions a secret.

This brings up the “why?” Roosevelt felt that Pearl Harbor was “unprovoked.” To his listeners, the American people, that meant one side was 100% guilty, the other 100% innocent. Good for morale but more complicated than that.

Much of the hatred of Japan has roots in what is now called “racism,” a term unknown until recently. Another reason is the notorious behavior of the Japanese army before and during the war. Reports of the “rape” of Nanking, the Bataan Death March, and countless Japanese atrocities throughout the Pacific theater made any appreciation of Japanese national ambitions totally irrelevant.

Yet Japan had needs and ambitions that fit in with other colonial powers, including both European and American. The U.S. declared jurisdiction over the Western Hemisphere in the Monroe Doctrine and intervened over 50 times in Latin America between 1890 and 1927. Japan announced the “Greater East Asia Co-prosperity Sphere” in the late 1930s, albeit with more of a “sword” in hand than a “shield.” European countries had governed most of the rest of the globe for centuries, including most of Asia and China.

The sociological/racial antagonisms between the two peoples hardly helped understanding. In the 1880s, U.S. legislation excluded all Chinese from entering the country, and bans in California extended these to Japanese. In 1907, a “Gentleman’s Agreement” between the two countries governed mutual immigration, but this was ended by the 1924 Act, which prohibited all Asians from entering.

But these were backgrounds. The diplomatic differences between the two over China served as a permanent and unbridgeable wedge that prevented any accommodation and led eventually to Pearl Harbor.

This began in 1899 with the so-called “Open Door” notes to the world from U.S. Secretary of State John Hay (once Lincoln’s personal aide) asking to respect the territorial integrity of China. These notes collided directly with Japan’s ambitions to expand in Asia, beginning with her war with China in 1895. With Taiwan and Korea now Japanese protectorates, the stage was set for a deep and permanent split that finally ended in open war.

With Japan expanding almost everywhere, the U.S. took the defensive. Japan defeated Russia in 1905, and Theodore Roosevelt mediated the peace negotiations, held in Portsmouth, New Hampshire. The Japanese Government and people considered the result an insult and began a national grievance that further separated the two societies.

Japanese incursions in China during World War I were rejected by the Allies after the war. The alliance (1902) between Britain and Japan was also ended then, mostly through U.S. pressure. In the disarmament treaties of 1922 held in Washington, Japan was forced to limit her battleship construction and was prohibited from constructing naval bases in the Pacific. Japan’s occupation of Manchuria (1931) was refused recognition, and any further Japanese expansion was condemned by the U.S. (“Stimson Doctrine”). The U.S. refused recognition when Japan occupied China (again) in 1937 and when she took over Indochina from France in 1940.

Everywhere Japan went, she met American opposition. In July 1941, Roosevelt “froze” all Japanese financial holdings in the U.S. and stopped the export of oil, thus depriving Japan of most of her foreign trade and 80% of her oil.

Japan faced financial ruin and would soon have no petroleum. So she attacked. Yamamoto knew that he couldn’t win but hoped for a quick victory and a free hand in the western Pacific. He was shot down by an Army Air Force fighter in 1943.

Before Pearl Harbor, for decades, Japan was too aggressive, while the U.S. was too defensive. Like ships in the night, they co-existed for years until FDR pulled the plug. Shortly afterward came the “day which will live in infamy.”

America may have had the moral high-ground to protect China, but Hideki Tojo was not impressed. Pearl Harbor was “dastardly,” but hardly “unprovoked.”

It takes two to fight.