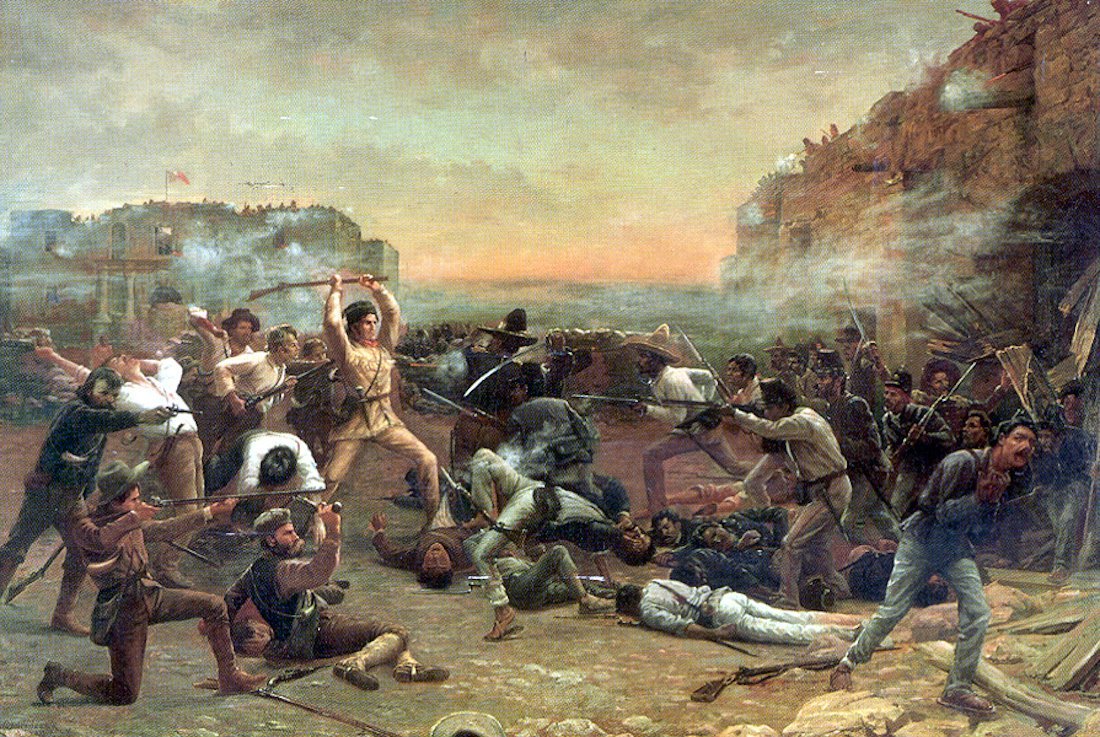 Above: The Fall of the Alamo by Robert Jenkins Onderdonk.

Venezuela is falling apart, the Mexican border is a sieve, Brazil has been in a corruption crisis since 2014, and the U.S. Senate has rejected any “emergency” on the border.

There was once a time when any activity south of the border was some sort of emergency. Take the Alamo in 1836, when 250 Americans, including Davy Crockett, were slaughtered by the Mexican Army. Revenge was swift. A month later, the Mexicans were routed, Santa Anna caught, and Texas proclaimed independence (for nine years).

Almost all of early U.S. foreign policies were on or about Latin America. The first major “Doctrine” on foreign policy, James Monroe (1823), declared the entire hemisphere as under American jurisdiction. Rather bold indeed, considering that the British Army had just burned the Capitol (1814). In reality, however, the British Navy was instrumental in the Monroe Doctrine.

Still, since then, the Western Hemisphere, by stages, became a sort of strategic front-line for the United States. That was meant from the beginning. The Founding Fathers never intended the Revolution to stay inside the country.

The concept of a “New World” was behind the idea of a geopolitical departure from “old” Europe. In The Federalist (# 11) Alexander Hamilton urged Americans “to aim at an ascendant in the system of American affairs … erecting one great American system, superior to the control of all trans-Atlantic force or influence, and able to dictate the terms of the connection between the old and the new world.”  In 1808, Thomas Jefferson supported the independence movements there: “We consider their interests and ours to be the same, and that the object of both must be to exclude all European influence from this hemisphere.”

In 1820, Henry Clay urged the translation of this idea into a separate security system: “It is within our power to create a system of which we shall be the center and in which all South America will act with us … let us become real and true Americans and place ourselves at the head of the American system.”

It did not take long to turn these ideas into reality.  Continental expansion ended basically with the Mexican War (1848), while the “China Trade” was bolstered by Commodore Perry’s “opening” of Japan in 1853 and the establishment of bases in Fiji (1844), Samoa (1856), and the Marshall Islands (1881). The end of the Civil War saw the American “experiment” go overseas. Alaska was purchased in 1867, and, by the 1880s, U.S. interests in the entire hemisphere grew expeditiously. Secretary of State James G. Blaine called the first “International Union of American Republics” in 1890, while the Navy, guided by the writings of Captain Mahan, ascended as a world power.

A minor territorial dispute between England and Venezuela (1896) was settled by U.S. intervention, prompting Secretary of State Richard Olney to declare: “Today the United States is practically sovereign on this continent, and its fiat is law upon the subjects to which it confines its interposition.”

This was a critical departure in world politics, when Britain, in the words of historian Samuel F. Bemis, “…left the New World to the American System, and henceforth she tried to bring the United States … to cast its balance on her side in the world politics of the twentieth century.”

That’s exactly what happened and explains much of what transpired throughout that time period, from world wars to the Cold War.

The rest, as they say, is history.

Gradually, the original defensive nature of the Monroe Doctrine turned from shield to sword. Manifest Destiny controlled a continent; now the Navy would control the seas. By the turn of the twentieth century, the U.S. had engineered two strategic moves aimed at, in Hamilton’s words, “as an ascendant” in the region. In 1898 came the war with Spain, and in 1903 came the independence of Panama from Columbia, arranged from Washington and assisted by the Navy. By 1914, the Panama Canal was completed, the U.S. flag flew over The Philippines, and America found herself as a two-ocean, global power.

Nor was Washington shy about exercising that power. In 1904, Theodore Roosevelt announced his “corollary” to the Monroe Doctrine, giving the U.S. “the exercise of an international police power.”

Between 1890 and 1927, U.S. troops landed on the shores of Latin American countries at least 35 times. Some stayed for days, some for months, years, and sometimes even decades. But Franklin Roosevelt’s “Good Neighbor” policies secured U.S. interests through diplomacy minus the military. During World War II, the U.S. even occupied Iceland and Greenland, thus pushing the Monroe Doctrine into the polar regions.

By war’s end, the U.S. was the strategic master of the entire hemisphere, and the formation of the Organization of American States (OAS) in 1948 reflected that dominance.

The 1962 Cuban missile crisis was ended by John F. Kennedy by invoking U.S. hemispheric doctrines as a potential instrument of nuclear war. “It shall be the policy of this nation,” he told a nationwide TV audience, “to regard any nuclear missile launched from Cuba against any nation in the Western Hemisphere as an attack by the Soviet Union on the United States requiring a full retaliatory response on the Soviet Union.”

The missiles were withdrawn, and the U.S. went on to victory in the Cold War, while Islamic terrorism continues to shift focus away from Latin America. In 2013, Secretary of State John Kerry ended the American system altogether. “The era of the Monroe Doctrine is over,” Kerry told the OAS, and henceforth the U.S. would treat regional countries as “equals.”

This version of President Obama’s “leading from behind” approach would elevate nations such as Haiti, Ecuador, Peru, and Chile, while deflating American power and historic responsibilities.

For the future, U.S. interests might somehow find common ground between Teddy Roosevelt’s “corollary” and Barack Obama’s global “equality.” The U.S. can be both a “good neighbor” and “great again” in foreign policy. It takes vision and interest, and our own “backyard” is the place to start.