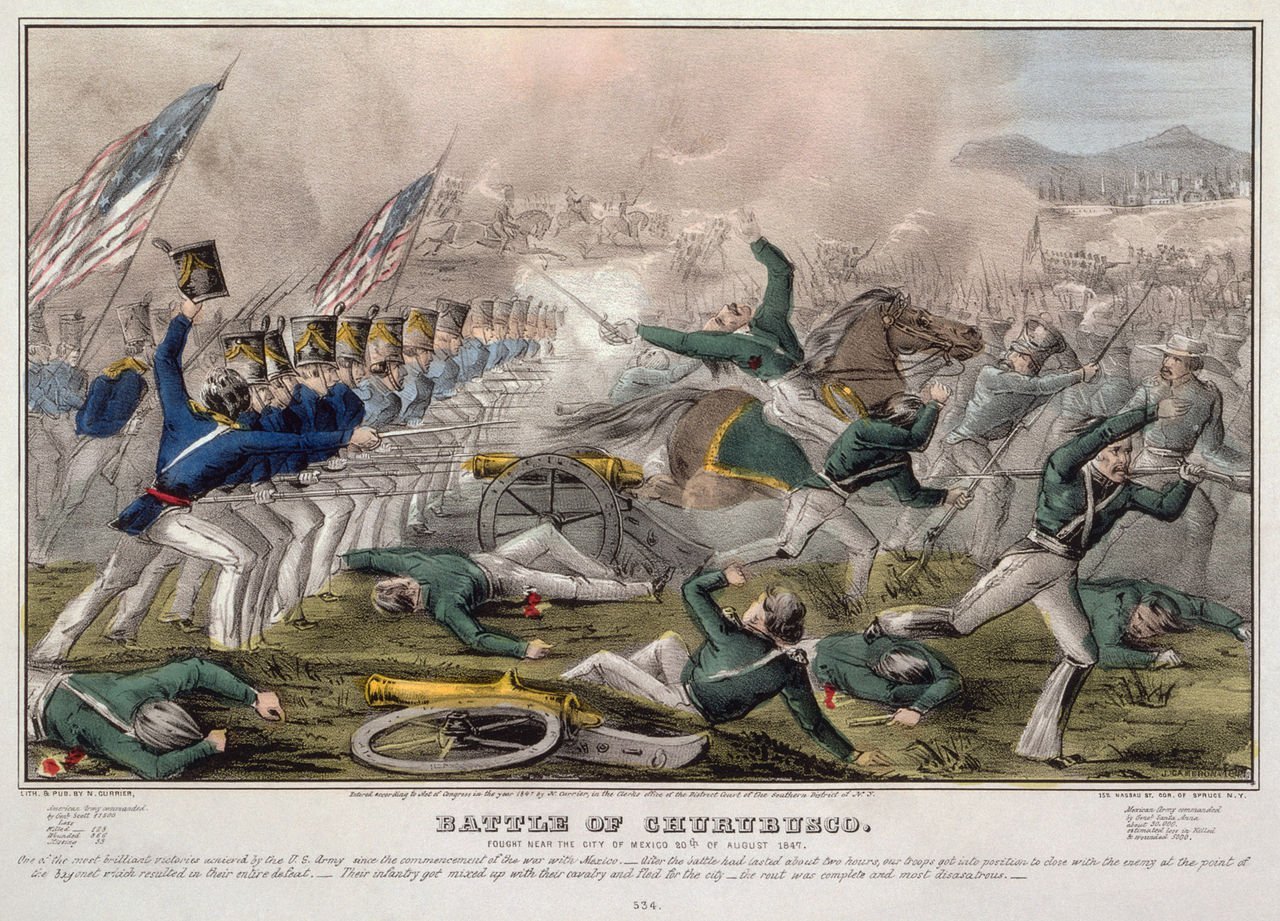 Battle of Churubusco, fought near the city of Mexico, 20th of August 1847, by J. Cameron.

International Relations “theory” includes the idea that “democratic” nations are inherently “peaceful.” The word “democratic” can be defined without too much trouble; “peaceful” is another issue altogether.

On one level, it is fairly easy. Within their jurisdictions, democracies are alone in their capacity to resolve differences between their people. The notion “rule of law” is sacrosanct in the democratic settlement of disputes and can even lead to accusations of a “litigious” society. Better litigious than how most of the world’s one-party states resolve disputes. The Guillotine comes to mind, as a beginning. So does the Gulag and the Gestapo (the “three G’s” theory).

But on an international level, it gets more complex. During the nineteenth century alone, a democratic United States sent military forces into foreign countries on some 100 occasions. That’s one per year. Some stayed for hours, some for days, some for years. Maybe they were justified, maybe necessary, but they were hardly “peaceful.”

Democratic theory posits two separate but related principles. One, democracies do not fight each other; two, they are not aggressive or “militaristic.”

On the first principle: somewhat suspect. In 1812, Britain and the U.S. were among the most advanced democracies in the world. So how does the theory explain that war?

Was the Civil War not fought by two sections of the same democracy? The President of the Confederacy, Jefferson Davis, was also an American, named for the author of the Declaration of Independence. He graduated from West Point, fought in the Mexican War, served as Congressman and Senator from Mississippi and Secretary of War under Franklin Pierce.

In World War II, the U.S. was allied with the Soviet Union, one of the worst totalitarian regimes in history. This was necessary for victory, but democracy had nothing to do with it.

On principle two, can a democracy plan an aggressive war? Again, somewhat suspect. The name James K. Polk is not exactly a household item today. Yet Polk’s presidency, 1845 – 1849, saw the U.S. expand its frontiers throughout the southwest, California, the Rocky Mountain states, and the Pacific northwest. Unique among politicians, Polk kept his promises, and most of them meant force, war and expansion.

This was made plain from his Inaugural Address. While praising American democracy as the “… most admirable and wisest system of well-regulated self-government among men,” he nevertheless urged a policy of limitless expansion. Under the idea of “Manifest Destiny,” Polk brought Texas into the U.S. and promised that “… our system may be safely extended to the utmost bounds of our territorial limits.”

First on the schedule was the Oregon territory that had been in dispute with Great Britain for many years. Calling the U.S. title to the “Oregon Country” (which included Washington State) as “clear and unquestionable,” Polk and the Democratic Party put the U.S. on a war-footing to challenge British claims. Under the slogan “54-40 or fight” (the dividing line) Polk announced that “… the only way to treat John Bull is to look him straight in the eye.” Declaring that he would give Great Britain one year to vacate, Polk pressed the issue until both sides settled on the boundary in the treaty of 1846.

In retrospect, neither side was prepared for or wanted a war over Oregon. Polk’s “diplomacy” has subsequently been called “brinkmanship,” but, in the end, he confronted the world’s democratic superpower over territory they felt was too remote to contest.

The case with Mexico would be much different. Polk wanted to push the country to the Pacific Ocean, but, unlike the Louisiana Territory, it was not for sale. He settled on conquest.

The dividing line between Mexico and the U.S. had been disputed going back to Spain’s colonial rule. The area was sparsely populated, but Mexico resented the annexation of Texas in 1845 and sent soldiers across the Rio Grande. The two sides clashed, resulting in several losses for the American Army. Polk sent General Zachery Taylor and 3,500 soldiers down to the disputed area across the Nueces River, about 150 miles north of the Rio Grande.

After the initial fighting, Polk declared war, and Congress approved it 174-14. The resultant conflict was decided in 1847 with the capture of Mexico City. The peace treaty of Guadalupe-Hidalgo the following year gave 55% of Mexican territory to the U.S., the states of Arizona, New Mexico, California, Nevada, Utah, and parts of Colorado and Wyoming, an area the size of Western Europe.

American continental expansion essentially ended there, while the doctrine of “Manifest Destiny” settled the territorial expanse for the remainder of the century.

James K. Polk was one of the most successful presidents in American history. He promised only one term and stepped down in 1849. He also kept his promise to expand U.S. sovereignty across North America. In doing so, he (unwittingly) contradicted any theory on the passive nature of democracies.

But democracy allows dissent — that is its virtue. Ulysses Grant was an officer in the war but thought it was contrary to democracy. In his Memoirs, Grant confessed that he thought the war “…unjust, an instance of a republic following the bad example of European monarchies.” John Quincy Adams believed that it was “…a most unrighteous war,” while, years later, a Republican Platform Committee called the war “…one of the darkest scenes in our history.”

Protest, typically, also came from the intelligentsia. Henry David Thoreau wrote the pamphlet Civil Disobedience against the war, while Ralph Waldo Emerson wrote that it “…will be as a man who swallowed arsenic, which brings him down in turn.”

In Congress, a Member from out-West challenged Polk, demanding several times exactly what “spot” on American soil did the Mexican Army occupy? He became so insistent that he developed the nickname “spotty.”