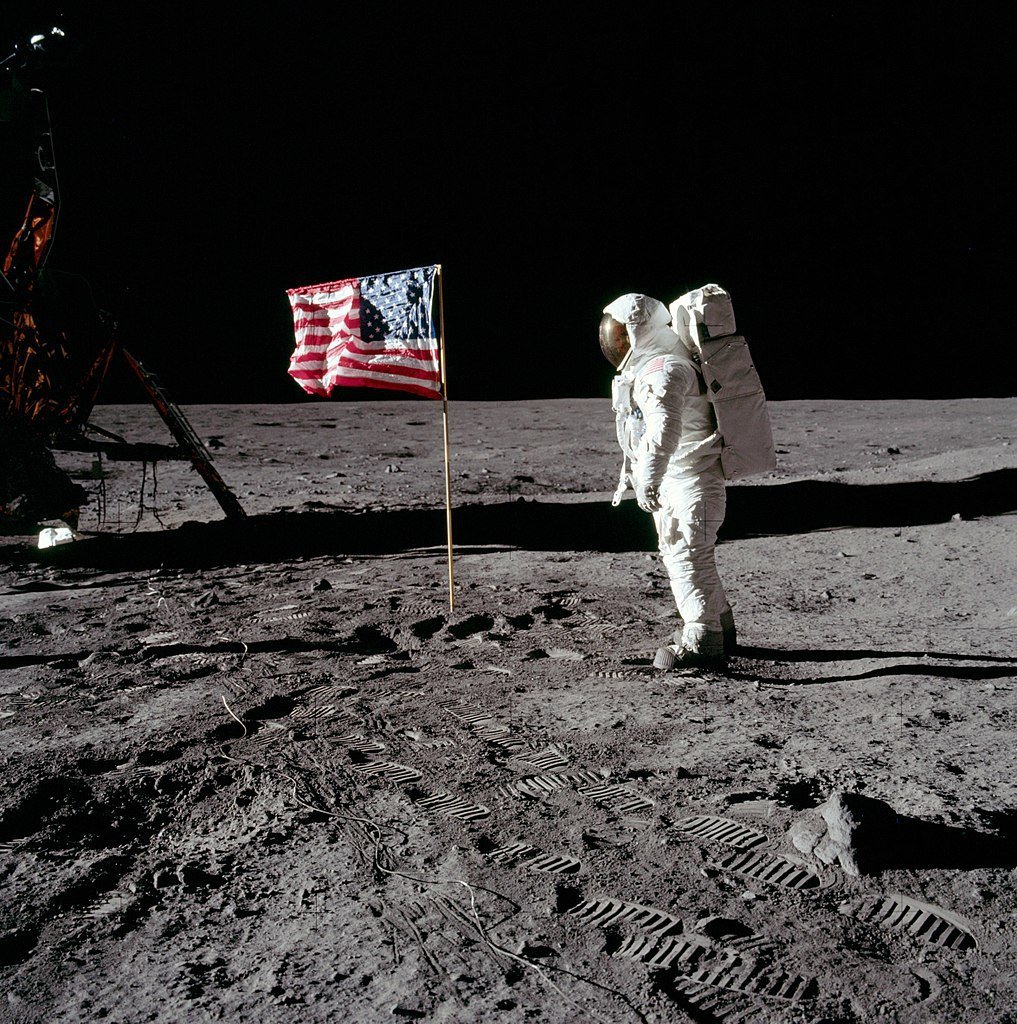 Above: Edwin Aldrin on the moon, July 20, 1969. Photo by Neil Armstrong, courtesy of NASA.

On July 20, 1969, Astronaut Neil Armstrong left Apollo 11, stepped on the surface of the moon, and told the world that he was making history. His first step, he declared, was “one small step for a man, one giant leap for mankind.” But what was the “giant” leap? Was the moon landing a singular event without implication or consequence, or was it a decisive moment in the evolution of “mankind” itself?

Many pundits judge the American Revolution of 1776 as having a meaning that is “too soon to tell.” Translated into history, it bestows even greater significance to the event than its most enthusiastic admirers could know. A “timeless” occurrence, like the Crucifixion, has consequences that go far beyond the capacity of mortal man to digest. Events like that, few in history, take perhaps an eternity to fulfill, if that.

Can the moon landing be in that category? Some say that the fact that it hasn’t been repeated nor expanded since 1972 (there were five more landings/returns since the first) demonstrates that it is of little consequence. Interesting. How many Declarations of Independence have we had? How many Civil Wars? How many Pearl Harbors? How many 9/11’s?

Conversely, the singularity of an event, rather than endless repetition, may well define both its uniqueness and its significance.

A few say that the first landing never occurred, that it was an early example of “fake news.” The only plausible explanation for such a deception is technological impossibility. Thus, it was beyond science to accomplish. The hundreds of rocket launches, returns, orbiting vehicles, satellites, GPS systems in outer space, both before and since, makes this explanation implausible if not impossible. Why hide something you already can do?  It’s equivalent to denying the “Space Age” itself. In any case, the conversation itself is probably irrelevant, since the event is embedded in recorded history.

Yet, there was ample notice that the Space Age was coming.  Prior to 1969, both the Soviet Union and the U.S. had sent a number of unmanned “soft” landings on the moon: the Soviets had four, the U.S. eight. Those were the successes; both had a total of 39 crashed or malfunctioned failures. Since then, there has been a total of 325 global manned space flights launched, with three failures, most famously the Challenger. The Space Shuttle alone has made 135 flights, 198,000 man-hours, 29,000 orbits, and 1,300 man-days.

But July 20, 1969 remains enduring. The picture of American astronauts planting the stars and stripes on the surface of the moon fits in as one of the most decisive and profound images in the annals of mankind — something that every American school-child should have implanted in his or her memory. What is comparable: the signing of the Declaration of Independence, the “rockets’ red glare” over Baltimore Harbor, the dead at Gettysburg, Lindbergh landing in Paris, the USS Arizona at Pearl Harbor, John Kennedy Jr. saluting his father’s coffin, the collapse of the World Trade Center?

Regardless of time and circumstance, an event is measured by its impact upon its own generation and its legacy. The context of the moon landing and its impact on the world, especially in 1969, is the only meaningful standard with which to judge the event. There was no domestic reason, political, cultural, or economic, for the U.S. to attempt a successful landing on the moon at that time. It was conceived by a Democratic administration, executed in a Republican one, and took place in the middle of a protracted and frustrating insurgency war 12,000 miles from home. Landing on the moon could not help the U.S. in Vietnam, nor could it save Richard Nixon’s doomed presidency.

President Kennedy made the purpose of the moon landing clear from the very start. In his Inaugural Address, he called upon Americans to reach high: “…let us explore the stars, conquer the deserts, eradicate disease, tap the ocean depths.” The first of these missions was the moon. Just months into his administration, he told Congress that the top priority was, “…before this decade was out of landing a man on the moon and returning him safely to the earth.” The following year, at Rice University in Houston, he told the world why. Summoning challenges imbedded in the pioneer spirit, he repeated three consecutive times the phrase, “we choose to go to the moon.” Why? Because the challenge of outer space is “…one that we are willing to accept, one we are unwilling to postpone and one which we intend to win.” Invoking history and nature, he rhetorically asked, “…why climb the highest mountain, why thirty-five years ago fly the Atlantic?”

At the time, the U.S. was behind the Soviet Union in space technology. The memory of the first space satellite, Sputnik, in 1957 circling the earth for all to see was still fresh in memory. The Soviet Union was also the first to plant a man-made object on the moon, September, 1959. The alleged “missile gap” that haunted the 1960 election was also a memory, as was the first man in space, cosmonaut Yuri Gagarin on April 12, 1961. If the Cold War was a war for the world, the “space race” was nothing less. And the U.S. was losing.

Yet the first moon landing had significance that defined the end of the Cold War. Kennedy never lived to see his greatest achievement, and the Cold War would end several years later. It is in this context that the “space race” should be judged. The Cold War was won, as they say, “without a shot being fired.” But the “shot” to the moon played a significant, and peaceful, role in that historic endeavor. Like the Strategic Defense Initiative (SDI), a laboratory event rather than a “battle,” the perception of ultimate failure that haunted the Soviet Union played the single most critical role in its eventual demise. This confession comes from the testimony of former Soviet officials, including Mikhail Gorbachev himself.

As the Soviets gradually lost ground in the space race, they had good reason to provoke conspirator theories. As a Pravda journalist once expressed it, “Secrecy was necessary so that no one would overtake us. But later, when they did overtake us, we had to maintain secrecy so that no one knew that we had been overtaken.”

Today, when the Cold War is but a memory, outer space is still there while America debates the Mexican border. Last January, China landed its first spacecraft on the moon. Last year, President Trump announced plans for a new “Space Force.” As we proceed into the new century, how will the picture of July 20, 1969 shape America’s future on earth? Where is another JFK?