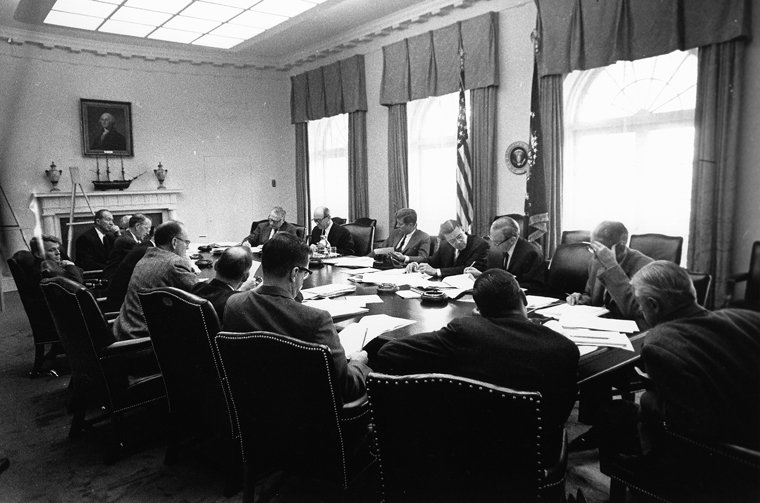 It was October 22, 1962, and President Kennedy would address the nation that night at 7 (EST). I was a new grad student at Penn and had class starting then. There were about 50 of us, seniors and first-year grads, and the class was “International Relations,” taught by Robert Strausz-Hupe and James E. Dougherty. Both had co-authored (with others) Protracted Conflict (1959), a penetrating analysis of Soviet foreign policies (and the reason I was at Penn).

Strausz-Hupe was born in Vienna, founder of the Foreign Policy Research Institute (FPRI, 1955), and an author of classic texts on geopolitics who would become U.S. ambassador to five posts, including NATO and Turkey (1981-89). I attended his funeral in Philadelphia (2002). Dougherty (d. 2012) was at the FPRI and taught Political Philosophy for over a half-century at nearby St. Joseph’s (where my daughter Lauren went). Dougherty, with Robert Pfaltzgraff, then a Penn Professor (later at The Fletcher School at Tufts University) co-authored Contending Theories of International Relations, a text still used by Dr. Lenczowski here at IWP.

During the day, there was great speculation on what Kennedy would address. Many thought that it was on U.S. Steel, where he had had some difficulties. At 7 promptly, Strausz-Hupe placed the small black and white TV on his desk, and we all sat and waited. The President began. “This government, as promised, has maintained the closest surveillance of the Soviet military build-up on the island of Cuba…” Most of us nearly fell out of our chairs. What Cuba, what “promise,” what “build-up”? He then went on to describe in detail just what Premier Nikita Khrushchev had been doing since August. Unbeknownst but to a handful of Soviet and American officials, he had been slowly shipping medium and short-range ballistic missiles (1000 – 4000 miles range) into the island, that the Soviets had co-opted since Castro came to power in 1959. Cuba was, in effect, now a land-based Soviet “aircraft carrier,” 90 miles from Miami. These sites, nine plus four air bases identified by U-2 (not the band) flight photos, could hit northern South America, Chicago, New York, and, of course, Washington itself.

Rationales for the next several days were on everybody’s mind. What was Khrushchev trying to do? Destroy the U.S.? Use Cuba as a bargain to pressure NATO out of Germany? Since the Soviets were far behind in nuclear deployments, was he trying to avoid the northern defensive shields that we had in Canada and Greenland? Or was he just trying to strengthen his position at home?

Speculation was rampant. Normally we went to Smokey Joe’s to meet girls; now all beer-talk was on the “crisis.” Although no one knew it, “back-channel” diplomacy, especially by JFK’s brother Robert, was working feverishly to avoid Armageddon. Cables went back and forth between Kennedy and Khrushchev, who was beginning to feel trapped and threatened by the possibility of an invasion of the island. The U.S. now had a naval blockade (called a “quarantine”) around Cuba, and all shipping was searched for missile paraphernalia.

As tension gripped the nation, the crisis mounted, day-by-day. Kennedy met regularly with his “Executive Committee” (Ex-Com), divided on either side of the table. One side was led by General Curtis Le May, he of World War II fame for the bombings of Germany and Japan. They wanted an invasion, once and for all. On the other was UN Ambassador Adlai Stevenson, who lost twice to IKE. They wanted negotiations, what else? At one point, CIA Deputy Director Ray Cline, a friend of Kennedy’s from Harvard, walked in. He asked, “Mr. President, where should I sit, with the hawks or the doves?” — thus defining the two sides of the Cold War from that point on. (Ray was father-in-law to IWP Professor Roger Fontaine. I attended Ray’s memorial service at Murphy’s Funeral Home, Falls Church, 19 March 1996. When I got home, the phone was ringing. My own father had died that hour.)

The naval blockade and further U-2 flights demonstrated just how serious the crisis was. One flight alone brought back nearly 1,000 photos of various stages of deployments. Soon, the whole island would be ready for action; America was, for the first time in history, literally “under the gun.”

In his speech, Kennedy warned the Soviets that any missile attack from Cuba against “any nation in the Western Hemisphere” would be met by a “full retaliatory response upon the Soviet Union.”  Nuclear war was now a reality.

Secretary of State Dean Rusk later described the final stage when Soviet ships carrying missiles continued closer to Cuba. As the nation watched on TV, the ships kept moving, then they stopped en route. The U.S. blockade was just ahead — what would they do? Suddenly, they made “a U,” and headed back home. The crisis was over! As Rusk described it later, “we were eyeball to eyeball, then someone blinked” (I played rugby for several years with his son, David, who later served as Mayor of Albuquerque).

The crisis ended in late October. The U.S. promised not to invade and removed missiles from Turkey and Italy (which was overdue anyway), and Khrushchev was ousted two years later. He retired to a dacha in the suburbs while his son Sergei became a professor at Brown (quite liberal I hear).

Was this the “most dangerous moment” in history or is this just overkill? Speaking of “overkill,” the nuclear weapons of 1962 were approximately 100 times more powerful than the ones dropped on Japan in 1945. Harvard Professor Graham Allison, who co-authored Essence of Decision on the crisis, speculated that over 200 million Soviet and American citizens would have died within minutes from any nuclear exchange. Had any exchange escalated either to Europe or Asia, figures go as high as one-third of humanity. An invasion scheduled for the third week was quickly cancelled.