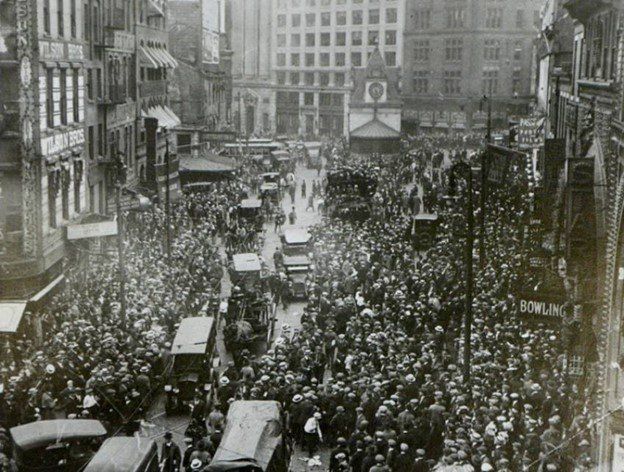 On September 9, 1919, the Boston police force went on strike against what the police union called poor labor and wage conditions. The strike lasted five days and to this day represents the first and only organized police strike in American history. But considering the conditions in cities today, with calls for defunding and elimination of police, the situation in Boston 101 years ago bears another look. The nature of the conditions in Boston then, and the outcome of the strike, may well give us a clue to the dangers and results of what happens when citizens are forced to take the law into their own hands.

Like now, the strike had a political background and a history of left-wing, communist influence in society. Actual conditions for the over- 1,500 Boston officers were miserable even under the standards of 1919. They typically worked 10-hour days, slept in 19 station houses that dated to pre-Civil War, and shared typically four toilets and one bathtub for an average of 135 men. The highest salary was $1,400 a year, equivalent to $23,000 today, and they made half the pay of carpenters and mechanics and less than streetcar conductors.

Despite their conditions, the police were forbidden to organize or strike. But in 1919, the nationwide labor union American Federation of Labor (AFL) began granting charters to police in U.S. cities, including Washington, Miami, Los Angeles, and St. Paul. This was met with protests throughout the country, including Boston’s Police Commissioner, Edwin Curtis, who proclaimed that “it should be apparent to any thinking person” that police “cannot serve two masters,” their own citizens and “an organization existing outside the department.”

Nevertheless, on August 15, the Boston Police joined the AFL; on September 8, they voted 1,134 to 2 to strike, commencing the next day. Of the 1,544 officers, 1,117 (72%) failed to report to work, while Massachusetts Governor Calvin Coolidge promptly hired 100 Park Police to replace them. Most of these, in turn, also failed to appear. Strikebreakers, mostly Harvard students, were recruited that evening, but they too quickly disappeared.

By the night of September 9, widespread rioting and looting began throughout Boston. Rocks were thrown at streetcars, stores were vandalized, fires and false alarms created havoc with the Fire Department. The following day, Governor Coolidge provided 5,000 State Guards to replace the absent police, prompting Commissioner Curtis to proclaim “the universal chorus of commendation that has greeted their work.” The morning papers were in full agreement, calling the police “deserters” and “agents of Lenin.”

Violence peaked the following day. Most businesses stayed up all night to board their stores, women were threatened, and hundreds had their handbags snatched. During the day, the Guards had to “charge” into Scollay Square, cavalry-like, to break up a riot. A total of nine civilians were killed by the Guards, but by the 12th, Boston had settled under their watch.

The next day, Commissioner Curtis fired most of the strikers and hired 1,574 replacements, most unemployed world war veterans. Salaries, vacation time, and work conditions were greatly expanded, while citizens raised $472,000 to help pay the Guards. Still, members of the United Garments Union refused to sew new uniforms for recruits, who initially had to wear civilian clothes. On December 21, the State Guard was relieved, and Boston went back to normal.

That was the last police strike ever to occur in the U.S., but the lessons from Boston shaped subsequent American history.

The single most critical lesson was to beware “foreign,” read “Bolshevik,” influence that was just starting from the 1917 revolution that created the Soviet Union. Labor Unions were often the target, and, throughout the 1920s, thousands of “Bolshevik” unionists and Soviet agents were shipped home by Attorney General A. Mitchell Palmer. This continued almost unchecked through the Great Depression, World War II, and Cold War to include the next wave of “McCarthyism” that pervaded the 1950s.

The immediate aftermath of the Boston strike began this political culture with great enthusiasm. This, ironically, was led, then as now, by a New York Times that might not be too comfortable with its original patriotism. Declaring the Boston strike to be “an essay in Bolshevism,” the Times declared the strike “an imported revolutionary idea that may spread to various cities. There should be a plain and stern law against it. … It ought to be punished suitably and repressed.”

This was nearly a unanimous national view. The Philadelphia Ledger wrote that “Bolshevism in the United States is no longer a specter. Boston in chaos reveals its sinister substance.” President Wilson called the strike “a crime against civilization” that left Boston “at the mercy of an army of thugs.” A Senate Report headline read “Senators Think Effort to Sovietize the Government Is Started,” while Senator Henry Cabot Lodge, Chairman of the Foreign Relations Committee, believed that “we shall be in measurable distance of Soviet government by labor unions.”

The whole affair led to a great rise in prominence for both Massachusetts and its Governor.  The Boston Transcript reported, “Massachusetts is hailed today from Maine to California as the winner of a shining triumph for straight Americanism. The voting booths of the Old Bay State were a battleground for the nation. …the issue was America, and in the triumph of that issue all America triumphs.” Governor Calvin Coolidge was catapulted overnight to national prominence, leading almost immediately to Vice President and President. Not bad for a “silent” conservative from Vermont.

Today’s harbinger from a nation convulsed with anti-police sentiment: mess with the cops if you want, but this could be a hornet’s nest you just might want to let alone.