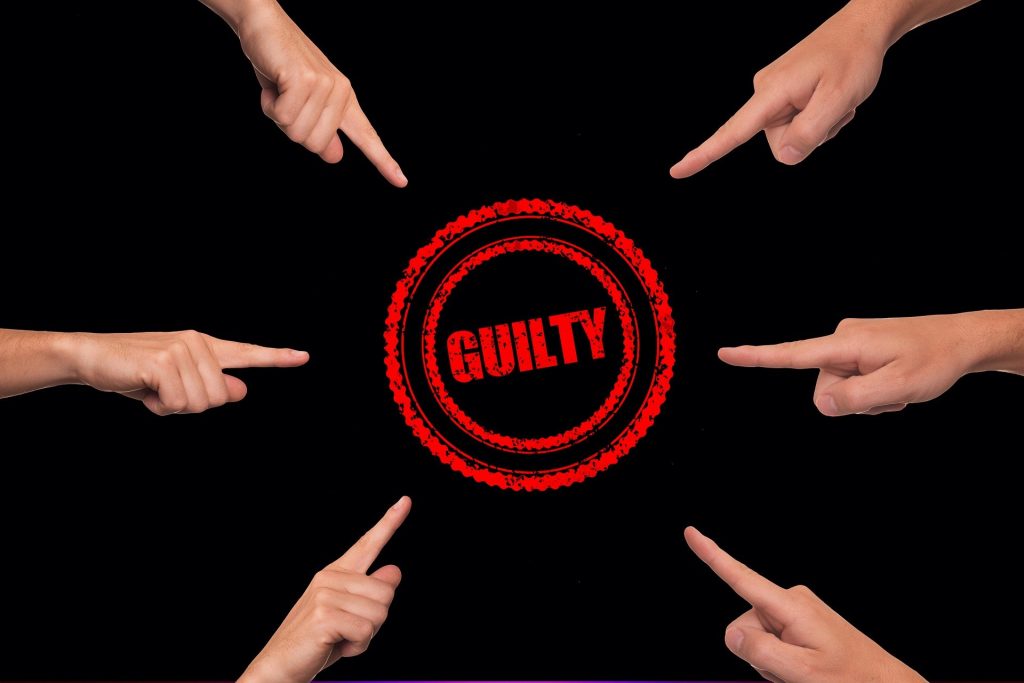 The quality of being “guilty” is a pervasive accusation, whether true or not, that can have a powerful effect on the behavior of anything so charged, be it individuals or nations. The precise definition of the term is “feelings of deserving blame for imagined offensives or from a sense of inadequacy.” Synonyms are “contrition, penitence, regret, remorse, self-reproach, shame.”

Note that the concept does not require accuracy or any particular behavior, meaning that it is a self-applied psychological condition, whether derived from within or without. A serial killer may have absolutely zero guilt; a pickpocket may well become absorbed by it. The charge could be completely baseless or well-deserved.

Either way, the notion of “guilt” is a powerful one, whether accepted or not. There is practically no limitation on its application, and the impact of the notion has defined humanity from Adam and Eve to the infamous “war guilt” clause after World War I, which essentially created both Hitler and the Second World War.

Guilt is also related to religion, from the Crucifixion to the Christian concept of “penance,” to the ultimate theological design between eternal life or death.

The concept has placed an enormous burden on political life as well, be it the politics between members of the same family, state, or nation, or between the  sociologies, religions, races, genders, tribes, and all else that comprise the vast human “family.”

It does not require an enormous imagination to define the current American political “culture” to be nearly dominated by guilt. The key expression is “culture,” particularly by the degree of attention that the idea has been advanced by those social elements that “define” culture.

That may mean that less than one percent of 330 million actually claim guilt, whereas their media, political, and protester elite have succeeded in imposing the notion throughout the “body politic.” This, as well, is not unique to current events, as it has defined the nature and conduct of political behavior from the beginning. No more than twenty percent of original Americans wanted revolution in 1776; there were about twelve Bolsheviks in the years before the 1917 Russian revolution, while Adolph Hitler and around 800 Nazis controlled eighty million Germans in the 1930s. As they say, “that’s politics.”

That’s also “politics” in modern America, where the “guilt complexion” has come to define the country over the past several years. The accumulation of several “isms” (racism, sexism, white nationalism) that have surfaced are sufficient evidence of the growing dominance of national, or “sub”-national, guilt applied almost universally.

Regardless of their merit, even if they are fully justified, they at least share a common and singular denominator: they have imposed a widespread psychosis of guilt upon the concept “America,” and what it has purported to represent. This applies especially to Caucasian males, who have been primarily responsible for all that has comprised the national experience.

As in the theological guilt, the national guilt will likewise require “contrition,” which could mean a total overhaul of the American experience long before the original revolution.  This is already underway, as protest movements stemming from guilt have come to dominate the culture: to change the birthdate from 1776 to 1619, to define slavery as essential to the “experience,” to develop “anti-racism” as a national imperative, to impose “identity” classes on institutional behaviors, to the change in academic curricula from explanatory to apologetic, to the emergence of protest groups as social definers, and to the destruction of historic statues and landmarks that may contradict select ideologies.

This background will not surprise any reader who has been awake since 2016 (or who can read and watch). Yet, what are the consequences/implications of such movements, assuming that they may well prevail?

The first is both apparent and obvious. Any society, individual, or group, cannot possibly advance itself or have goals or ambitions if it is perpetually trying to repent for itself, apologize, or otherwise try to make up for its past sins. These would have come in two phases, of either “commission” or “omission.” If it is commission, it must repent for what has been done; if omission, it must supply what was denied.  In either case, the effort would be monumental, involving a whole reconstruction of society, including its history, social composition, and, indeed, a near-reversal of the values and culture that were guilty from day one.

Typical is the projection of Professor Candace Rondeaux (Arizona State): “If this system remains the same for the next few decades, everything about Americans’ way of life will be on a collision course with political institutions that have been unable to keep pace.”

The second consequence would involve a social movement that might best compare to the wholesale evacuation of populations that were forced out of their homes or had to flee regimes that threatened lifestyles that were considered safe and dependable. From acceptance to rejection, the implications of guilt contain a vast spectrum in between. Many would resist, many would seek safety elsewhere, while others would have to adjust to what, some would say, they “had coming.”

“Revolutions are not tea parties,” has been said to justify actions taken in the name of “progress” throughout history. “Extremism in the name of liberty is no vice” was once a major American political slogan, now applied for “justice” and “equality” as well.

The phenomenon described above is an American reality. It is not a “passing fancy” nor a “mid-life crisis.” It has roots elsewhere, notably in European political doctrine (Marxism, Frankfurt School, Gramsci). It is essentially “collectivist,” socialistic, or communistic and, as in previous movements of that nature, decidedly “totalitarian” in political behavior. Nor is it a revisit of Fascism, which is heightened nationalism and militarism, a doctrine exactly opposite from the present danger. Fascists invade neighbors and do not tolerate opposition; this movement is internal and is the opposition.

The movement is probably in a “beginning” stage. Should it advance to a “middle,” we might well predict what “The End” could be.

In the debate of 9/29, President Trump may have revealed a greater perspective than we all knew: “This is not going to end well.”

What did he have in mind, the evening or the country?