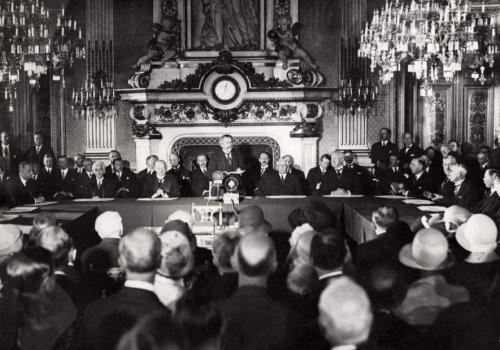 Readers will be forgiven if they have no idea about the subject of this essay. Yet, at one point in time, the “Pact” was signed by 62 countries of the world and most people, especially in the U.S. and France, believed that it would lead to an eventual “peace on earth” based on political liberty.

Kellogg was Francis Kellogg, the American Secretary of State under Calvin Coolidge, and Briand was Aristide Briand, French Prime Minister for eleven governments in the early twentieth century. Kellogg served before as a Republican Senator from Minnesota and, as such, voted for the ratification of the 1919 Treaty of Versailles. Briand, in his long tenure as PM of France, received the 1926 Nobel Peace Prize for the Locarno Treaty bringing Germany into the League of Nations. He also introduced a memorandum into the League in 1929 advocating a “Regime of European Federal Union,” which, in retrospect, was the original forerunner of today’s “European Union.”

The legacy of The Great War (World War I) that took 10 million lives without solving anything was so consuming, especially in France, that countries continued to seek any number of alternatives so that it would never happen again. In April 1927, Briand wrote to the Coolidge Administration for a joint, bilateral treaty outlawing war between the two countries. The U.S. agreed but insisted that it become universal so as not to resemble an “alliance.” The result, called the “Pact of Paris,” came on August 27, 1928, when Germany, France, and the U.S. signed the agreement not to use war to resolve “disputes or conflicts of whatever nature or of whatever origin they may be.”

Within a short time, all major countries in the world signed on, including all three eventual Axis countries and the Soviet Union. The U.S. Senate approved it 85-1. Enacted outside of the League of Nations, the Pact of Paris remains “legal” to this day, with the last member, Barbados, joining in 1971.

Today, the Pact is notable only for what it didn’t do, and it remains as a lasting reminder of the incapacity of “legal-moral” persuasions to control inter-state conflict. Typical was commentator Eric Sevareid’s assessment of the Pact on national television as “a worthless piece of paper.” Historian Ian Kershaw summarized history’s verdict on the Pact as “vacuous,” and that it “was a dead letter from the moment it was signed” (To Hell and Back, p. 181, 2016).

Obviously, the Pact failed in its central (and only) mission, to prevent war. True, but a major question remains: was it the treaty that failed or the enforcement?  For it is also true that, beyond the Pact itself, all other attempts to prevent World War II, including appeasement, isolation, alliances, occupation, reparations, diplomacy, trade, aid, etc., etc., failed equally, if not more so.

Although the legacy of the 1928 Pact remains buried under the demands of, first, the Cold War, and now global anarchy, terrorism, emigration, and intra-state violence, a case can be made that its “burial” as a force for peace, quoting Mark Twain, may be a bit “premature.”

Recent examinations of the Pact give a much broader and more general assessment of its lasting effects. Political Scientists Scott Shapiro and Oona Hathaway conclude that it paved the way for the more familiar  and modern aspects of world politics: “As its effects reverberated across the globe, it reshaped the world map, catalyzed the human rights revolution, enabled the use of economic sanctions… and ignited the explosion of international organizations.” (The Internationalists, 2017, p. xv). Similarly, Julie Bunck and Michael Fowler have noted that “In criminalizing war Kellogg-Briand played a role in the development of a new norm of behavior in international relations, a norm that continues to play a role in our current international order” (Tulane Journal of International Law, 2018).

The main reason for the failure of the Pact was the rise of militaristic nations in the interwar period. Both Germany and Japan were original signatories, but, in the 1930s, economic depression and national Fascism drove both toward military regimes intent on war for expansion and survival. Both walked out of the League of Nations and began a series of military conquests that, by 1942, saw each in control of most of the political globe, save Britain and the Western Hemisphere. Under such circumstances, the western democracies had no choice but to fight back, while the Pact blended into historic oblivion.

Is there a chance for a revival of the Kellogg-Briand Pact?

The legacy is the first hurdle to overcome. The notoriety of the Pact to stop aggression is widespread, and “rule by law” has become a dated anachronism for western statesmanship.

Second, to succeed, any new Pact has to be universal. That means both Russia and China, the only two countries that conceivably could overthrow today’s international order, would need to participate. While both exhibit ambitions and expansionist tendencies, there is no indication (yet) that they might behave in Fascistic or militaristic designs reminiscent of Hitler or Tojo.

Is it worth the gamble for western leaders? Since the end of the Cold War (1991), there have been few, if any, bold and deliberate vehicles presented to make warfare “illegal.” That would be the single and “only” purpose of any new Pact. Not to end rivalry, ambition, expansion, or alliances, but to end warfare as an “instrument of national policy” (original language).

Of course, there is always the possibility that it might not work.

Then again, it might. But the same can be said of war.

What are the odds?

Is there another Aristide Briand somewhere on planet earth?