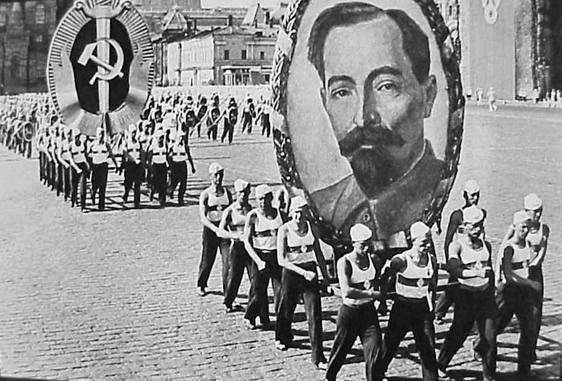 Fanatical, ascetic, dialectical, practical, and love-struck describes best Poland’s most infamous Communist revolutionary and the founder of the Soviet secret police as he emerges from the pages of Robert Blobaum’s Feliks Dzierżyński and the SDKPiL: A Study of the Origins of Polish Communism (New York and Boulder, CO: Columbia University Press and East European Monographs, 1984).  The historian did a yeoman’s work to restore the revolutionary hero to his proper place in the red Pantheon.

Never lapsing into a hagiography, Blobaum remains critical of, if somewhat sympathetic to, his protagonist. Canonized by Communist historiography both in the USSR and Poland, Feliks Dzierżyński (Dzerzhinski) however was not only the unblemished Leninist and spotless and peerless “knight of the revolution.” “Iron Feliks” was his own person and a formidable revolutionary.

Blobaum concentrates on the period before the Bolshevik takeover. He traces Dzierżyński’s origin in a landed noble Catholic Polish family in Lithuania; his patriotic upbringing, in particular by his religiously devout mother; his humiliation by the Russian authorities in high school; his subsequent loss of faith, abandonment of Polish nationalism, and gradual embrace of revolutionary internationalist socialism as well as his quest to bring about utopia on earth through mostly covert operations.

Dzierżyński was neither a party ideologue nor a theoretician. Instead, he was a superb practitioner, organizer, and clandestine operator of the Social Democracy of Poland and Lithuania. Whereas émigré Rosa Luxemburg stood apart as the brain behind the socialist abstractions, Dzierżyński breathed life in them.

Arguably, his greatest contribution was the introduction of the centralized model of leadership. He partly anticipated Lenin, as opposed to following him, on so-called “democratic centralism.” Early on, the SDKPiL leader realized that party discipline and a top-down dictatorship were the best ways to run a utopian organization, which metastasized from a sect into a mass party of 40,000 people during the revolution of 1905. The SDKPiL grew under his tutelage in leaps and bounds only to be destroyed by the Russian secret police, the Okhrana. The ascetic leader paid for his fanaticism with numerous stints in jail and in Siberia, even if he invariably escaped from his frigid exile.

The revolutionary was fiercely independent and protected the independence of his SDKPiL from Lenin. Dzierżyński initially supported the Bolsheviks against the Mensheviks but switched sides when Lenin began interfering in the affairs of his party. His greatest quarrel with the Bolshevik leader concerned Rosa Luxemburg’s theory that Poland’s independence was not viable. Dzierżyński likewise opposed Poland’s independence on principle, while Lenin advanced a deceitful formula of proletarian sovereignty, i.e., a Communist Soviet Poland. The SDKPiL supremo would have none of it. He firmly believed that any concession to Polish nationalism would undermine the proletarian solidarity of a multi-ethnic empire.

The Polish nobleman-turned-socialist also had a falling out with the Marxist Jewish Bund. At first, he considered himself a pupil of the Wilno Bundists, especially the Goldman family. He owed his internationalism to them. But eventually, he grew dissatisfied with them. They remained, well, too Jewish for his taste. Having become alienated utterly from his own background, Dzierżyński wanted everyone to debunk oneself from one’s roots and embrace utopian internationalism. Those Jewish Marxists fell short of the ideal.

Despite the paucity of sources, Blobaum’s take on Dzierżyński’s private life is quite illuminating. The revolutionary was brought up by formidable women, including his mother, aunt, and sister and suffered terribly whenever anything negative afflicted them. The death of his mother Helena was particularly devastating. But so was the untimely demise of his tubercular fiancée, who expired in his arms in Switzerland. Each time he would turn virtually catatonic. There were other times where either an unhappy love affair or other personal problems, for instance, concern for his wife Zofia Muszkat and his little son Jan or for his sister Aldona and her husband, would virtually paralyze “Iron Feliks.”

Eventually, however, his often-tragic personal affairs, along with his frail health, would ultimately propel Dzierżyński to even greater revolutionary exertions. He threw himself into increasingly reckless and exhaustive assignments. He was a true fanatic, and depicting this process of coping with the personal by turning to the public, Blobaum gives us psychohistory at its best.

Regrettably, however, despite all his psychohistorical musings, Blobaum fails to provide us a history of a utopian psycho. Instead, he minces the words and couches Dzierżyński’s means, ways, and aims in progressive jargon. It is obvious that Blobaum likes socialism and sympathizes with its purveyors, including this particular monster. The author clearly considers socialism legitimate, even if he winces a bit, here and there, but not too often at the methods employed to achieve it by the comrades of the SDKPiL, including his protagonist. One cannot quite imagine a biography of Heinrich Himmler that would wax quite that lyrical about the organizational skills of this particular ogre; or over the utopian promise of national socialism and its class/race struggle.

Ultimately, then, the moral failure, and, perhaps, self-deception, of Feliks Dzierżyński and the SDKPiL rests in the author’s refusal to acknowledge that the socialist path the protagonist took inevitably leads to coercion and terror of the utopia of Marx and Lenin. Either socialism or freedom, there is no other option. Dzierżyński marched with his SDKPiL to seize power with the Bolsheviks, which resulted in the establishment of a socialist dictatorship of misery and mountains of skulls. Too bad Blobaum’s Marxist ideological prejudices consistently blind him to that outcome.