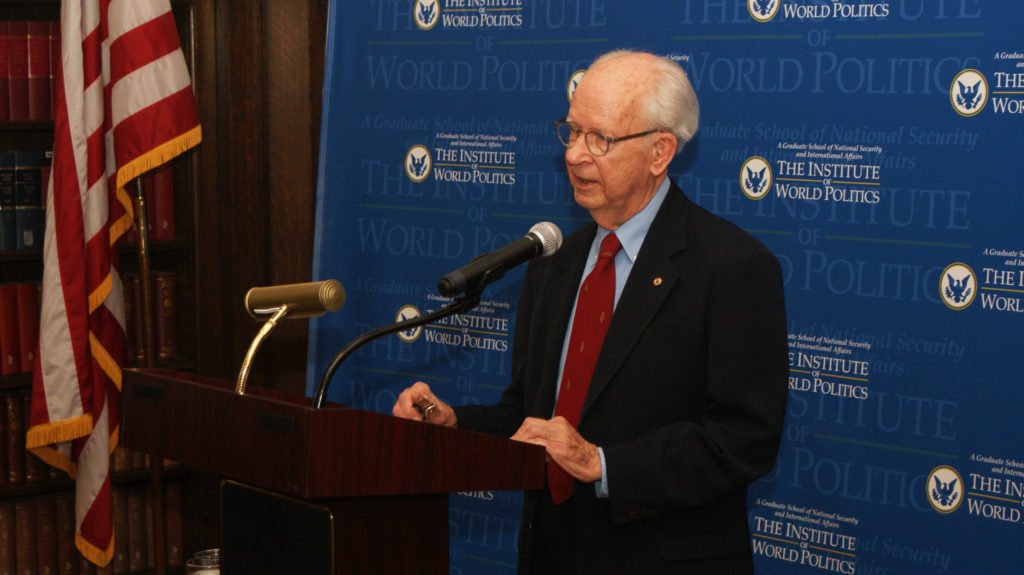 Gene Poteat (1930-2022) was a Southern gentleman, first and foremost. Always dressed with understated elegance, he scrutinized his surroundings with his kind eyes of steel.

Gene was also “Q”. At least, that is how I liked to introduce him. As in James Bond’s “Q,” he served as the chief of new technologies at the CIA.

As with most of his stellar and intense milieu, intelligence was a calling for him. He served a cause greater than himself.

What struck you about his demeanor was Gene’s reflexive discretion. He had superb manners. He did not talk much about anything; he learned the art of exchanging pleasantries with casual effortlessness that was neither forced nor fake.

Not that Gene would become effusive once you were in his confidence. Sure, he’d gently share his pride in his children, including one that was a counterterrorism expert at DOJ; he’d beam in particular about one daughter who was a pilot like himself. Gene truly enjoyed flying and so did his late wife of over five decades.

Of trade secrets, he had many. But he virtually shared none. He was a paragon of discretion. About a CIA operation in Scandinavia in the mid-1970s he told me:

“Intriguing,” I responded, but Gene never shared either why he was in Norway (other than hinting it was an op), nor why President Carter later sought him out.

You don’t kiss and tell.

I remember discussing the traitor Edward Snowden with Gene.

My opinion was (and is) that we should snatch him and put him on trial. We could ask dissident Chechens to deliver him from Moscow to Cracow, but there are no guarantees that he’d survive the warm fuzzies of the Caucasus montagnards before the kind embrace of the FBI.

However, I chose to play the devil’s advocate.

I brought up the libertarian defense. Snowden just wanted freedom and transparency. He wanted to save us from overbearing Uncle Sam.

Gene was not pleased at all: “There are proper channels for whistleblowing.” And I asked: “What if the deadweight bureaucrats close off all possible channels?” Gene responded: “Then you quit on principle. You do not go to the media or try to sell the secrets to a foreign power.

Gene Poteat should know. Some decades ago, “Q” became a whistleblower in a major intelligence cover-up case. He also spoke truth to power then.

This concerned the 1964 USS Maddox case of an alleged attack by the Vietnamese Communists which Gene adjudged to have never happened. The White House refused to accept the verdict and pushed for the Tonkin Gulf resolution which officially escalated the war in Vietnam.

Gene’s last major crusade was the Smolensk Polish presidential plane crash in April 2010. Poland’s head of state, President Lech Kaczyński, perished with his entire entourage on an official trip to Russia.  Our CIA officer agreed with his friend, and fellow IWP professor, Ken deGraffenreid that “the Chekists are guilty until proven innocent.”

Gene mostly operated UTR. Only infrequently would he agree to be interviewed or to write a piece on Smolensk.  That was a departure from his usual style. He was adamant that justice be done, even at the price of the blowing of his cover.

As I said, silence and discretion were his priority, a default of his character. There were very, very few exceptions to this. Once in a blue moon, he would let things slip out, when he wished.

One time, at Langley, Gene Poteat co-organized a commemorative ceremony in honor of Colonel Ryszard Kukliński, who had just passed away in Florida.  Zbigniew Brzeziński dubbed him “the first Polish officer in NATO.”

The Agency wanted to invite the Ambassador of Poland to attend. The diplomat, from the Communist milieu, was stonewalling. So, I wrote a private email to the Polish Foreign Minister to reprimand the fellow. The Embassy complied, and the dignitaries from Poland attended the ceremony.

At Langley, during the function, I turned to Gene and said, “Kukliński must have been the greatest intelligence officer ever. He stole at least 40,000 pages of top-secret Soviet documents.” Another IWP professor, the late General Walter Jajko, told me that the score included the Red Army tank blueprints which allowed us to develop our tank killer technology that was indispensable in destroying Soviet-style armor in both Iraqi wars.

Gene conceded that Kukliński was excellent. But he added impishly: “He was our best spy that the public knows about.”  The implication was, of course, that there were others, even greater penetrations, but it was still hush-hush. And Professor Poteat was not going to talk.

Another time, we were discussing surveillance and dead drops. The latter are secret places and items, usually hollow objects, disguised as rocks, wood, and so forth with hollowed-out interiors. They serve as vessels to communicate or/and deposit spy material (microfilm, etc.) to be picked up later by another spy.

“There can be other uses for those,” he said with a Cheshire cat smile. “I know of stones in a Moscow park that talked to me for many years. As a matter of fact, there were trees in Estonia that did the same. I was even able to check the place out myself after the Baltics regained their independence.”

What Gene was saying was that the surveillance equipment installed by his shop during the Cold War in the USSR continued to work into the 1990s.  This was a great feat of engineering and tradecraft. But do not ask me for details.

Samuel Eugene Poteat (“Gene”) was a CIA scientific intelligence officer and a professor at the Institute of World Politics. He took his graduate degree at IWP and liked it so much that he stayed on to teach, among other things on TECHINT, SIGINT, and women in intelligence, instead of retiring to play golf in Florida. Gene was further recognized with an honorary LLD for his service to our country. He stayed in the game as long as his health allowed him.

Gene Poteat was born and grew up in the Carolinas. He served in the U.S. military during the Second World War in the European theater. Afterwards, he returned home to complete his B.S. in electrical engineering at the Citadel.

At Bell Labs, he worked on missile guidance systems. Then he was recruited by the CIA. His bailiwick included the U-2 spy plane and the Lockheed Martin SR-71 aircraft, for which he designed a cloaking device.

Consequently, the CIA bestowed upon him the Medal of Merit. He was also awarded the Meritorious Civilian Award by the National Reconnaissance Office.

Following his official retirement (and ladies and gentlemen like him never really retired) Gene continued to teach at IWP, presided over the Association of Former Intelligence Officers (AFIO), and served on the board of the International Spy Museum.

A Southern Gentleman, Gene Poteat is now gone, probably dancing and singing before our Lord, his other most favorite hobbies after flying.