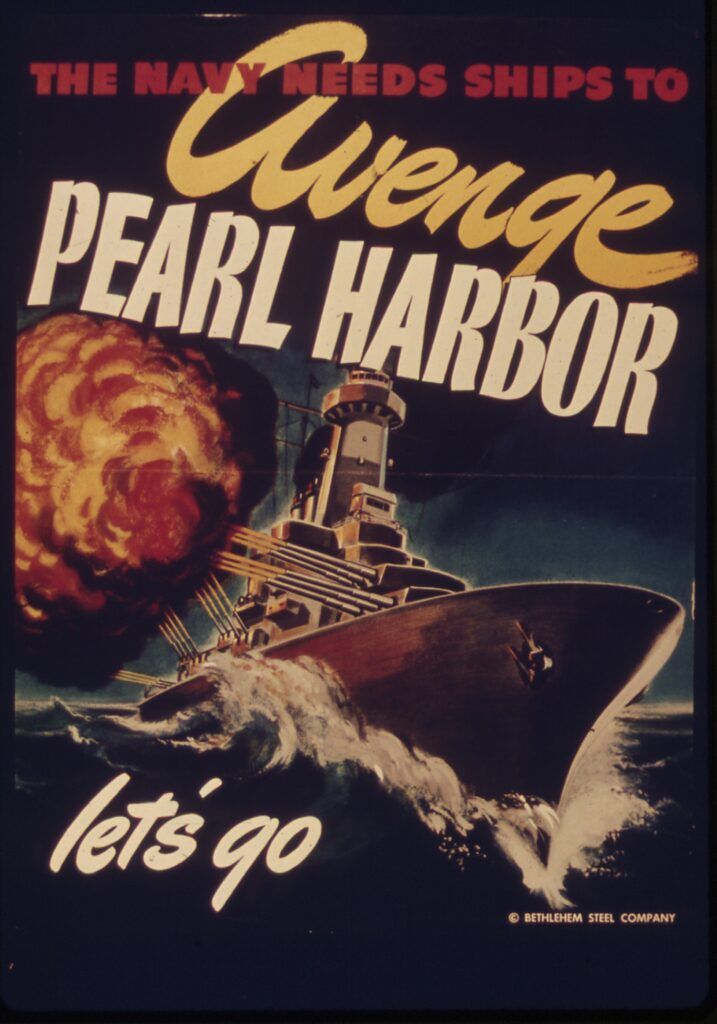 There are two distinguishing traits regarding Americans at war: 1) how Americans have viewed war as a “total” event, allowing for little or no compromise or retreat toward destruction of the enemy, and 2) the lack of foresight and preparation prior to the event.

The war against Japan, from Pearl Harbor to the end, displayed both traits.

The Conduct of War

First, the conduct of war.

From the beginning, Americans have viewed warfare as a total and singular event, with compromise completely ruled out. As military historian Russell Weigley has written, “the strategy of annihilation became characteristic of the American way of war” (The American Way of War, 1973).

In the Revolution, a British Chaplin remarked on this trait in the war between the two sides of Americans, Loyalists vs. Patriots:

“These Americans so soft, pacific, and benevolent by nature, are here transformed into monsters, implacably bloody and ravenous; party rage has kindled the spirit of hatred between them, they attack and rob each other by turns, destroy dwelling houses, or establish themselves by driving out those who had before dispossessed others.”

In the Civil War, General Grant displayed this same approach in his instructions to Sheridan in the Virginia campaign:

“Give the enemy no rest. Do all the damage to railroads and crops you can. Carry off stock of all descriptions, so as to prevent further planting. If the war is to last another year, we want the Shenandoah Valley to remain a barren waste.”

In his campaign against Georgia, General Sherman harbored a similar mindset:

“War is the remedy our enemies have chosen… I say give them all they want; not a word of argument, not a sign of let up, no cave-in till we are whipped or they are.”

Both of these traits (above) characterize the war against Japan, from Pearl Harbor to Hiroshima.

As President Franklin D. Roosevelt expressed it the day after, the attack at Pearl Harbor was “sudden and dastardly.” It was certainly both, but why? Did we expect Admiral Yamamoto to announce, “we arrive around 8 AM on the 7th, have a nice day.” So was the Confederate attack at Fort Sumpter, 1861; so was the German U-boat sinking of U.S. ships in 1917; so was the attack on South Korea, June 25, 1950; so was the Tet Offensive, January 1968; so was 9/11 and global terror; and so was Putin’s invasion of Ukraine last February.

Is there a pattern here?

If the truth be known, practically all of American major wars have begun in the same way, “sudden and dastardly.” Perhaps the two exceptions occurred in the mid and late nineteenth century, under “Manifest Destiny,” in our own “backyard,” against Mexico and Spain when, from the outset, there was no doubt of the result.

But as Teddy Roosevelt put it, these were both “splendid little wars.” Not so the others.

In 1916, President Woodrow Wilson won re-election on the slogan “he kept us out of war,” as the whole country was wrapped up in an isolationist impulse begun with Washington’s Farewell Address (1796). Five months after the election (April 6, 1917), Wilson declared war on Germany, with 56 dissenters in the combined Congress. Nor was the country anywhere near ready for combat 3,000 miles away against an enemy that had been at war for over two years.

The United States had managed to remain aloof from the European arms race that preceded the war. In 1917, the American Army numbered around 100,000, less than Bulgaria. The war was widely unpopular inside the country, especially with both German and Irish Americans. While European Generals commanded fronts of hundreds of miles, U.S. Generals were confined to barracks. The U.S. Navy’s singular objective was the Panama Canal, and U.S. aviators were forced to fly planes made in France. The bulk of U.S. “Doughboys” only participated in the last six months of fighting, but that was enough for the November 1918 Armistice.

It took a while, but America, once in the war, finally finished it.

The Case of Pearl Harbor

This history repeats in the years before Pearl Harbor.

Revulsion against the results of the First War, the Versailles Treaty, and U.S. rejection of the League of Nations led to an even deeper isolationism than in 1917. Characteristic of the time was President Roosevelt’s promise, a year before Pearl Harbor, that:

“I have said this before, but I shall say it again and again; your boys are not going to be sent into any foreign wars.”

In 1940, the American Army numbered 180,000, less than either Belgium or Portugal. Roosevelt made ad hoc steps to involve the U.S. against Hitler and Japan (Lend Lease), but Congress and the public were deeply isolationist. Four Neutrality Laws were passed by 1939, against any repetition of 1917, assuming all sides were bad, prohibiting any trade or supply to belligerents and any arming of American merchant ships.

The “die,” it seemed, had been cast against any further U.S. involvement in foreign wars. In July 1941, Roosevelt cut off further U.S. oil supplies to Japan, thus depriving them of 80% of their fuel. The result, predicted but still uncertain, was war. That it occurred on December 7 was an intelligence failure; that it occurred at all was a failure in strategic planning and political culture. Four days later, both Hitler and Mussolini declared war on the U.S.

Within four days. the U.S. went from isolation to global “superpower,” with little of either the direct result of advance American planning. As before, the country had “stumbled” into history’s greatest wars.

What might be necessary is “instruction” in strategy, diplomacy, national interest, and foreign cultures. The Institute of World Politics, Washington, D.C., might be a good place to start.

The Institute of World Politics is a graduate school of national security, intelligence, and international affairs, dedicated to developing leaders with a sound understanding of international realities and the ethical conduct of statecraft, based on knowledge and appreciation of the founding principles of the American political economy and the Western moral tradition.