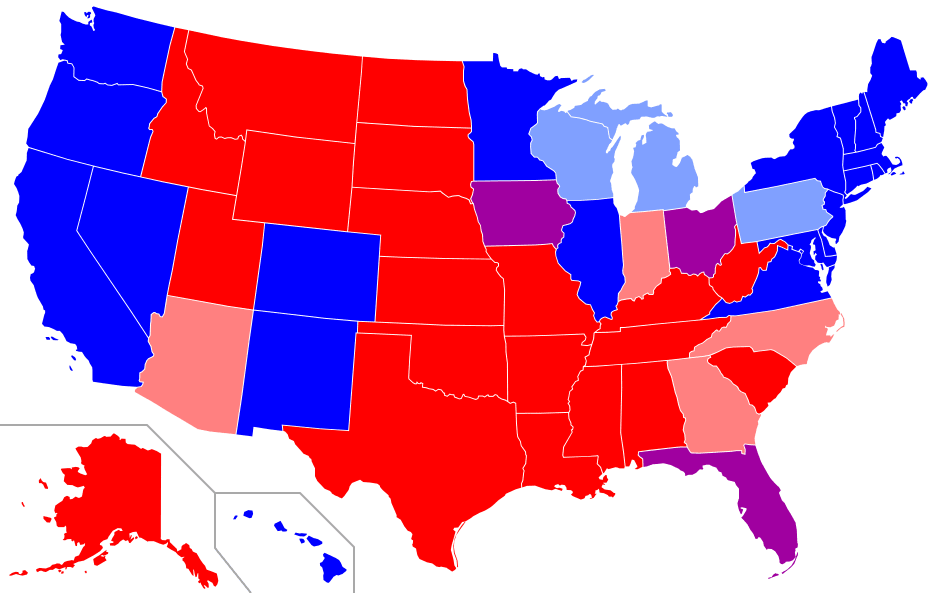 Please note that the views expressed by our faculty members do not necessarily reflect the views of The Institute of World Politics.

The title herein was once a widely-used slogan throughout the political globe to distinguish those who might rather live under Communism than die fighting it. While the phrase itself is outdated it shows, in retrospect, how “colors” themselves can serve as political showcases that hide enormous stakes in the way in which humans choose to exist.

Today in America, the very word “color” has served to dominate the political/cultural discourse, while simultaneously reflecting the dominant sociological definition used in the country today: “racism.” “People of Color,” “Black Lives,” “White Privilege,” etc. might serve to demonstrate the American social landscape as the title of this essay once defined how people saw the political globe.

The colors “red-blue” serve in the current political climate to identify the distinctions between Republican vs. Democratic voting blocs. Briefly, Red identifies approximately the 20 states in the middle of the country that have habitually voted Republican. Conversely, Blue identifies the approximately 19 others, east and west of the middle (but with both New Mexico and Colorado), and on both coasts, that have voted Democratic. “Mixed” others are labeled Purple. Historically, the red-blue divide represents today’s “civil” conflict in a similar way to which “blue-gray” represented each side in the great Civil War itself.

Colors identify a number of other cultural distinctions as well, as in Green for the environmental movement, Yellow for the old Chinese “peril,” Black for anarchy, Orange for Protestant, Golden for eras, Pink for Feminism, and Rainbow for the LGBT movement. To paraphrase the famous baseball slogan, “you can’t tell the players without a ‘color-card.’”

Yet the colors themselves only represent something. Beneath the several symbols lie powerful and durable human, political, social, and economic distinctions, like nationalism, that in the end represent things that people will “die for.”

For the moment, what does Red symbolize in today’s America? In his recent book, The Good Country: A History of the American Midwest, Jon Lauck has outlined the several features that, now and before, have served to distinguish the Midwest (Red) from the Blue and coastal areas. In some ways, these features represent the relatively “rural” vs. “urban” characteristics that separate the farm vs. the city aspects of the “human personality.” Most fascinating, they seem to characterize both sections even today as much as before, despite the technological and cultural innovations that society has witnessed.

Whereas it is “fashionable” for elites from either coast to refer to the Midwest as “flyover” country, this belies the characteristics of the region as being “more American than America itself.” As Lauck points out, the area is actually more “central” to traditional American values than either coastal region. This is particularly true in the areas of public education, racial and religious tolerance, and democratic politics.

These features were present from the very beginning. The Northwest Ordinance (1787) established the land west of the Great Lakes separate from the original colonies. The ordinance guaranteed freedom of religion, outlawed slavery, and encouraged public education because “religion, morality and knowledge were necessary to good government and the happiness of mankind.” Religious colleges, especially Catholic, were established, alcohol and tobacco were frequently outlawed, and private schools such as Oberlin and Hillsdale still operate based upon original political values.

As Lauck has written,

As Lauck has argued, the Midwest had a larger share of what is promoted now as American social values (“inclusion, diversity, equity”) from the beginning – values the media and Left-wing “progressives” are promoting today as “revolutionary.” In point of fact, the Red states are more the heirs of that first revolution than contemporary radicals in Congress, the media, and the public school system even pretend.

In many areas of public policy, Red states have prevailed, despite generations of legislative and judicial dominance from Democrats and the Left. The recent Supreme Court decision on ending abortion as a human “right” is only one example. In areas of civil rights, the environment, immigration, gun ownership, etc., Red initiatives (and reactions) have led the path toward stability and sanity. Blue states are vulnerable to the decay of urban “blight,” hordes of immigration waves, crime, poverty, and civil unrest. By contrast, Red states largely, and by geopolitical definition, remain “bastions” of progress and prosperity.

Recently, Ronald Brownstein of CNN labeled the “surge” of Red-State initiatives as a political and cultural “offensive”:

“To a degree unimaginable even a decade ago this broad offensive increasingly looks like an effort to define a nation within a nation; one operating with a set of policies and rules that diverge from the rest of America than in almost any previous era.”

This trend promises only to grow. If, in the future, America evolves into two parts, I know what part I want to be in.