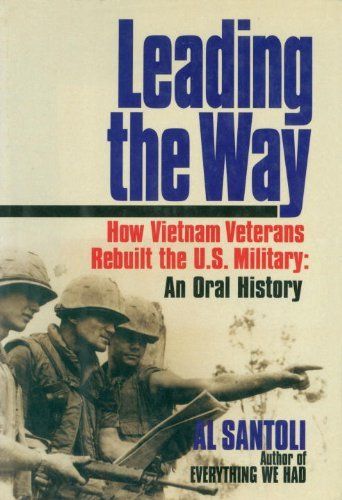 Santoli (Everything We Had) traveled to military bases and headquarters around the country interviewing career personnel who served during the troubled Vietnam years and the postwar period when morale plummeted in all branches of the service. The first half of the book makes for disturbing reading as veterans recall the racial tensions, drug abuse and antiauthoritarianism that crippled the spirit of the U.S. military establishment in the ’60s and ’70s; but the second half, dealing with the mechanics of reenergizing the forces and the successful operations in Grenada, Panama and the Persian Gulf, is upbeat. Participants in this oral history that will primarily interest advocates of maintaining a strong military include the present Chairman of the Joint Chiefs of Staff, Gen. Colin Powell; the former commandant of the Marine Corps, Al Gray; Navy SEAL commander Timothy Holden; Colonel Barbara Smith, chief nurse of Central Command; and Marine tanker Gunnery Sergeant James Graham.

The observations of 56 military leaders from sergeants to the Chairman of the Joint Chiefs of Staff comprise the raw material for an understanding of how the Vietnam experience has radically changed the current state of our military. Compiled by Santoli ( Everything We Had , LJ 4/15/81), they tell us how the echoes of Vietnam made the operations in Grenada, Panama, and, finally (in a sizable section of vivid recollections), the Gulf War so clearly effective. These perceptive observations produce a look into the modern U.S. military’s adaptable and result-driven philosophy, which is a couple of decades late in coming. This book is good both for its insight into current thinking in the command sector and for its descriptions of what the Gulf War was like, in the air and on the ground. Recommended for public libraries.

Please click here to order this book on Amazon kindle.