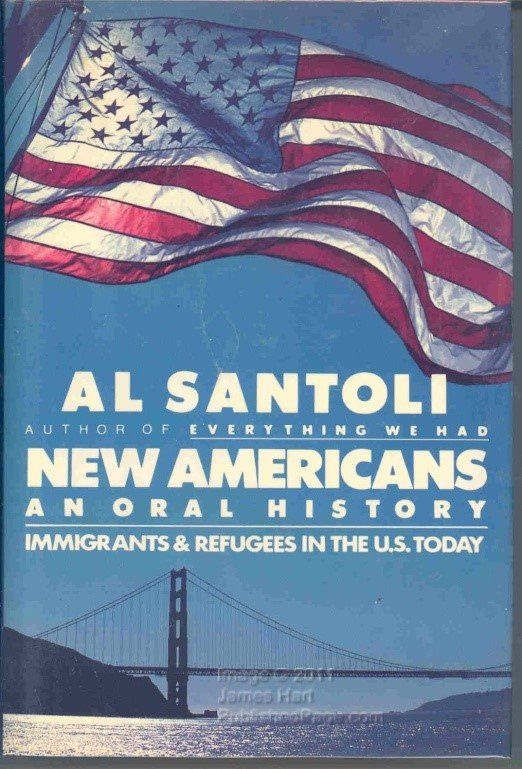 Below is an excerpt from a New York Times review of New Americans.

Some of Al Santoli’s new Americans have been to hell and back before making it to the promised land. Celia Vann Noup, who now owns a four-table doughnut shop by a freeway entrance near the Los Angeles International Airport, crawled through the killing fields of Cambodia with a dying baby in her arms. The Ramirez children from Guatemala, who speak only their Kanjobal Indian dialect, have watched army helicopters gun down their playmates. Tesfai and Lem Lem Gebremariam from Eritrea Province, Ethiopia, were once human skeletons in a sea of human skeletons in the refugee camps of Sudan. Jozef Patyna, a former Solidarity labor organizer in Poland, was beaten and electroshocked by the police. Shoua Vang, a Hmong tribesman, was lowered on a rope from a helicopter to pluck dead and wounded American aviators from the Laotian jungles.

In America they are remaking themselves. It is a heroic task. Shoua Vang is a community organizer and the leader of a cooperative farm for 10 Hmong families trying to make a living in the Minnesota countryside, where they make animal sacrifices for the health of their crops, but also use fertilizers and tractors. The Hmong, like the Guatemalan families, have come directly from prehistory into electric America with little to prepare them for the shock. For all that, they have an immense pride and a daunting faith in the future. They are fiercely determined to make a better life for their children. The word ”education” rings magically through all their accounts.

Not all the new Americans in this fascinating oral history have come so far and through so much. Manyia Barredo, born in Manila, is now the prima ballerina of the Atlanta Ballet but she was also a child television star in Manila. Cha Ok Kim, of Kwangju, South Korea, owns a million-dollar import-export business in New York City. He came to this country with a master’s degree in international relations. And Kathryn Court, the British-born senior executive editor of Viking Penguin, the publisher of Mr. Santoli’s book, appears in one of the few self-congratulatory episodes.

It is an important story: by the middle of the next century, Americans of European ancestry will be a minority. In 1985, only 11 percent of legal immigrants were from Europe. The rest came from the Philippines, Korea, India, the Dominican Republic, Cuba, Jamaica, Iran and Taiwan. The new arrivals have revitalized decaying downtown neighborhoods, have created new cultural institutions and are making a difference in almost every area of social, political and economic life. Contrary to what the doomsayers tell us, these immigrants are doing their best not to be a burden on our social services. They are eager to work, they will do the jobs Americans won’t do anymore, and are passionately involved in the education of their children. They are, for the most part, optimistic, determined and have a strong sense of family. Their great losses are not passed on to their children, who adapt quickly and become more American than Americans.

Please click here to order this book on Amazon.