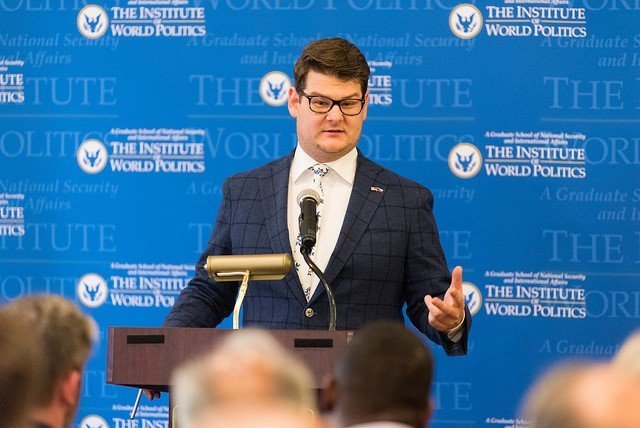 Above: Daniel Bagge, the Czech Cyber Attaché to the U.S. and Canada, speaks at IWP Cyber Embassy Night.
Photograph by Katie Persons Lewis

In late March of 2019, dozens of senior diplomats and officials of the United States (U.S.) and her closest allies assembled under the roof of the Marlatt Mansion for the 3rd Cyber Embassy Night (CEN). The CEN series, hosted by The Institute of World Politics (IWP), brings a small but growing community of cyber diplomats together to discuss the state of the field as well as to collaborate on international solutions. This particular gathering featured a talk by Daniel Bagge, the Czech Cyber Attaché to the U.S. and Canada.

Dean Lane (Senior Vice President for Cyber Intelligence at IWP) and Joe Billingsley (Advisor and Instructor for the IWP Cyber Intelligence Initiative) introduced the speaker and welcomed the guests, who were mostly diplomats but also included a sprinkling of government officials and academics. Before breaking for questions and a reception, Mr. Bagge discussed topics such as the content of his new book (Unmasking Maskirovka: Russia’s Cyber Influence Operations) and the effects of his nation’s recent public warnings concerning Chinese companies.

The heart of Mr. Bagge’s discussion was dedicated to the warning issued by the Czech National Cyber and Information Security Agency (NCISA) regarding security risks of products from two Chinese companies, Huawei and ZTE. He discussed the reasoning of the warning, including conducting a risk analysis, the impact it had on the international stage, and the political aftereffect. He made it clear the warning was pro-Czech and pro-security and not anti-China or anti-trade. The questions that followed led the discussion to practical security measures that other nations can follow and implement. He explained technical and non-technical exercises used to fill the gap between technical resources and policy makers. Mr. Bagge also informed the audience of upcoming efforts to address shared security challenges.

In addition to leading this series, the IWP Cyber Intelligence Initiative offers courses that teach students about the intersection between cyberspace and topics including intelligence, strategy, and terrorism. More information on the initiative can be found here.

Mr. Bagge is based in Washington, D.C. at the Embassy of the Czech Republic. He currently works for the Czech NCISA. Previously, he served as Director of Cyber Security Policies at NCISA. He co-authored and helped implement the Czech National Cyber Security Strategy, as well as establishing Strategic Information and Analysis, Education and Exercise, International Organizations and Law, National Strategies and Policies and the Critical Infrastructure Protection units within the Czech National Cyber Security Center. His experience has enabled him to provide expertise to NATO, USCYBERCOM, USAFRICOM, the U.S. Congress, as well as military and national security entities in Ukraine, the Balkans, and other states.

Earlier this year, Mr. Bagge published Unmasking Maskirova: Russia’s Cyber Influence Operations. In this book, he explores the topic of Russian cyber warfare capabilities, the thought process of its military leaders, and possible long-term goals of Russia’s cyber campaigns. It highlights the importance of cyberspace operations, why such activities are successful, and how these operations affect conventional and digital statecraft.