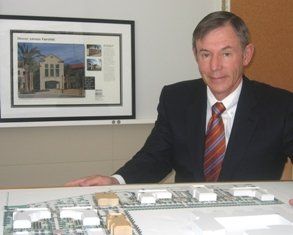 The Institute of World Politics is incredibly fortunate to have a friend, benefactor, and member of its board in Mr. John Lovewell, of Palo Alto, California.  Mr. Lovewell graduated from the University of California at Berkeley and served in the Navy during the Vietnam War.  He obtained an MBA at San Francisco State University at night while beginning his business career, primarily in commercial and mortgage banking. In 1982, he began a new career in Silicon Valley as a commercial property developer.  His projects have included facilities for tenants such as Xerox, Lockheed, Hewlett Packard, a wide variety of high tech emerging companies, and a large campus for Netscape (now AOL).  Today The Lovewell Company is affiliated with the Keenan Group, a California diversified developer of office, retail, hotel, and residential land projects.

Mr. Lovewell also currently serves on the advisory board of Job Train, an organization that seeks to train some of the most unemployable people in various trades, thereby enabling them to obtain and hold jobs.  He is also on the board of the Christian International Scholarship Foundation, which brings Christian leaders from around the world to study at U.S. seminaries, earn doctorates, and then return to their home countries to begin their own seminaries and other organizations.  Mr. Lovewell supports the Hoover Institution as well.

Mr. Lovewell became interested in IWP upon meeting its founder, Dr. John Lenczowski, in California nine years ago: “I was attracted to the mission of the Institute by John’s comprehensive vision of statecraft as crucial to national security. And the intellectual foundation, based on traditional values of Western civilization, has great appeal to me.”

He found that he shared many fundamental values with IWP, and observes that “there are certain basic truths and values that do not change, and the Institute is a lonely outpost in trying [to instill them in its students].”  He was “intrigued by [Dr. Lenczowski’s] emphasis on the study of history, Western civilization, and the founding fathers,” and believes that “the Institute is doing a fantastic job of promoting these values and reacquainting the students with the history of our country.”

Along with sharing many of IWP’s core principles, Mr. Lovewell is a strong supporter of the Institute mission to “[promote] our security and the notion of statecraft.”  He loves the idea that “our diplomats and military leaders and political leaders should be well acquainted with statecraft and all its aspects.”

Over the years, Mr. Lovewell has made many significant financial contributions to the Institute, and he has also donated a lot of his time in his service on the Board of Trustees.  He is one of IWP’s dearest friends.