Above: Karen Armstrong, left, with Jackie Wieland and Sharon Schlosser, who have helped organize events for IWP in Greensboro, North Carolina.

“If you are going to work this long and not be home for dinner, maybe you should consider getting a real job.”

These were the words of Karen Armstrong’s husband Tom, who has been extremely supportive through an array of Karen’s volunteer activities. Karen was raised knowing “that you should give of your time and talent.” Indeed, given the opportunity, Karen has given much of her time and talent: the amount of work she puts into her community is dizzying.

A mechanical engineer by education, Karen has used organizational skills that she honed during her engineering days and has applied them to her work with nonprofits. “In engineering, the bulk of the work is problem solving in a methodical fashion,” commented Karen. “I found that problem solving process sometimes lacking in nonprofits. There is not always a lot of attention to detail. The organization’s employees are working to further the mission, but the mechanics of making things happen efficiently sometimes need help. That is where I hope that, as a volunteer, I can bring my skills, especially to the development office.”

Karen often helps nonprofits with fundraising and planning events. “I hope that I have contributed more efficient ways for nonprofits to reach more people and raise more money without the organization spending its own dollars to make this happen.”

IWP is fortunate that quite a few of Karen’s efforts have been directed towards helping our school.

After being introduced to the Institute by her longtime friend and fellow mother of twins Amb. Aldona Wos (an IWP Trustee), Karen almost immediately became involved with organizing IWP events in Greensboro.

“After hearing Dr. Lenczowski speak at our first luncheon in Greensboro, I was hooked,” said Karen, who gave her first gift to IWP in honor of Amb. Wos. “It has been an honor to support the school for the past eleven years.”

Since then, Karen, Aldona, and several of their friends have orchestrated quite a few special events for the Institute in Greensboro.

Karen commented: “The goal has been to expose as many people as possible to world class lectures in Greensboro, NC.  Since we are not a major city, the opportunity to hear internationally acclaimed speakers on Affairs of State is unusual. To include as many people as possible, the events were designed to be friend-raisers not fundraisers. The goal was to price the luncheon between $25-$35.  We did have sponsorship levels which allowed us to fully fund the event and still make a donation to the Institute post-event.”

As a part of the committee to organize these events, Karen would make calls and send emails to encourage guests to attend.

“We had an ambitious goal of getting 800 people — mostly women — to one of our luncheons,” remembers Karen.

Karen’s committee surpassed this goal. On April 29, 2016, over 800 guests met at the Grandover Resort in Greensboro to hear about pressing security issues from IWP President Dr. John Lenczowski and then-Chancellor and former Director of Central Intelligence Amb. R. James Woolsey. Attendees included a table sponsored by Karen of students and faculty from the Oakridge Military Academy.

“These events are not designed to be a lot of work for IWP: we do the bulk of the work so that the development office can maximize its efforts by working with major donors,” said Karen.

The most recent event in Greensboro took place this past May and featured a discussion on “Russian and Chinese Information Warfare.”

Karen has been helping with these events since 2007. We asked her what inspired her to stay involved for so many years. She answered:

“It is all about education. The opportunity for me to learn, for others in my community to learn, and, most importantly, the opportunity to ensure the school can continue its mission ‘to deepen understanding of all instruments of statecraft, so that their effective integrated use can defend national interests and minimize the need to use force.'”

“These events are a tremendous opportunity to learn. I love attending them,” said Karen. “It is fascinating to hear the quality of student and faculty speakers. The dinner at the Willard is always lovely. I already have it on my calendar for October 2019 because I don’t want to miss it.”

IWP is truly grateful to Karen and Tom for their financial support, and to Karen for all the work that she has done to spread the word about our school in Greensboro.

Karen Armstrong received her BS in Mechanical Engineering from Virginia Tech in 1987 and has worked for ABCO Automation, Procter & Gamble, and Arrow International.  She is currently a community volunteer having retired many years ago to stay home with her twin sons, Michael and William. The twins attended two different high schools, Woodberry Forest School in Virginia and Greensboro Day School.  Both boys attended SMU in Dallas, TX for their undergraduate degrees.  William completed his Master’s in Business Analytics at SMU in May 2018 and Michael graduated with his MBA from Central Michigan University in December 2018 and played football at both SMU and CMU.  Karen currently serves on the Board of Advisors for the Duke Cancer Institute, the Board of Directors for the Excellence Foundation for the University of North Carolina at Greensboro, and the Board of Advisors for the School of Education at the University of North Carolina at Greensboro.  She completed her 4 year term this past June on the North Carolina Council on Developmental Disabilities (an appointment made by Governor Pat McCrory in 2015).  She is a former Board Member of: Habitat for Humanity of Greater Greensboro, the Greensboro Guild of Family Service, the Board of Visitors for the University of North Carolina at Greensboro, and the Family Service of Greensboro Foundation.  She served 3 years on the Steering Committee for the Make-A-Wish Kentucky Derby Classic in Greensboro and has volunteered for Southern Methodist University, Woodberry Forest School, Greensboro Day School, Alamance Presbyterian Church, Jesse Wharton Elementary School, and Senior Resources of Guilford County. 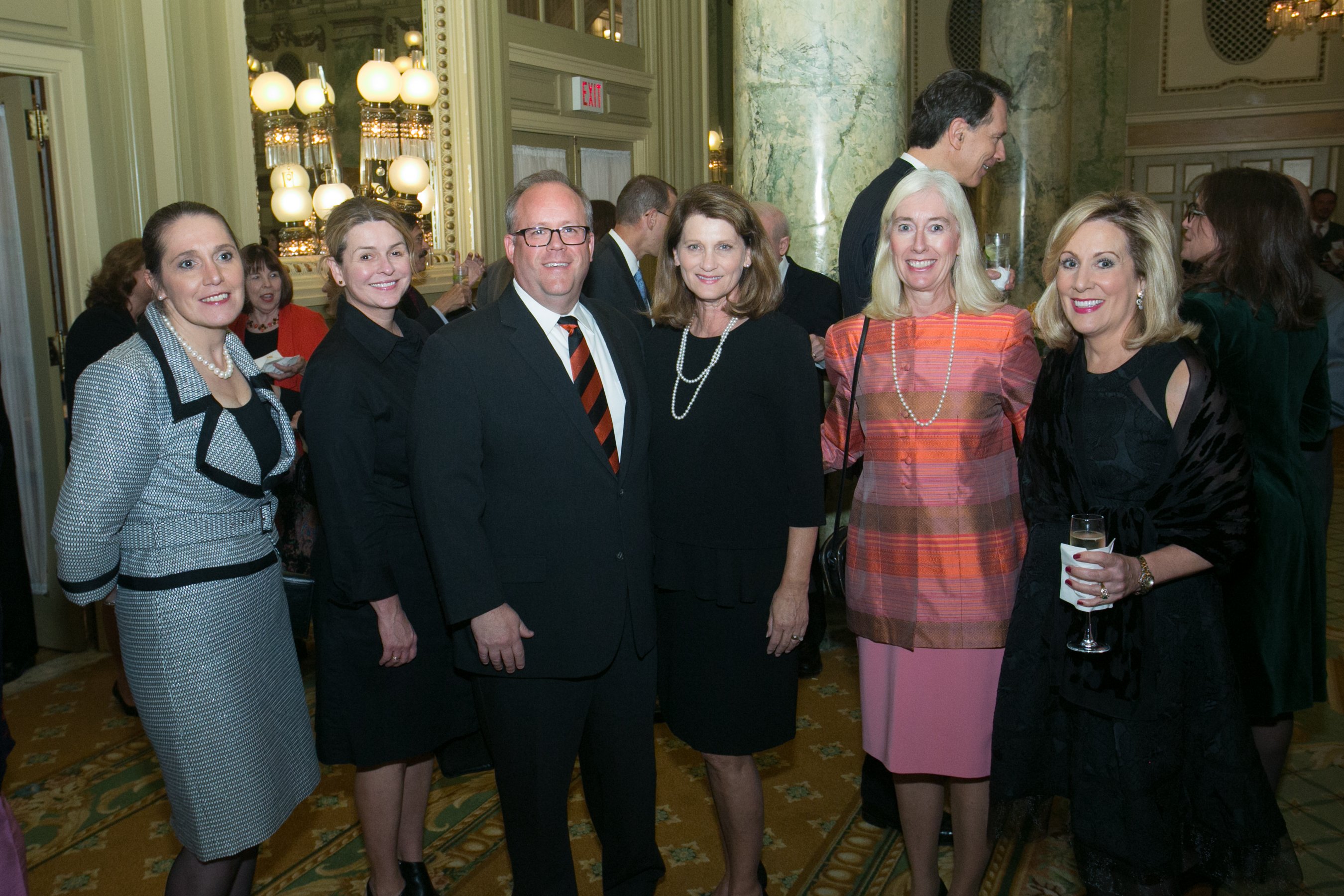 Above: Karen Armstrong, second from right, is pictured at an IWP Chancellor’s Council event with several members of a committee that has helped organize events for IWP in Greensboro, North Carolina.