A Pope and a President:
John Paul II, Ronald Reagan, and the Extraordinary Untold Story of the 20th Century 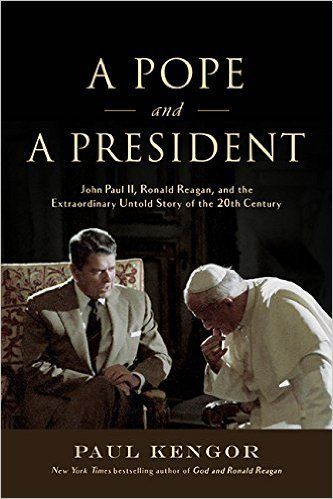 In this fascinating new book, acclaimed scholar and bestselling author Paul Kengor tells the untold story of the partnership between Pope John Paul II and President Ronald Reagan and how together they changed the course of world history. Kengor shows that the bonds between the pope and the president ran deeper than anyone has suspected, and that these bonds drove the two men to confront what they knew to be the great evil of the twentieth century: Soviet communism.

Paul Kengor, Ph.D., is professor of political science at Grove City College, a four-year, private Christian liberal arts college in Grove City, Pennsylvania, and a New York Times bestselling author. He is executive director of the Center for Vision & Values, a Grove City College think-tank/policy center. He is also a visiting fellow at the Hoover Institution on War, Revolution, and Peace at Stanford University. Kengor is an internationally recognized authority on several subjects, particularly Ronald Reagan, the Cold War, and communism. He is often quoted in major publications, and his articles have appeared in numerous publications from across the ideological spectrum. Kengor is a frequent contributor to MSNBC, C-SPAN, NPR, the BBC, PCN-TV, EWTN, and FoxNewsChannel, and is regular columnist for Townhall and the American Spectator. Kengor received his doctorate from the University of Pittsburgh’s Graduate School of Public and International Affairs and his Master’s degree from American University’s School of International Service. He holds an honorary doctorate from Franciscan University (Steubenville, Ohio).