All Measures Short of War:
The Contest For the 21st Century and the Future of American Power

This event is part of the IWP Global Impact Discussion Series. 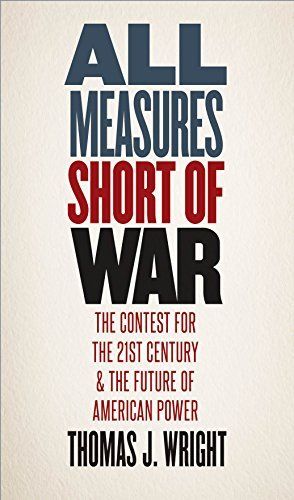 Join us for a discussion with Dr. Tom Wright of his newly released book, All Measures Short of War: The Contest For the 21st Century and the Future of American Power, in which he argues for a new strategy of “Responsible Competition” to strengthen the liberal international order.

About the book: The two decades after the Cold War saw unprecedented cooperation between the major powers as the world converged on a model of liberal international order. Now, great power competition is back and the liberal order is in jeopardy. Russia and China are increasingly revisionist in their regions. The Middle East appears to be unraveling. And many Americans question why the United States ought to lead. What will great power competition look like in the decades ahead? Will the liberal world order survive? What impact will geopolitics have on globalization? And, what strategy should the United States pursue to succeed in an increasingly competitive world? In this book Thomas Wright explains how major powers will compete fiercely even as they try to avoid war with each other. Wright outlines a new American strategy-Responsible Competition-to navigate these challenges and strengthen the liberal order.

About the author: Thomas Wright is the director of the Center on the United States and Europe and a fellow in the Project on International Order and Strategy at the Brookings Institution. He is also a nonresident fellow at the Lowy Institute for International Policy. Previously, he was executive director of studies at the Chicago Council on Global Affairs, a lecturer at the Harris School of Public Policy at the University of Chicago, and senior researcher for the Princeton Project on National Security. Wright has a doctorate from Georgetown University, a Master of Philosophy from Cambridge University, and a bachelor’s and master’s from University College Dublin. He has also held a pre-doctoral fellowship at Harvard University’s Belfer Center for Science and International Affairs and a post-doctoral fellowship at Princeton University.