Assad or We Burn the Country:
How One Family’s Lust for Power Destroyed Syria 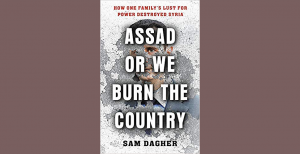 About the book: In spring 2011, Syrian President Bashar al-Assad turned to his friend and army commander, Manaf Tlass, for advice about how to respond to Arab Spring-inspired protests. Tlass pushed for conciliation but Assad decided to crush the uprising — an act which would catapult the country into an eight-year long war, killing almost half a million and fueling terrorism and a global refugee crisis.

Assad or We Burn the Country examines Syria’s tragedy through the generational saga of the Assad and Tlass families, once deeply intertwined and now estranged in Bashar’s bloody quest to preserve his father’s inheritance. By drawing on his own reporting experience in Damascus and exclusive interviews with Tlass, Dagher takes readers within palace walls to reveal the family behind the destruction of a country and the chaos of an entire region.

Dagher shows how one of the world’s most vicious police states came to be and explains how a regional conflict extended globally, engulfing the Middle East and pitting the United States and Russia against one another.

Timely, propulsive, and expertly reported, Assad or We Burn the Country is the definitive account of this global crisis, going far beyond the news story that has dominated headlines for years.

About the speaker: Sam Dagher is a senior correspondent for The Wall Street Journal focused on Syria, Iraq and Iran. He has worked in the Middle East for more than 12 years. He covered Syria starting in spring 2012. He reported from inside Syria for more than two years and was the only Western correspondent working and living in the Syrian capital Damascus fulltime between June 2013 and August 2014. While in Syria, Dagher reported mainly on the steps taken by the regime of Bashar al-Assad to stay in power and the impact of this on the country and its people. Dagher’s first story from inside Syria in October 2012 was about the counterinsurgency strategy adopted by Assad and his allies Iran and Hezbollah in Damascus which involved demolishing entire neighborhoods sympathetic to rebels and standing up loyalist militias.

Dagher also reported on how the regime fueled sectarianism, mobilized loyalist businessmen to evade international sanctions, rallied minorities to fight on its side, besieged and starved opposition areas and contributed to the rise of Islamic militancy in the country. Dagher reported extensively from the strategic central city of Homs, which was subdued by the regime and its allies only after destroying large parts of it and changing its demographics by driving out most of its Sunni inhabitants. Syria’s Sunni Muslim majority is leading the rebellion against Assad. He also spent time in Syria’s largest city Aleppo, a place partitioned by war.

In August 2014 the regime banned Dagher from entering Syria. In October 2014 he was able to enter the Kurdish-controlled part of the country in the northeast, where he reported on how Kurds were battling Islamic State in order to establish their own self-rule area. He also reported on the battle between Kurds and Islamic State for oil resources and the impact of this on people.

Dagher’s work from Syria was nominated by The Wall Street Journal for the Pulitzer and other journalism awards.