You are cordially invited to a book lecture 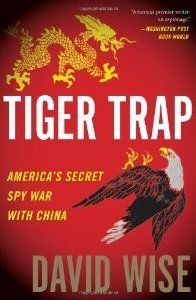 For decades, America obsessed over Soviet spies, while China quietly penetrated the highest levels of government. Now, for the first time, based on innumerable interviews with key insiders at the FBI and CIA as well as with Chinese agents and people close to them, David Wise tells the full story of China’s many victories and defeats in its American spy wars.

Two key cases interweave throughout: Katrina Leung, codenamed Parlor Maid, worked for the FBI for years, even after she became a secret double agent for China, aided by love affairs with both of her FBI handlers. Here, too, is the inside story of the case, codenamed Tiger Trap, of a key Chinese-American scientist suspected of stealing nuclear weapons secrets. These two cases lead to many others, involving famous names from Wen Ho Lee to Richard Nixon, stunning national security leaks, and sophisticated cyberspying. The story leads right up to the present, with a West Coast spy ring whose members were sentenced in 2010-but it surely will continue for years to come, as China faces off against America.

David Wise is America’s leading writer on intelligence and espionage. He is the coauthor of The Invisible Government, a number one bestseller about the CIA. He is also the author of Nightmover, Molehunt, The Spy Who Got Away, and The Politics of Lying, and the coauthor, with Thomas B. Ross, of The Espionage Establishment and The U-2 Affair. He was a commentator on intelligence issues for CNN for six years. A native New Yorker and graduate of Columbia College, he is the former chief of the Washington bureau of the New York Herald Tribune and has contributed articles on government and politics to many national magazines. He lives in Washington, D.C.