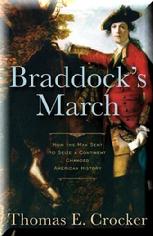 Please join us for a talk with author Thomas E. Crocker about his new book, Braddock’s March, on Monday, March 22 at the Institute of World Politics. Mr. Crocker’s remarks begin at 6:00 p.m., followed by light refreshments and a book signing at 7:00 p.m.

This is the first authoritative history of the disastrous march of 1755 into the American wilderness by 2,500 British troops and colonials, who were calamitously ambushed by French troops and Indian warriors outside present-day Pittsburgh. The battle helped make the career of young George Washington. Daniel Boone was also present, and Benjamin Franklin played a supporting role.

After landing in Alexandria, Virginia, Maj. Gen. Edward Braddock organized his troops and supply chain, threatened to billet soldiers in private homes, and called the first congress of royal governors in America to discuss using local revenue to pay for the expedition—issues that were to drive the future split between the colonies and Britain. In May, the expedition began its nearly 250-mile trek, heroically cutting through dense wilderness, fording rivers, and scaling mountains, while hauling heavy artillery and the first wheeled vehicles ever to cross the Appalachian Mountains. Passing through this area (now Washington, DC), General Braddock said he never found “better dressed or better mannered people” than in Georgetown, where men were “very large and gallant” and women were the “most beautiful that my eyes have ever looked upon,” while the “stately buildings” have “no superiors in England.”

Please RSVP to johnsrud@iwp.edu or 202-462-2101. This event is co-sponsored by the Fort Edwards Foundation (www.fortedwards.org).