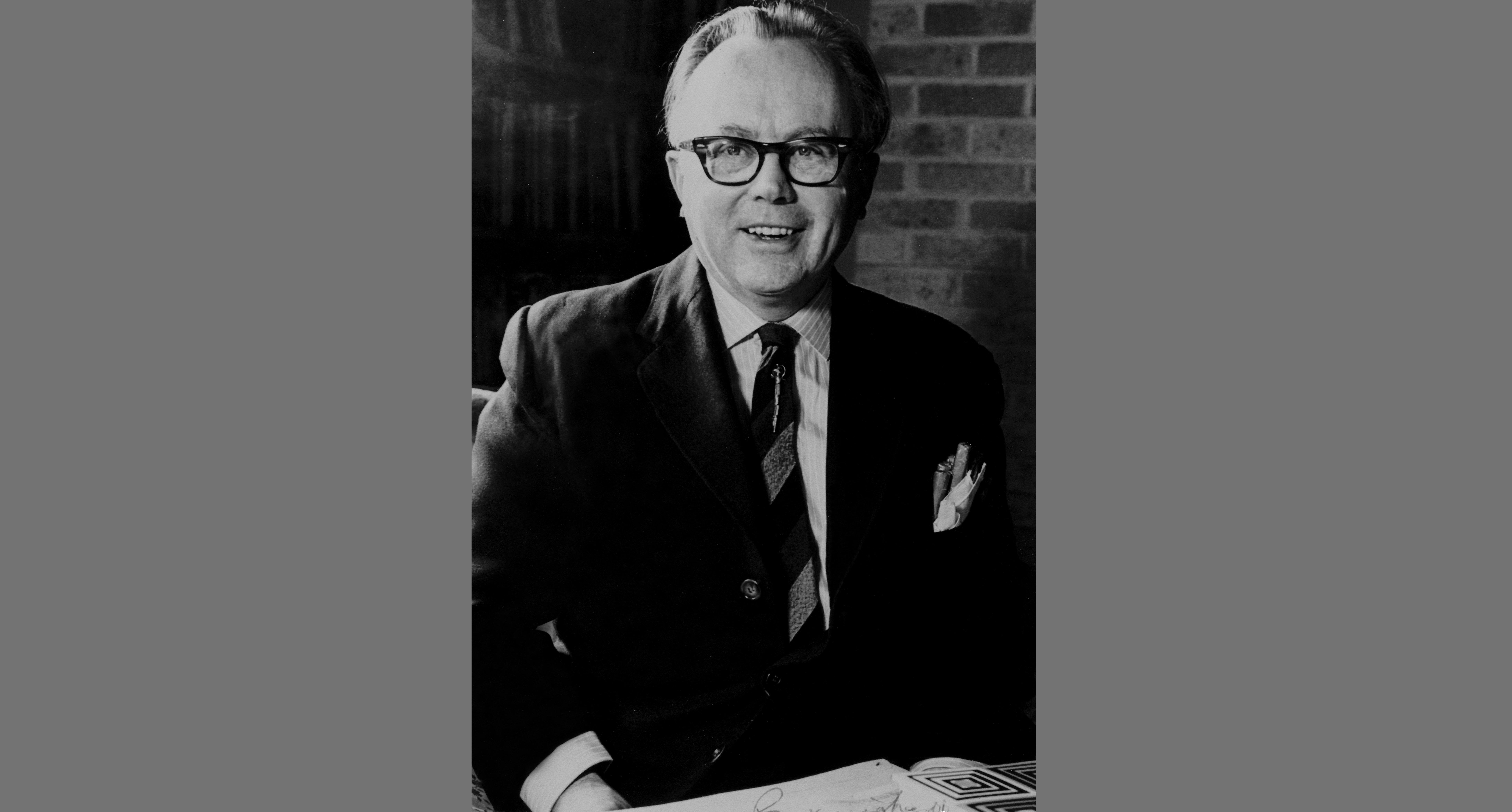 About Dr. Russell Kirk: For more than forty years, Russell Kirk was in the thick of the intellectual controversies of his time. He is the author of some thirty-two books, hundreds of periodical essays, and many short stories. Both Time and Newsweek have described him as one of America’s leading thinkers, and The New York Times acknowledged the scale of his influence when in 1998 it wrote that Kirk’s 1953 book The Conservative Mind “gave American conservatives an identity and a genealogy and catalyzed the postwar movement.” Dr. Kirk wrote and spoke on modern culture, political thought and practice, educational theory, literary criticism, ethical questions, and social themes. He addressed audiences on hundreds of American campuses and appeared often on television and radio.

He edited the educational quarterly journal The University Bookman and was founder and first editor of the quarterly Modern Age. He contributed articles to numerous serious periodicals on either side of the Atlantic. For a quarter of a century he wrote a page on education for National Review, and for thirteen years published, through the Los Angeles Times Syndicate, a nationally syndicated newspaper column. Over the years he contributed to more than a hundred serious periodicals around the world, among them Sewanee Review, Yale Review, Fortune, Humanitas, The Contemporary Review, The Journal of the History of Ideas, World Review, Crisis, History Today, Policy Review, Commonweal, Kenyon Review, The Review of Politics, and The World and I. He is the only American to hold the highest arts degree (earned) of the senior Scottish university—doctor of letters of St. Andrews. He received his bachelor’s degree from Michigan State University and his master’s degree from Duke University. He received honorary doctorates from twelve American universities and colleges. He was a Guggenheim Fellow, a senior fellow of the American Council of Learned Societies, a Constitutional Fellow of the National Endowment for the Humanities, and a Fulbright Lecturer in Scotland. The Christopher Award was conferred upon him for his book Eliot and His Age, and he received the Ann Radcliffe Award of the Count Dracula Society for his Gothic Fiction. The Third World Fantasy Convention gave him its award for best short fiction for his short story, “There’s a Long, Long Trail a-Winding.” In 1984 he received the Weaver Award of the Ingersoll Prizes for his scholarly writing. For several years he was a Distinguished Scholar of the Heritage Foundation. In 1989, President Reagan conferred on him the Presidential Citizens Medal. In 1991, he was awarded the Salvatori Prize for historical writing. His second book, The Conservative Mind (1953), is one of the most widely reviewed and discussed studies of political ideas in this century and has gone through seven editions.

Kirk was born near the railroad yards at Plymouth, Michigan, in 1918 and lived much of his life at his ancestral place, Piety Hill, in Mecosta, Michigan—a little village in the stump-country. There he converted a toy factory into his library and office. His Italianate house is adorned with sculpture and architectural antiques snatched from the maws of the urban renewers of western Michigan. At home he was a famous narrator of ghostly tales, many of them picked up during his travels (often afoot) in Scotland and Ireland, Mediterranean and Alpine lands, and Africa. For nearly thirty years Kirk was married to Annette Yvonne Cecile Courtemanche; they had four daughters: Monica, Cecilia, Felicia, and Andrea. Their tall house was often crowded with Asiatic, African, and European refugees and exiles and also with university students, travelers from antique lands, and congeries of fugitives from Progress. In conjunction with the Intercollegiate Studies Institute and the Wilbur Foundation, Russell and Annette Kirk held frequent seminars at their residence and received several literary interns every year. Annette Kirk was an active member of the National Commission on Excellence in Education and is now President of the Russell Kirk Center. Dr. Kirk passed away on April 29, 1994. His work is continued by the Russell Kirk Center.

Matthew J. O’Brien currently serves as the Director of Research at the Federation for American Immigration Reform. Over the past twenty years he has held a wide variety of positions focusing on immigration issues, both in government and in the private sector. Prior to joining FAIR Matt served as the Chief of the National Security Division (NSD) within the Fraud Detection and National Security Directorate (FDNS) at U.S. Citizenship and Immigration Services (USCIS), where he was responsible for formulating and implementing procedures to protect the legal immigration system from terrorists, foreign intelligence operatives, and other national security threats. He has also held positions as the Chief of the FDNS Policy and Program Development Unit, as the Chief of the FDNS EB-5 Division, as Assistant Chief Counsel with U.S. Immigration & Customs Enforcement, as a Senior Advisor to the Citizenship and Immigration Services Ombudsman, and as a District Adjudications Officer with the legacy Immigration & Naturalization Service. In addition, Matt has extensive experience as a private bar attorney. He holds a Bachelor of Arts in French from the Johns Hopkins University and a Juris Doctor from the University of Maine School of Law. He is currently a student in the Institute of World Politics Executive Master of Arts in National Security Affairs program.

Dr. Lee Edwards is a distinguished fellow in conservative thought at The Heritage Foundation. Edwards is a leading historian of American conservatism and the author or editor of 25 books. Edwards also is adjunct professor of politics at the Catholic University of America and chairman of a foundation that dedicated the Victims of Communism Memorial in Washington, D.C., in 2007. His books include biographies of Ronald Reagan, Barry Goldwater, William F. Buckley, Jr. and Edwin Meese III as well as histories of The Heritage Foundation and the American conservative movement. His works have been translated into Chinese, Japanese, French, Hungarian and Swedish. Edwards’ next book, written with Elizabeth Edwards Spalding, is A Brief History of the Cold War, to be published by Regnery in the spring of 2016. Edwards was the founding director of the Institute of Political Journalism at Georgetown University and a fellow at the Institute of Politics at the John F. Kennedy School of Government at Harvard University. He is a past president of the Philadelphia Society and a media fellow at the Hoover Institution. He has appeared frequently on broadcast and cable outlets such as Fox News Channel, CNN, Bloomberg, NBC, PBS, C-SPAN and NPR. His work has been published in The Wall Street Journal, The Boston Globe, Los Angeles Times, National Review, Human Events, Claremont Review of Books and The American Spectator, among other places. His awards and honors include the Order of Merit of the Republic of Hungary, the Millennium Star of Lithuania, the Cross of Terra Mariana of Estonia, the Friendship Medal of Diplomacy from the Republic of China (Taiwan), the John Ashbrook Award, the Reed Irvine Media in Accuracy Award, Legend of YAF from Young America’s Foundation, and the Walter Judd Freedom Award. Edwards received a doctorate in world politics from Catholic University as well as a doctor of humane letters degree from Grove City College. He did graduate work at the Sorbonne in Paris. He also holds a bachelor of arts degree in English from Duke University.

Dr. Marek Jan Chodakiewicz is the current holder of the Kosciuszko Chair of Polish Studies, which is now here at IWP. He has authored numerous works in both English and Polish. While at the University of Virginia, he edited the Kosciuszko Chair’s bulletin: Nihil Novi. Dr. Chodakiewicz writes weekly columns for popular Polish press and contributes to the SELOUS Foundation internet hub. He has also published on foreign policy in various venues, including The Journal of World Affairs, American Spectator, and National Review Online. In addition to numerous popular and scholarly articles, Dr. Chodakiewicz authored, co-authored, edited, and co-edited over fifteen scholarly monographs and documentary collections. His latest include Intermarium: The Land Between the Black and Baltic Seas(2012), which is a depiction of the Eastern Borderlands of the West on the rim of the former Soviet Union, and On the Right and Left (2013), which is a textbook of intellectual history of modern ideologies. He translated and edited the correspondence of the Ulam family of Lwów to the mathematician Stanislaw Ulam at Harvard from 1936 until after the Second World War and co-edited a selection of Ronald Reagan’s speeches published as My Vision of America in Polish. His interests include the post-Soviet zone, the Second World War and its aftermath, Europe in the 19th and 20th century, Western civilization and its intellectual tradition, extremist movements in history, conspiracy theory and practice, and comparative civilizations. At IWP, Dr. Chodakiewicz teaches courses on Mass Murder Prevention in Failed and Failing States, Geography and Strategy, and Russian Politics and Foreign Policy. In addition, he leads directed studies.