FEDERAL PIANIST (THE RUEFUL TALES OF THE ONLY ONE)
with
Dr. John Robilette 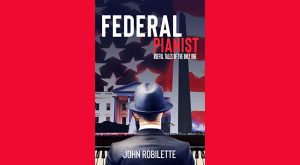 This book lecture will discuss Federal Pianist: The Rueful Tales of the Only One and will transition to a public diplomacy panel and Q&A with both author Dr. John Robilette and IWP President Dr. John Lenczowski.

About the book: In the halcyon days of the Reagan administration, a young artist was brought in to give the president’s closest friend piano lessons with White House clearance as a political appointee. What the young pianist saw is what few Americans knew. In this true but little known story, John Robilette has changed the names in a novelized account of being the only Reagan appointee that was fired and rehired before creating a public diplomacy program that helped to win the Cold War. And not with the firing of a gun, but with classical music in 63 countries around the world. This sad, comical and explosive story of an innocent in the vortex of power is a must for Americans who are interested in their government, humor, and the arts.

“John Robilette is a brilliant pianist and famous international performer — but, as he shows in this fascinating little book, he was keeping his eyes wide open in that world he so crowned. ‘Federal Pianist,’ based on his own rich experience with the arts in the federal government is alternatively engrossing, sad, and comical. Bravely, he opens a heretofore closed door into the little-known world of arts and foreign policy; you’d be wise to walk right in.”

About the author: John Robilette is an international concert pianist who has performed in 26 countries around the world including some of its major classical music venues. He has also recorded commercial CDs’ of solo pieces as well as piano concerti with leading orchestras in Europe. Also now a SAG actor, he has had the lead or supporting roles in nine independent films, many of which were officially selected in film festivals around the United States and in Tokyo, Japan. He further wrote, directed, and produced a 30-minute short comedy film entitled, “My Piano Lesson.” This year he has been named to the 26th Annual SAG awards nominating committee to determine the best male and female actors in drama and comedy for television. He holds a Master of Fine Arts degree from UCLA, a Doctor of Musical Arts from the Catholic University of America with earlier studies at the École Normale de Musique in Paris, France. Dr. Robilette has further served on the piano faculties of two universities and given master classes around the world. As a young man in 1981, he was asked to play a recital at the inauguration of President Ronald Reagan. Subsequently, he was brought into the administration as a political appointee where he created and directed the Artistic Ambassador Program for the United States Information Agency from 1983-1989. This was an intercultural exchange program revolving around classical music which became popular in 63 countries around the world and was honored at the White House.