You are cordially invited to the lecture on the topic:

Israel’s Energy Security and Strategy: Changing Dynamics in the Age of Gas
with
Dr. Sujata Ashwarya 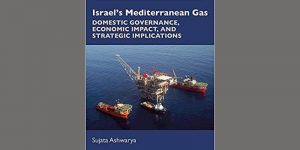 About the lecture: Until about two decades ago, Israel imported 98 percent of its energy requirements from far off places on the globe. Although located in a region rich in oil and gas, relation of political enmity with the producers effectively rendered the Jewish state an energy island, isolated from intra-regional energy trade and electricity grids. Securing energy supply from abroad has always been a major concern of Israeli policymakers. However, with the discovery of natural gas in its Mediterranean waters, Israel’s energy-dependent status is changing rapidly. Today, close to 70 percent of Israel’s electricity is generated from natural gas; the rest comes from imported coal. Israel’s transportation still relies exclusively on imported oil, a small amount of which is also used in industrial, residential and commercial sectors. In order to reduce reliance on imported energy and encourage the increased uptake of natural gas across a variety of end-use sectors, the Israeli government is providing several incentives to the consumers, including subsidies and tax breaks. National plans to integrate renewable energy and alternative sources of energy, such as methanol, into the consumption mix, as well as energy efficiency programs launched by the government are also integral to Israel’s energy security strategy. To meet its growing energy requirement and vulnerability vis-à-vis the imports of fossil fuels, Israel – similar to other large energy consumers, such as, India, China and Turkey – has evolved a multi-faceted energy security strategy, which has six essential components. These include, broadening of import; pursuit of proximate supply sources; constant search for indigenous energy; development of renewables and alternatives; ensuring physical security of energy installations; and promotion of energy efficiency. This lecture will talk about each of these components and assess the on-going transformation of Israel’s energy status from import-dependency to energy self-sufficiency that is underpinned by the gas discoveries.

About the speaker: Dr. Sujata Ashwarya is Associate Professor in the Centre for West Asian Studies [Middle Eastern], Jamia Millia Islamia, New Delhi, India. She received her MPhil and PhD degrees in West Asian Studies from Jawaharlal Nehru University, New Delhi. She was awarded research fellowships at the Rothberg International School, Hebrew University of Jerusalem, Israel; Maison des Sciences de l’Homme (MSH) and Centre d’Etudes et des Recherches Internationales (CERI), Paris; and the Schusterman Centre for Israel Studies, Brandeis University, USA. She was also affiliated as a researcher at the Faculty of World Studies, University of Tehran, Iran. Her research interests cover a wide range of areas related to politics, economics and international relations of West Asia. Of primary focus are the domestic development, foreign policy and strategic-security issues (especially those related to Iran, Iraq and Israel), politics of energy, conflict and peace-making, and themes related to civil society and democratization in the region. She also has a strong interest in exploring India’s West Asia policy. A frequent traveler, Dr Ashwarya has presented more than 50 research papers in national and international conferences and seminars. She has more than 30 published research articles and has written, edited and co-edited 5 books. Her books include, Israel’s Mediterranean Gas: Domestic Governance, Economic Impact, and Strategic Implications (Routledge, 2019), Contemporary West Asia: Perspectives on Change and Continuity (co-edited; Routledge, 2019); India-Iran Relations: Progress, Problems and Prospects (Routledge, 2017); Essays on Iran and Israel: An Indian Perspective(Knowledge World, 2014); and Civil Society, Democracy and State in West Asia (edited; New Century, 2010).