Please join us on Friday, March 11 as Hon. Edwin Meese III, 75th Attorney General of the United States and the chief advisor to President Reagan, hosts the next film in our Movie Night series, In the Face of Evil: Reagan’s War in Word and Deed.

6:00 Reception
7:00 PM Introductory remarks by Hon. Edwin Meese, followed by a showing of the film
9:00 PM Post-reception and panel discussion.

Mr. Meese will be joined by

Peter Schweizer
Executive Producer and the author of the book Reagan’s War, on which the movie was based

Stephen K. Bannon
Writer, Director, and Producer of the film 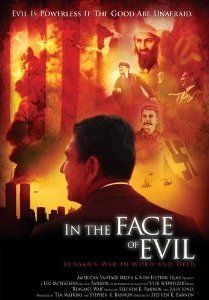 In the Face of Evil: Reagan’s War in Word and Deed

“When action is required to preserve our national security, we will act. We must act today in order to preserve tomorrow, and let there be no misunderstanding we are going to begin to act, beginning today.”

He freed a billion slaves from their Communist masters… This is the story of that achievement: of one man’s triumph during the bloodiest and most barbaric century in mankind’s history: the 20th century.

In the Face of Evil: Reagan’s War in Word and Deed is a man and nation’s journey through the heart of darkness-and what that journey means for us today. This film is not a biography of Ronald Reagan, but a hard-hitting look at leadership and moral courage. Based on Peter Schweizer’s acclaimed bestseller, Reagan’s War, the new feature-length documentary film, In the Face of Evil, chronicles the brutal conflict between totalitarianism and freedom as seen through Ronald Reagan’s forty-year confrontation with Communism. 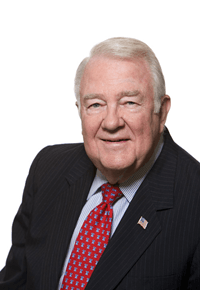 Edwin Meese III is a prominent leader, thinker and elder statesman in the conservative movement – and America itself.

Meese holds the Ronald Reagan Chair in Public Policy at The Heritage Foundation, where he is responsible for keeping the late president’s legacy of conservative principles alive in public debate and discourse.

He also is Chairman of Heritage’s Center for Legal and Judicial Studies, founded in 2001 to educate government officials, the media and the public about the Constitution, legal principles and how they affect public policy.

These two Heritage “hats” keep Meese, a trusted counselor to Reagan before becoming Attorney General, among the major conservative voices in national policy debates at an age when most men and women enjoy quiet retirements.

In 2006, for example, Meese was named to the Iraq Study Group, a special presidential commission dedicated to examining the best resolutions for America’s involvement in Iraq.

Immediately after Reagan’s death in 2004, and in the years since, Meese appeared on the major cable and broadcast news programs to discuss the lasting impact of his old friend, mentor and boss. He often summarizes the Reagan legacy in three accomplishments: 1) Reagan cut taxes and kept them low. 2) He worked to defeat and end the Soviet Union and its worldwide push for communism. 3) He restored America’s faith in itself after years of failure and “malaise.”

“I admired him as a leader and cherish his friendship,” Meese wrote in a 2004 essay for Heritage members and supporters. “Ronald Reagan had strong convictions. He was committed to the principles that had led to the founding of our nation. And he had the courage to follow his convictions against all odds.”

Meese spent much of his adult life working for Reagan, first after the former actor, sports announcer and athlete was elected Governor of California in 1966 and then when he sought and won the presidency in 1980.

Meese served as the 75th Attorney General of the United States from February 1985 to August 1988. As the nation’s chief law enforcement officer, he directed the Justice Department and led international efforts to combat terrorism, drug trafficking and organized crime.

From January 1981 to February 1985, Meese held the position of Counsellor to the President – the senior job on the White House staff – and functioned as Reagan’s chief policy adviser. In 1985, he received Government Executive magazine’s annual award for excellence in management.

Meese joined Heritage in 1988 as the think tank’s first Ronald Reagan Distinguished Fellow – the only policy chair in the country to be officially named for the 40th president.

His relationship with Heritage began eight years earlier, however, when Meese met with senior management to discuss the think tank’s landmark policy guide, Mandate for Leadership, prepared for the incoming administration. Meese later recalled that Reagan personally handed out copies of the 1,093-page book to members of his Cabinet and asked them to read it. Nearly two-thirds of Mandate’s 2,000 recommendations would be adopted or attempted by the Reagan Administration.

Meese took on a new role as Chairman of Heritage’s Center for Legal and Judicial Studies more than a decade after joining the think tank. Under his guidance, the center has counseled White House staffers, Justice Department officials and Senate Judiciary Committee members on the importance of filling judicial vacancies with qualified men and women who are committed to interpreting the Constitution according to the founding document’s original meaning.

The center also became known for hosting “moot court” practice sessions to sharpen the arguments of attorneys slated to bring important cases before the Supreme Court. Those cases addressed constitutional issues ranging from property rights to racial preferences in primary and secondary schools to restrictions on free speech in campaign finance law.

Meese headed the center’s Advisory Board for the writing and editing of the best-selling book, The Heritage Guide to the Constitution (Regnery, 2005). The book assembles 109 experts to walk readers through a clause-by-clause analysis of the Constitution. Sen. Tom Coburn (R-Okla.) was among those keeping the reference work handy during Judiciary Committee hearings on Supreme Court nominees.

Meese’s other books include Leadership, Ethics and Policing (Prentice Hall, 2004); Making America Safer (Heritage, 1997); and With Reagan: The Inside Story (Regnery Gateway, 1992).

He also is a Distinguished Visiting Fellow at the Hoover Institution at Stanford University in California and lectures, writes and consults throughout the United States on a variety of subjects.

As both Attorney General and Counsellor to President Reagan, Meese was a member of the Cabinet and the National Security Council. He also served as Chairman of the Domestic Policy Council and the National Drug Policy Board.

After Reagan won the White House in the 1980 election, Meese headed the transition team. In the campaign, he was the Reagan-Bush Committee’s senior official.

During the Reagan governorship, Meese served as Executive Assistant and Chief of Staff from 1969 through 1974 and as Legal Affairs Secretary from 1967 through 1968. He previously was Deputy District Attorney in Alameda County, Calif.

Reagan never forgot Meese’s loyalty and hard work over the years. During a press conference at which reporters questioned Meese’s actions at the Justice Department, Reagan replied: “If Ed Meese is not a good man, there are no good men.”

Meese had a career outside government and politics. From 1977 to 1981, he was a Professor of Law at the University of San Diego, where he also directed the Center for Criminal Justice Policy and Management.

He was an executive in the aerospace and transportation industry as Vice President for Administration of Rohr Industries Inc. in Chula Vista, Calif. He left Rohr to return to the practice of law, doing corporate and general work in San Diego County.

Edwin Meese III was born Dec. 2, 1931, to Edwin Jr. and Leone Meese in Oakland, Calif. He graduated from Yale University in 1953 and holds a law degree from the University of California-Berkeley. A retired Colonel in the Army Reserve, he remains active in numerous civic and educational organizations.

He and his wife, Ursula, have two grown children and reside in McLean, Va.