In coordination with Aquila Polonica Publishing, this event will mark the release of the book by Arkady Fiedler entitled, 303 Squadron: The Legendary Battle of Britain Fighter Squadron.

This event is being held to reiterate America’s commitment to Europe and the defense of freedom and democracy by commemorating the 71st anniversary of the Battle of Britain, and the Royal Air Force’s highest scoring squadron, the 303rd Kosciuszko Squadron.

Though 303 Squadron entered the battle two months after it began, the Polish fliers scored more aerial combat victories in the Battle of Britain than any other squadron.

Composed of Polish exiles fighting for the freedom of their homeland and the Allied cause, by the end of the war, 303 Squadron had flown its Hurricanes, Spitfires, and Mustangs on almost 10,000 combat sorties, shooting down 297 enemy aircraft. 303 Squadron’s badge is proudly displayed as the symbol of the Kościuszko Chair of Polish Studies at The Institute of World Politics. 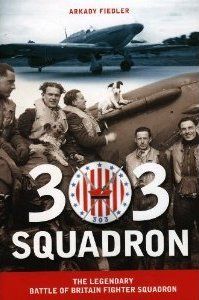 Winner of the 2011 Benjamin Franklin GOLD Award for HISTORY and SILVER Award for INTERIOR DESIGN.

Thrilling action story of the famous squadron of Polish fighter pilots whose superb aerial skills helped save Britain during its most desperate hours. Underdog heroes who rose to defend against the deadliest German Luftwaffe attacks, the pilots of 303 Squadron were lionized by the British press, congratulated by the King, and adored by the British public. “About as exciting as it gets…a must-read.” –The Washington Times