You are cordially invited to a presentation on the topic: 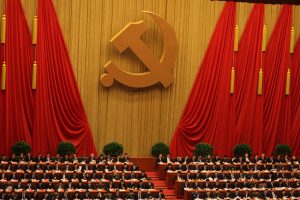 About the lecture: What sorts of people rise to leadership in the Chinese Communist Party? How do they get to the top? What qualities define them? How should we deal with them? A retired American diplomat speaks from his experience in China.

About the speaker: William McCahill joined NBR as a Senior Resident Fellow in July 2016. His work focuses on Chinese politics and policy. Before joining NBR, Mr. McCahill had worked in Hong Kong and China as the Senior Advisor for China at Mirabaud & Cie., a Swiss private bank headquartered in Geneva, and earlier in a similar capacity for Religare Capital Markets. He had previously co-founded and managed a China-focused equities and macro research firm, opened the Beijing office of a major American law firm, and operated a business consultancy in China. A 25-year Foreign Service career preceded McCahill’s business activities. He began his diplomatic service in Hong Kong, Taiwan, and Beijing; subsequently held senior posts at US missions in Western Europe, Scandinavia, and Canada; and in 2000 retired from his last posting as Chargé d’affaires at the U.S. Embassy in Beijing. His academic background includes degrees from Boston College and Harvard University in Theology, English, the History of Religion, and Sanskrit & Indian Studies.

-The 19th Chinese Communist Party Congress: Implications for the United States and Its Allies