You are cordially invited to the inaugural presentation of IWP’s Asian Initiative lecture series – a two-day event.

* Both events will be off the record. 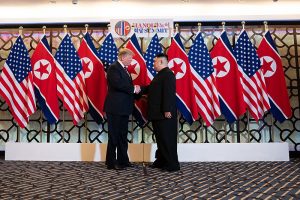 About the Lecture and Panel Presentation: North Korea remains a highly critical foreign policy and intelligence issue for not just the U.S., but for the international community as well. A new, relatively untested leader with a burgeoning weapons inventory – both nuclear and conventional, and a penchant for unpredictability, Kim Jong-un represents both an enigma and an unprecedented dilemma. From what appeared to be a relatively promising first ever meeting between a North Korean leader and a sitting U.S. President in Singapore to a disappointing sequence of events in Hanoi, the current situation on the Korean peninsula remains potentially extremely volatile.

About the Speaker and Panel Members: On October 15th, former ROK Minister of National Defense, Gen. Kim Dong-shin will present a lecture based on his significant experiences as part of the national leadership during the myriad inter-Korean dialogue as well as his assessment as to the path forward in addressing what is undoubtedly one of the most pressing national security and foreign policy issues of our time.

On October 16th, panel members in addition to Gen. Kim, include Gen. John Tilelli, Jr., former Commander in Chief of the United Nations Command, and concurrently Commander of U.S. Combined Forces, and U.S. Forces Korea; Dr. Victor Cha, former Director for Asian Affairs at the National Security Council and currently a senior advisor and holder of the Korea Chair at the Center for Strategic and International Studies; Mr. Bruce Klingner, former CIA Deputy Director for Korea analysis and currently the senior research fellow for Northeast Asia at The Heritage Foundation’s Asian Studies Center.