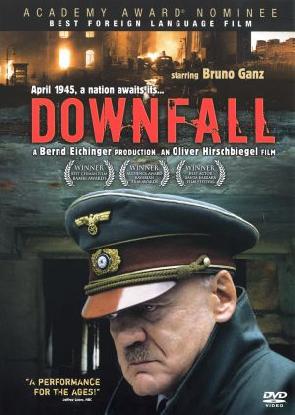 Please join us on Friday, October 28 for the next film in our Movie Night series, Downfall. Your host for the evening will be IWP student Daniel Acheson, who will introduce the film and lead a discussion at its conclusion.

Downfall (2004), starring Bruno Ganz as Adolf Hitler and Alexandra Maria Lara as Hitler’s personal secretary, Traudl Junge, is an epic war film depicting the final ten days of Hitler’s life in his Berlin bunker and Nazi Germany in 1945. The dialogue is in German with English subtitles. Downfall was nominated for an Academy Award for Best Foreign Language Film. Eric Hansen of the Hollywood Reporter has called Downfall “One of the best war movies ever made” and Timothy Ryback of the Wall Street Journal says, “Downfall is indeed a masterpiece of historical accuracy and cinematic drama.” To view the trailer, please click here.

Please RSVP here. We hope you will join us!