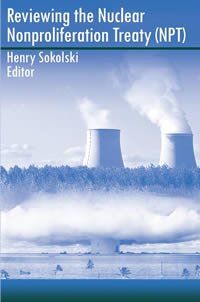 Please join us for a luncheon presentation at IWP on Monday, June 14th by Prof. Henry Sokolski, who will be discussing his latest publication, Reviewing the Nuclear Nonproliferation Treaty (NPT), which he edited and the results of the most recent NPT Review Conference, which concluded its business May 28, 2010. The luncheon will begin at 12:00, and the lecture will begin at 12:30 p.m. in IWP’s main building. A brief description of the issues to be covered is given below:

After three weeks of expanded debate and negotiation, the Nuclear Nonproliferation Treaty (NPT) Review Conference at the United Nations in New York concluded on May 27 with a final declaration that all 189 NPT members sign off on. Controversy over the declaration’s demand that Israel rid itself of its nuclear weapons holdings ensued almost immediately. President Obama and officials at the State Department regretted this demand but noted that the declaration would “only strengthen the NPT as a critical part of our efforts to ensure that all nations meet their NPT obligations or face consequences.” Get a run down on the key results of the NPT review conference along with an assessment of how helpful or harmful the new declaration might be to the treaty’s operational future.

If you plan to attend, please RSVP to kbridges@iwp.edu. We hope you will join us.