You are cordially invited to the premiere of:
Poland, Martial Law’s 40th Anniversary (13 December 1981-13 December 2021)
with
Dr. Marek Jan Chodakiewicz 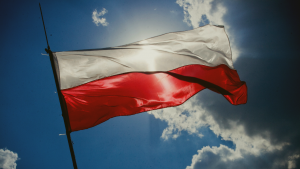 About the lecture: On December 13, 1981, the Communist regime imposed martial law in Poland. The objective was to crush “Solidarity,” a Polish national liberation movement which was masking as the Soviet Bloc’s first independent, self-governed trade union. Thousands were imprisoned, and hundreds died when the red riot police and military assaulted industrial plants, mines, offices, and universities. Inspired by John Paul II and assisted by the Catholic Church, the Poles resisted underground.

Afterwards the Communists claimed that they saved Poland from a Soviet invasion. They had no choice but destroy “Solidarity” because the Soviets were going to attack otherwise.

However, Moscow preferred for Warsaw to restore order itself. In fact, Poland’s Communist dictator General Wojciech Jaruzelski himself begged the Kremlin to intervene.

Ultimately, Jaruzelski himself carried out the Soviet Union’s orders and destroyed overt “Solidarity.” He did not do it for “Poland” or “the Poles.” He lashed out at “Solidarity” because he feared punishment by the Kremlin.

Woven into our analysis, we supply also some personal recollections, naming names of our confederates and sharing the events that we participated in.

About the speaker: Dr. Marek Jan Chodakiewicz holds The Kosciuszko Chair in Polish Studies at The Institute of World Politics and leads IWP’s Center for Intermarium Studies. At IWP, he also serves as a Professor of History and teaches courses on Geography and Strategy, Contemporary Politics and Diplomacy, Russian Politics and Foreign Policy, and Mass Murder Prevention in Failed and Failing States. He is the author of Intermarium: The Land Between the Black and Baltic Seas and numerous other books and articles. He holds a Ph.D. from Columbia University and has previously taught at the University of Virginia and Loyola Marymount University.