You are cordially invited to a book discussion for

This event is co-sponsored by the FPI Center for Military and Diplomatic History.
Dr. Mark Moyar, Director of the Center, will serve as moderator. 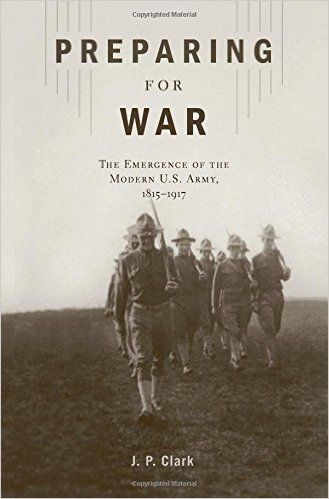 The U.S. Army has always regarded preparing for war as its peacetime role, but how it fulfilled that duty has changed dramatically over time. J. P. Clark traces the evolution of the Army between the War of 1812 and World War I, showing how differing personal experiences of war and peace among successive generations of professional soldiers left their mark upon the Army and its ways.

Nineteenth-century officers believed that generalship and battlefield command were more a matter of innate ability than anything institutions could teach. They saw no benefit in conceptual preparation beyond mastering technical skills like engineering and gunnery. Thus, preparations for war were largely confined to maintaining equipment and fortifications and instilling discipline in the enlisted ranks through parade ground drill. By World War I, however, Progressive Era concepts of professionalism had infiltrated the Army. Younger officers took for granted that war’s complexity required them to be trained to think and act alike—a notion that would have offended earlier generations. Preparing for War concludes by demonstrating how these new notions set the conditions for many of the successes—and some of the failures—of General Pershing’s American Expeditionary Forces.

A former member of the history faculty at West Point, J. P. Clark is an active duty army officer who has served as a strategic advisor to senior civilian and military officials in the Pentagon and British Ministry of Defence.