Russification vs Westernization: battle for hearts and minds of Belarusians
with
Franak Viačorka 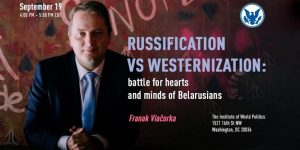 About the lecture: Belarus can’t find a way out of geopolitical turbulence. In contrast to neighboring Ukraine, Russian meddling here is mostly done through soft power. But the Belarusian society is growing more resilient in the face of the Kremlin’s narratives. Confronting Russian revanchism, Belarusians embrace their pre-soviet history, like a heritage of Grand Duchy of Lithuania and Rzeczpospolita. Before Presidential elections next year, and Population census this fall, a discussion about identity and national ideology is intensifying. What can the West do about it?

About the Speaker: Franak Viačorka is the Vice President of the Digital Communication Network. He concurrently works as the consultant for U.S. Agency for Global Media, and he is the Creative Director of RFE/RL Belarus Service. Mr. Viačorka is a frequent speaker and advocate for democracy and personal freedom in post-Soviet countries. An expert in Russian disinformation, he recently published research on the Kremlin-backed media, Russian Orthodox church, and think-tanks as the Kremlin’s “soft-power.”

Mr. Viačorka is the founder and vice president of the Belarusian cultural initiative Art Siadziba. In 2014, after the Ukrainian Revolution of Dignity, he launched a nationwide campaign promoting the national identity of Belarus.” Before that, he served as a leader of the youth wing of the Belarusian Popular Front (BNF).

After suffering through torture while serving under forced conscription in the Belarusian army, Mr. Viačorka’s personal story became the plot for the award-winning, Polish-French film Viva Belarus. His work in Belarus has been chronicled by documentary filmmakers and recognized by many international organizations, including the National Endowment for Democracy, Freedom House, and Open Society Foundations. Mr. Viačorka was the first Vaclav Havel fellow for RFE/RL under Havel’s personal recommendation.