IWP plans to stream a special day-long debate event examining the past, present, and future of Socialism/Communism.

Socialism Then and Now: Is it Poised for a Comeback?

Michael Anton: Former member of the National Security Council.
Marek Chodakiewiz: Professor of History at the Institute of World Politics.
Ronald Radosh: Historian, former Marxist, and author of The Rosenberg File.
Michael Gonzalez: Senior fellow at the Douglas and Sarah Allison Center for Foreign Policy at the Heritage Foundation.
Bhaskar Sunkara: Founding editor and publisher of Jacobin Magazine.
Micah Uetricht: Author and managing editor of Jacobin.
Eric Blanc: Author and contributor to Jacobin and The Nation.
Nicole Aschoff: Sociologist and author of The New Prophets of Capital. 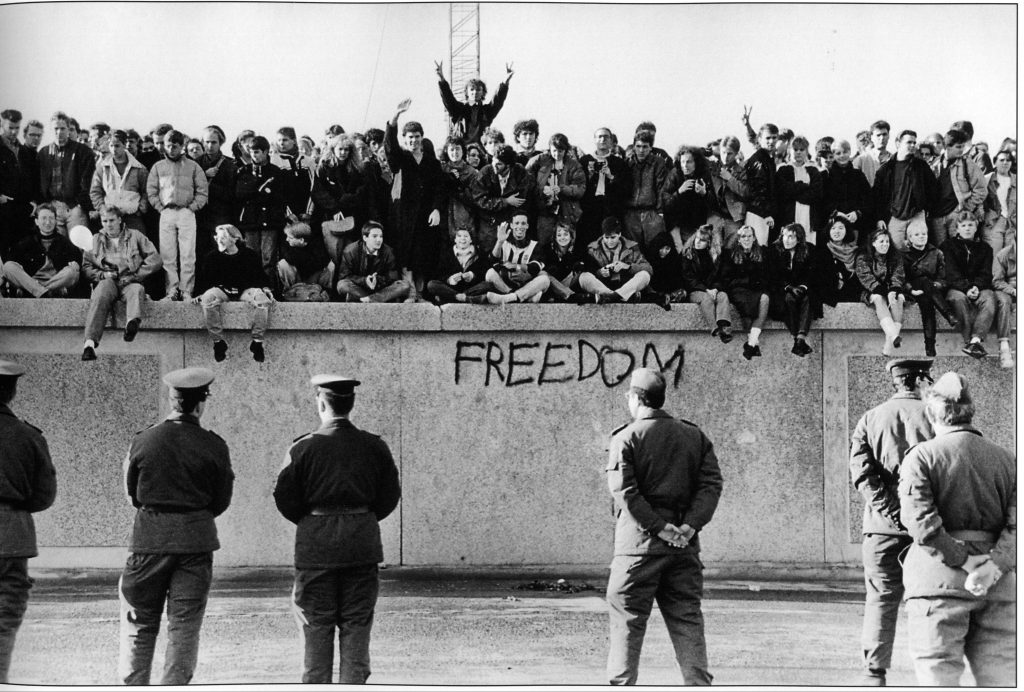 About the Event: On November 15, 2019, the Institute of World Politics plans to stream a special day-long debate event examining the past, present, and future of Socialism/Communism. Sponsored by the Claremont Institute together with the Victims of Communism Memorial Foundation and produced by the Imprimatur Group to mark the 30th anniversary of the fall of the Berlin Wall, the program will feature a morning debate on the economic viability of a socialist or communist system while the afternoon session will explore the nature of cultural Marxism, which has been argued to have supplanted the tenets and goals of economic Marxism with a new emphasis on “social justice.”

Our participants include Michael Anton, former member of the National Security Council, Marek Chodakiewiz, Professor of History at the Institute of World Politics, historian Ronald Radosh, a former Marxist and author of The Rosenberg File, and Michael Gonzalez, a senior fellow at the Douglas and Sarah Allison Center for Foreign Policy at the Heritage Foundation. On the left, the debaters are Bhaskar Sunkara, the founding editor and publisher of Jacobin Magazine, author and managing editor of Jacobin Micah Uetricht, Eric Blanc, an author and contributor to Jacobin and The Nation, and sociologist Nicole Aschoff, author of The New Prophets of Capital. The debate will be moderated by cultural historian Michael Walsh, author of The Devil’s Pleasure Palace and The Fiery Angel, who will discuss his personal experiences in Berlin when the Wall fell during a special lunchtime presentation.

9:30-11:00 – Debate 1, RESOLVED that Socialism/Communism remains a viable economic, social, and political system and just has
not been properly implemented yet.

12:00-13:30 – lunch, including video material on the fall of the Berlin Wall and a brief talk by Michael Walsh about his experiences in Berlin when the Wall came down.

14:00-15:30 – Debate 2, RESOLVED that Socialism/Communism, having failed repeatedly in the 20th century at the economic level, now seeks to implement its social goals via cultural Marxism.

-Michael Anton: Michael Anton is Lecturer in Politics and Research Fellow at Hillsdale College’s Allan P. Kirby, Jr. Center for Constitutional Studies in Washington, D.C. Prior to joining Hillsdale, he was the spokesman for President Donald J. Trump’s National Security Council. He also served as foreign policy and national security speechwriter for President George W. Bush in the aftermath of 9/11. Michael spent 12 years in the private sector in various roles in finance and media. His writings have appeared in the Wall Street Journal, the Washington Post, Foreign Policy and American Affairs, among many other publications. Michael caught the public eye as the author of a famous essay, “The Flight 93 Election,” published in the Claremont Review of Books, that galvanized many on the American right to vote for Trump in the 2016 election. That essay argued that Trump alone in a field of uniparty elites held the right stances on trade, immigration, and war.

-Michael Gonzalez: Mike Gonzalez, the Angeles T Arredondo E Pluribus Unum Senior Fellow at The Heritage Foundation, writes on national identity, diversity, multiculturalism, assimilation and nationalism, as well as foreign policy in general. He spent close to 20 years as a journalist, 15 of them reporting from Europe, Asia and Latin America. He left journalism to join the administration of President George W. Bush, where he was speechwriter for Securities and Exchange Commission Chairman Christopher Cox before moving on to the State Department’s European Bureau, where he wrote speeches and Op-Eds.

Gonzalez, who joined Heritage in March 2009, became a Senior Fellow in June, 2014 and a named fellow in 2019. He is a widely experienced writer and public speaker. He has written for National Affairs, The American Interest, Foreign Policy, The Wall Street Journal, The Washington Post, Time.com, The Hill, Forbes.com, USA Today, The Guardian, The National Interest, the Daily Signal, National Review and others. Gonzalez has appeared on Fox, MSNBC, PBS, the BBC, CNBC, NPR as well as many other networks and stations in the United States, Europe, Asia and Latin America.

Gonzalez got his first regular reporting beat in 1980, covering high school sports for one summer for The Boston Herald. He went to work for Agence France-Presse in 1987, reporting from around the globe for the news agency for six years, including covering the war in Afghanistan, where he traveled with the Mujahedeen in the late 1980s. In his first foreign assignment, in Panama in 1987, he was arrested, jailed overnight and expelled by the dictator Manuel Antonio Noriega.

After taking off two years to earn an MBA from Columbia Business School, he next logged 11 years with The Wall Street Journal, writing a column on the stock market in New York before being posted to Hong Kong in 1995 as deputy editor of the editorial pages of the newspaper’s Asia edition. Between 1998 and 2003, he served in the same capacity for the European edition in Brussels, before returning to Hong Kong as chief editorial page editor.

Gonzalez holds a bachelor’s degree in communications from Boston’s Emerson College and an MBA from Columbia Business School.

“A Race for the Future” How Conservatives Can Break the Liberal Monopoly on Hispanic American http://www.randomhouse.com/book/228486/a-race-for-the-future-by-mike-gonzalez—was released in 2014. His upcoming Book, “The Plot to Change America: How Identity Politics is Dividing the Land of the Free,” will be published by Encounter Books in 2020.

-Ronald Radosh: Ronald Radosh is Prof. Emeritus of History, City University of New York; Adjunct Fellow at the Hudson Institute, and an opinion columnist for The Daily Beast. He is author and co-author of over 20 books, including, The Rosenberg File, A Safe Haven: Harry S. Truman and the Founding of Israel, and a memoir, Commies: A Journey Through the Old Left, the New Left, and the Leftover Left. His articles and book reviews have appeared in major newspapers and magazines, including The New Republic, The New York Times, The Los Angeles Times, The American Interest, The Weekly Standard, National Review, The New Criterion, The Wall Street Journal and Commentary. His article, His article, “Paul Robeson: The Price of Self-Delusion,” appears in the current Nov.-Dec. issue of The American Interest.

In addition to numerous popular and scholarly articles, Dr. Chodakiewicz authored, co-authored, edited, and co-edited over fifteen scholarly monographs and documentary collections. His latest include Intermarium: The Land Between the Black and Baltic Seas (2012), which is a depiction of the Eastern Borderlands of the West on the rim of the former Soviet Union, and On the Right and Left (2013), which is a textbook of intellectual history of modern ideologies. He translated and edited the correspondence of the Ulam family of Lwów to the mathematician Stanislaw Ulam at Harvard from 1936 until after the Second World War and co-edited a selection of Ronald Reagan’s speeches published as My Vision of America in Polish.

His interests include the post-Soviet zone, the Second World War and its aftermath, Europe in the 19th and 20th century, Western civilization and its intellectual tradition, extremist movements in history, conspiracy theory and practice, and comparative civilizations.

-Micah Uetricht: Micah Uetricht is the managing editor of Jacobin magazine. He is coauthor of the forthcoming Bigger Than Bernie: How We Go From the Sanders Campaign to Democratic Socialism (Verso, 2020) and author of Strike for America: Chicago Teachers Against Austerity (Verso, 2014). He is the host of The Vast Majority, a Jacobin Radio podcast, and has written for the Guardian, the Intercept, the Nation, and elsewhere. He is a member of the Democratic Socialists of America and lives in Chicago.

-Eric Blanc: Author of the book Red State Revolt: The Teachers’ Strike Wave and Working-Class Politics (Verso 2019), Eric Blanc is a former high school teacher and currently a doctoral student at NYU Sociology. During the Los Angeles, West Virginia, Oklahoma, Arizona, Denver, and Oakland public education strikes, Blanc has been Jacobin magazine’s on-the-ground correspondent. He is a member of Democratic Socialists of America, has appeared on Democracy Now, and writes for The Nation and The Guardian.

-Nicole Aschoff: Nicole Aschoff is a writer, editor, and public sociologist. She is the author of The Smartphone Society: Technology, Power, and Resistance in the New Gilded Age (forthcoming Beacon Press) and The New Prophets of Capital. Aschoff’s writing has appeared The Guardian, The Nation, Dissent, Al Jazeera, and other publications. She is the managing editor of the Boston Institute for Nonprofit Journalism and an editor-at-large at Jacobin magazine, where she writes about technology, labor, and political economy. Aschoff received her Ph.D. in Sociology from the Johns Hopkins University where she studied the evolution of the global automobile industry, and taught sociology for several years at Boston University. She lives in Cambridge, Massachusetts.