on the topic of
The MISTRY* of PSYOP: Putting MISO in Perspective 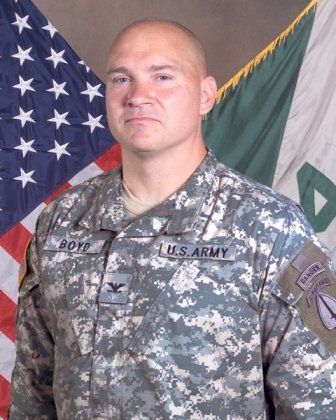 Colonel Curtis Boyd is the chief of staff at the JFK Special Warfare Center and School. In 1995, he began a series of operational tours in the 4th Psychological Operations Group, in which he has served as a detachment commander, group operations officer, battalion executive officer and group commander. His other special-operations assignments include information operations officer at the Joint Special Operations Command; deputy director of the SWCS Directorate of Special Operations Proponency; and commander of the 3rd Battalion, 1st Special Warfare Training Group. Commissioned as an Infantry officer in 1984, he served tours with Infantry units in Germany and at Fort Bragg, N.C. He has served in a variety of operations, including Just Cause, Desert Shield, Desert Storm, Uphold Democracy, Joint Endeavor, Enduring Freedom and Iraqi Freedom. In addition to holding a bachelor’s in interdisciplinary studies from Norwich University, Colonel Boyd is a 1992 graduate of the Naval Postgraduate School’s special operations and low-intensity conflict curriculum, a 1994 graduate of the Defense Language Institute and a 2006 fellow at Harvard University’s JFK School of Government.