You are cordially invited to an Asia Initiative Lecture Series (AILS) webinar presentation on the topic:
An Assessment of the Free and Open Indo-Pacific Strategy
with
Dr. Michael Green 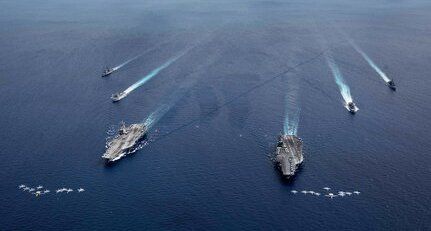 About the lecture: After 20 years of White House National Security Strategies premised on the hope that great power competition might be mitigated by cooperation with China on counter-terrorism, financial governance or climate change, the Trump administration announced unapologetically in its 2017 National Security Strategy that the United States is in strategic competition with China. The same year the State Department introduced the Free and Open Indo-Pacific strategy and brought back the US-Japan-Australia-India “Quad” to check Chinese expansion in the Indian and Pacific Oceans. No matter who wins the Presidency in November, these key pillars of U.S. strategy should continue. But serious changes are necessary or the strategy will fail. Over the next four years, the United States must re-invest in alliances, multilateral institutions, trade negotiations, and military deterrence or the framing of strategic competition with China will become hollow.

About the speaker: Michael Jonathan Green is senior vice president for Asia and Japan Chair at the Center for Strategic and International Studies (CSIS) and director of Asian Studies at the Edmund A. Walsh School of Foreign Service at Georgetown University. He served on the staff of the National Security Council (NSC) from 2001 through 2005, first as director for Asian affairs with responsibility for Japan, Korea, Australia, and New Zealand, and then as special assistant to the president for national security affairs and senior director for Asia, with responsibility for East Asia and South Asia. Before joining the NSC staff, he was a senior fellow for East Asian security at the Council on Foreign Relations, director of the Edwin O. Reischauer Center and the Foreign Policy Institute and assistant professor at the School of Advanced International Studies (SAIS) at Johns Hopkins University, research staff member at the Institute for Defense Analyses, and senior adviser on Asia in the Office of the Secretary of Defense. He also worked in Japan on the staff of a member of the National Diet.

Dr. Green is also a nonresident fellow at the Lowy Institute in Sydney, Australia, a distinguished scholar at the Asia Pacific Institute in Tokyo, and professor by special appointment at Sophia University in Tokyo. He is a member of the Council on Foreign Relations, the Aspen Strategy Group, the America Australia Leadership Dialogue, the advisory boards of Radio Free Asia and the Center for a New American Security, and the editorial boards of the Washington Quarterly and the Journal of Unification Studies in Korea. He also serves as a trustee at the Asia Foundation, senior adviser at the Asia Group, and associate of the U.S. Intelligence Community. Dr. Green has authored numerous books and articles on East Asian security, including most recently, By More Than Providence: Grand Strategy and American Power in the Asia Pacific Since 1783 (Columbia University Press, 2017). He received his master’s and doctoral degrees from SAIS and did additional graduate and postgraduate research at Tokyo University and the Massachusetts Institute of Technology. He received his bachelor’s degree in history from Kenyon College with highest honors. He holds a black belt in Iaido (sword) and has won international prizes on the great highland bagpipe.