You are cordially invited to a webinar presentation on the topic:
Lessons for Strengthening America at Home and in the World
with
Mr. Joseph F. Johnston, Jr. 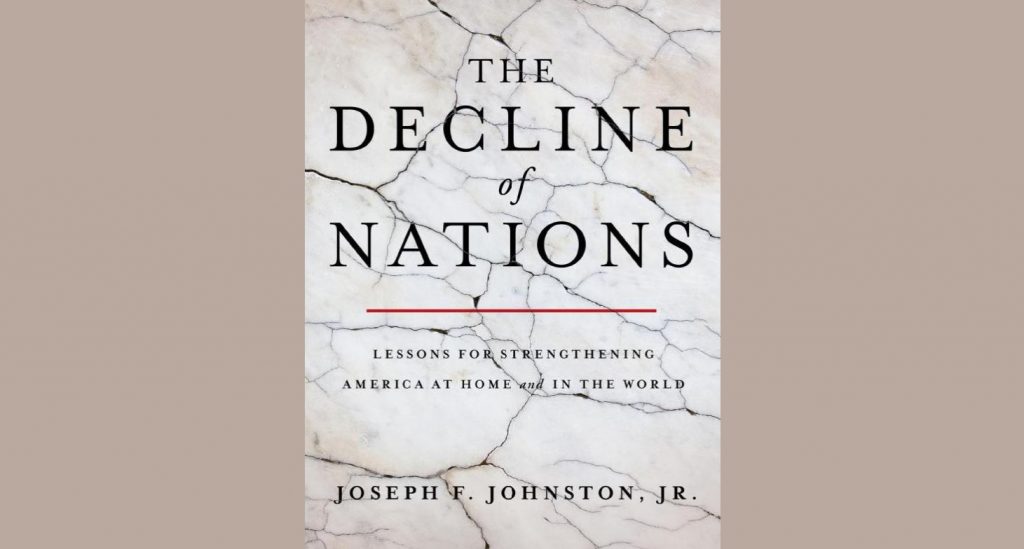 About the book: The Decline of Nations takes an in-depth look at the condition of the contemporary United States and shows why Americans should be deeply concerned. It tackles controversial subjects such as immigration, political correctness, morality, religion and the rise of a new elite class. Author Joseph Johnston provides many historical examples of empires declining, including the Roman and British empires, detailing their trajectory from dominance to failure, and, in the case of Britain, subsequent re-emergence as modern day nation. Johnston delivers riveting lessons on the U.S. government viewed through the lens of excessive centralization and deterioration of the rule of law. He demonstrates the results of weak policies including the surging Progressive movement and the expanding Welfare state. In The Decline of Nations, Johnston asks important questions about diminished military capacity, a broken educational system, and the decline of American arts and culture. He questions the sustainability of the nation’s vast global commitments and shows how those commitments are threatening America’s strength and prosperity. There is no historical guarantee that the United States can sustain its economic and political dominance in the world scene. By knowing the historic patterns of the great nations and empires, there is much to be learned about America’s own destiny.

About the speaker: Joseph F. Johnston, Jr., is a graduate of Princeton University and received a master’s degree in history and a law degree from Harvard University. He practiced law in New York City and Washington, D.C., was a visiting lecturer at the University of Virginia law school and is a member of the American Law Institute. He is the author of The Limits of Government, published by Regnery Gateway. He lives in Alexandria, Virginia.