You are cordially invited to an Asia Initiative Lecture Series (AILS) webinar presentation on the topic:
North Korea: The Continuous and Growing Threat
with
Prof. John Sano 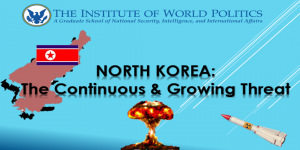 About the lecture: Despite recent and ongoing crises in Eastern Europe, as well as in the Taiwan Straits, North Korea continues to aggressively advance its nuclear weapons and ballistic missile programs, representing a substantial threat to not only the region, but to the international community as well. Repeated efforts at diplomacy, e.g., The Six Party Talks, or more coercive approaches, such as sanctions have done little to dissuade Pyongyang from its dangerous path. Unquestionably the most reclusive country in the world with a growing arsenal of ballistic missiles and an expanding trove of nuclear materials, Korea represents a perennial foreign policy and intelligence problem.

About the speaker: Prof. John Sano spent 28 years in the Central Intelligence Agency and was appointed the National Clandestine Service’s (formerly the Directorate of Operations) Deputy Director in November 2005 by then DCI Porter Goss. Prof. Sano came to this position after having previously served as Chief of the East Asia Division in the Directorate of Operations from January through November 2005.

As Deputy Director, Prof. Sano chaired the NCS’ Senior Leadership Team and oversaw the day-to-day management of the country’s Clandestine Service. In addition, Prof. Sano was an active member of the CIA’s Executive Management Team and regularly briefed senior Administration as well as Congressional Committee members on matters of national security and worldwide covert operations. Through his extensive interaction with other senior Intelligence Community members to include the National Security Council and Congress, Prof. Sano played an integral role in the establishment and direction of the newly formed NCS.

Previous positions within the CIA included serving as a Chief of Station in two foreign and one domestic location, as well as nearly 15 years of overseas experience in Asia, Eastern Europe and the Middle East. Among other senior assignments, Prof. Sano was the CIA’s chief of North Korean operations in the early 90’s and directed the CIA’s efforts during the Balkan conflict in the mid-90’s.

A recipient of the Donovan Award (the NCS’ highest award), Prof. Sano has also been presented the Director’s Award, the Balkans Service Medallion, the Exceptional Intelligence Collector Award and the Distinguished Career Intelligence Medal by Directors Robert Gates, George Tenet, Porter Goss, and Michael Hayden. Prof. Sano was also awarded the Diplomatic Order of Merit in 2002 by the President of the Republic of Korea.